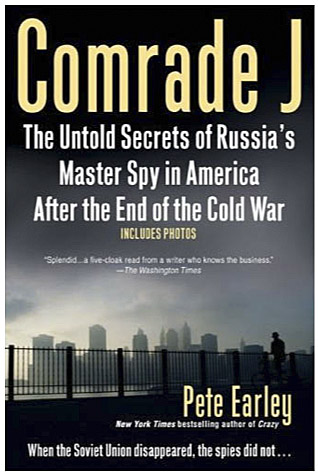 This is the second time I have read and perused this magnificent book — and what a momentous and timely book it is! The book reads much like a cliffhanger spy novel, though its nonfiction and its information is true and disturbing. The message is as timely today as it was in 2007 when it was first published.

After World War II, it took the valiant efforts of the Russian defector, code clerk Igor Gozenko, to awaken America and her allies to the fact that Uncle Joe, the greatest mass murderer in history, and our Russian communist friends were conducting serious, devastating espionage against the United States (e.g., atomic secrets among others) at the same time that we were providing the Soviets with vital economic and military aid during “The Great Patriotic War” against the Nazis.

The Berlin Wall comes crashing down in 1989 and the Soviet Union collapses in 1991. Again, the Russians were said to be our friends and allies in the war against (Islamic) terrorism. Even a professor wrote enthusiastically that we had reached the end of history, so humanity has to become reconciled to live peacefully under a soft blend of global socialism and capitalism. Now enters Russian master spy defector Sergei Tretyakov of the New York Rezidentura of the SVR ( the former First Chief Directorate of the KGB) to rain on this optimistically dystopic parade.

And Tretyakov is no ordinary spy of the Communist era. He is the first KGB/SVR officer, who was actively spying for the new Russia after the collapse of the Soviet Union, to defect to the USA. According to a senior FBI agent involved in the case, Sergei Tretyakov “has been by far the most important Russian Spy that our side has had in decades…I can tell you this man saved American lives.” It has taken again a courageous Russian defector, who risked his life for many years for the benefit of freedom, to reawaken America to the fact that in addition to the wars in Afghanistan and Iraq, the world remains a dangerous place. We learn painfully that the New Russia has not shed entirely its expansionist and authoritarian tendencies. The new subtle threats to former Soviet Republics, such as the Ukraine and Azerbaijan over natural resources and “privileges in the area,” not to mention the recent War on Georgia, remain serious threats to peace and world security.

I will not divulge here what specific intelligence Tretyakov provided to the United States, but will let the reader enjoy thoroughly the suspense packed in this book. And yet, the discerning reader will learn that the perceptive and resourceful Comrade J (Jean) Sergei Tretyakov has additionally provided nuggets of intelligence and geopolitical insights into some of the countries in this very volatile part of the world, where natural resources abound. Even on Turkey, an old friend of America, but now a country that is drifting away from the West by the inadequate diplomacy of short-sighted politicians, Tretyakov provides information about attitudes that are worth studying by Western diplomats.

In short, this is without reservation a thumbs up review for a very powerful book. Pete Earley’s book is highly recommended, not only for avid readers of Russian espionage, but also for the informed public in general, not to mention American and Western policymakers — who need to study this book the most!

Originally published on Amazon.com on July 6, 2010 by Miguel A. Faria, Jr., M.D., Former Editor-in-Chief of the Medical Sentinel (1996-2002), Editor Emeritus, the Association of American Physicians and Surgeons (AAPS); Author, Vandals at the Gates of Medicine (1995); Medical Warrior: Fighting Corporate Socialized Medicine (1997); and Cuba in Revolution: Escape From a Lost Paradise (2002).