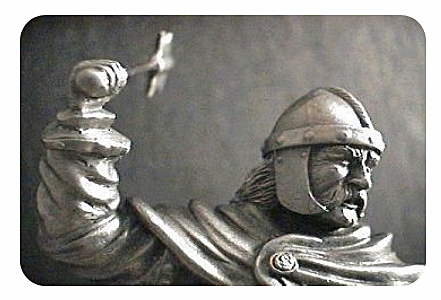 Charles Martel, Where Are You? by David C. Stolinsky, MD

Recently we observed — or rather, failed to observe — two important anniversaries. The first was October 12, Columbus Day, which we largely ignore. The second was October 10 or 11, the approximate date of the Battle of Tours, which we ignore entirely.

Charles Martel won the Battle of Tours in 732, which saved Europe from the Muslim expansion beyond Spain. Martel’s Frankish army defeated a Muslim army, which until then had crushed all resistance.

The Battle of Tours earned Charles the name “Martel,” because of the relentless way he hammered his enemies. If he had lost at Tours, Islam would have overrun France, and probably the remainder of Christian Europe.

“Martel” is Old French for “hammer.” Students of history know that in order to preserve your nation, your culture, your religion, and your very life, sometimes what you need is not a conference table, but a hammer. In addition to defeating the invading Muslim army, Charles Martel was the grandfather of Charlemagne. Students of history also know that in order to have great descendants, you need to have any descendants.

Periodically, unrest including rioting grips many European cities. Thousands of cars and scores of buildings were burned. Thousands of young men were arrested, mainly young Muslims of Algerian or African descent, but mainly born in Europe. You see, most immigrants know how lucky they are to have escaped the tyranny of their former nations and live in freedom. But their sons and grandsons don’t know how lucky they are.

In contrast, European welfare states have chronically high unemployment rates. Socialism is good at paying unemployment benefits, but not so good at creating jobs. Job growth in Western Europe is low. With few jobs available, applicants with French names often are preferred. And with generous unemployment benefits, young Muslim men may choose to collect benefits rather than risk repeated rejection of job applications.

Socialism fosters a sense of childish helplessness: “The government is responsible for my well-being; I’m not.” Besides, unlike Americans, Europeans are not good at integrating immigrants. An American who has lived there for decades often is still referred to as “the American.” How much more would this be true for someone with a darker skin and an odd-sounding name?

Unless you’re playing poker and are a good bluffer, you can’t beat something with nothing. Europe’s beautiful cathedrals are almost empty of worshippers. But the mosques are full. Most Europeans are Christians in name only — they have no deep beliefs. How can they hope to resist the onslaught of people with strong beliefs, some of whom are fanatics?

The form of Islam preached by Saudi-trained imams, and taught by Saudi-published books, tells followers to avoid befriending or imitating “infidels,” but instead to keep to their own ways and their own people. And the more radical among them preach the inevitable conquest of the world by Islam.

So what do you get when you combine chronic unemployment, degrading welfare payments, racial and ethnic discrimination, and resistance to integration by both the natives and the immigrants — and then you add a fanatical belief system and a fierce contempt for European culture? You get burning cars, and eventually burning cities.

It’s a truism that oil and water don’t mix. But it’s also true that when you touch a match to the oil, you get a fire. The French and other Western Europeans sat for decades watching more oil pouring in, and did nothing. What could they do? Their own birth rates have fallen below replacement levels. They need immigrants with high birth rates to supply young people, who would — it was hoped — pay into the health-care and pension funds that the native Europeans count on. But at the same time, the native Europeans did little to mix the oil. So there it remained, a flammable underclass.

We can learn from the Europeans’ mistakes:

As for the Western Europeans, the future remains in serious doubt. They need a new Charles Martel. Thus far, none has appeared on the horizon. All we can do is hope, because we can’t save them again. We could save Western Europe from Hitler and Stalin, but we can’t save it from its own cowardice and spiritual emptiness.

President Obama claimed repeatedly that Al Qaeda is “decimated” and “on the run.” Last year, he declared that the global war on terrorism is over. Apparently it escaped his attention that the day before, Drummer (Private) Lee Rigby, a 25-year-old British soldier, was hacked to death with a meat cleaver — on a London street, in broad daylight, in front of several witnesses — by two men shouting “Allahu akbar.” Both were of Nigerian descent, but were born in Britain as Christians. They converted to Islam and were radicalized in British mosques.

If we allow the situation to deteriorate beyond a certain point, even a new Charles Martel cannot save us. Exactly where that point is we do not know in advance, but in retrospect it will be painfully obvious.

Even now we see ISIS conquering large areas of Syria and Iraq. Fallujah and Ramadi have fallen (remember the names?), and ISIS is reported at the outskirts of Baghdad. Does that sound like the war on terrorism is over? More to the point, does it sound like we won?

For a war to be truly over, one side must destroy the other side’s ability to wage war, or both sides must agree to peace. But if only one side declares the war is over, it is called surrender.

If we don’t emulate Charles Martel, eventually we may be forced to emulate Lee Rigby. It’s our choice.

This article may be cited as: Stolinsky, DC. Charles Martel, where are you? HaciendaPublishing.com, October 30, 2014. Available from: https://haciendapublishing.com/charles-martel-where-are-you-by-david-c-stolinsky-md/.