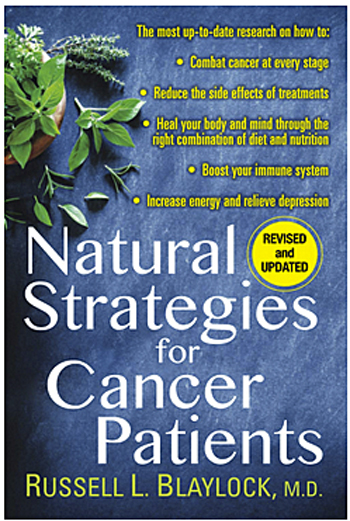 Natural Strategies for Cancer Patients (2019) by Russell L. Blaylock, M.D. is a fascinating book. Among the items discussed are notions that are simple but have a great impact on understanding the failure of common treatments. For instance, in many cancers the daughter cells make up a large number of the malignant cells that have no ability to divide and thus are not dangerous, except in that they take up physical space.

It is only the cancer stem cell found here and there that has the ability to produce more daughter cells. So, in traditional neurosurgical de-bulking operations, a surgeon is mostly removing daughter cells causing physical pressure on the brain, and of course this improves the patient’s health instantly. But these cells couldn’t divide, so the surgeon probably  may not eradicate the cancer stem cells that actually give rise to the type of cells removed. The stem cells are few, so their direct pressure effects are almost nonexistent; yet these more primitive cells will quickly replenish the non-dividing, mature cells that the surgeon was not able to extricate with conventional surgery. This is the problem that Dr. Blaylock explains so succinctly. If the surgeon cannot get rid of the cancer stem cells, then the cancer cannot be cured because the stem cells will replenish the mature cells and the malignancy quickly returns.

The ketogenic diet associated with protection against carcinogenesis is well discussed in the book. Dr. Blaylock explains the role that mitochondrial respiration plays in carcinogenesis. Also noted is how caloric restriction (CR) mimics the ketogenic diet and why that approach is anti-neoplastic; and for the same reasons, it will partially reverse the course of dementia, even in an already pathologically atrophic brain.

Dr. Blaylock’s regime is to be taken in association with chemotherapy and other conventional treatments. A patient with adenocarcinoma of the colon for example would require nutritional supplementation. A standard treatment would consist of nutritional mixes discussed in his book. It requires careful adherence to the program, as to diet and the natural anticancer compounds. The fruits and vegetable are powerful, but according to Dr. Blaylock, not sufficient. The most effective supplementation, according to Dr. Blaylock, consists of the careful intake of nanocurcumin, nanoboswellia, nano-silymarin and nano-quercetin. Iron levels need to be closely followed with an iron panel, not just a hemoglobin and hematocrit. Excess iron should be chelated without causing anemia.

Chemotherapy for glioblastoma multiforme is limited, so nutritional supplementation is mandatory in conjunction with the ketogenic diet. According to Dr. Blaylock, apigenin plays a major role in protecting the GI tract and has significant anticancer effects. Ashwagandha in combination with astragalus, dramatically increases cytotoxic lymphocytes and M1 type macrophages — the most important and the main anticancer leukocytes against most malignancies.

Metastatic disease is known to occur, but is not common in primary brain tumors. Dr. Blaylock also suggests ways of closing the pores cancer cells make in the basement membranes of their feeding vessels during angiogenesis. They will also generate these holes in vessels they have hijacked from the organs they are growing in. This is so a cancer stem cell can slip into a hole and travel hematogenously to set up a metastatic colony far distant from the primary. If the holes are closed, they cannot gain access to the blood in order to do this. An extract from grape seed will serve this function.

The patient should be tested for Helicobacter pylori, which is found in a large proportion of patients. And to stimulate the anticancer immunity, beta-glucan should be taken in a dose of 500 mg taken twice a week on an empty stomach. The patients need and should read his book for details, and of course, they must check with their physicians before undergoing this regimen. A seminal article by Dr. Blaylock should also be consulted by physicians involved in these types of cases.

Dr. Blaylock’s explanation of the etiology of cancer and the association with mitochondrial respiration is in line with the theory behind caloric restriction and the citric acid cycle (CAC). A link between ketogenic diet and glioblastoma regression becomes elucidated in conjunction with activation of genes coding for amino acids, long chain fatty acids, and other classes of metabolites in the brain with known neuro-protectant properties. Also. by reducing total caloric intake, the citric acid cycle has less access to glucose. When this occurs, it tends to generate ketone bodies to use as fuel. That means the CAC is less active, and so then are the mitochondria. If they are respiring less, they are producing less free radicals, so nearby DNA in the neuronal and astrocytic nucleus and mitochondria are less susceptible to damage. Much of this is thought to apply to neurodegenerative diseases as well.

Natural Strategies for Cancer Patients is a tour de force in nutritional supplementation in cancer treatment and is a definite must for both patients and their oncologists, as well as for all of us who have an interest in preserving our own health and those of our families. I highly recommend this tome without reservation. Get this book and read it.

This article may be cited as: Bogart, AR. Book Review of Natural Strategies for Cancer Patients by Russell L. Blaylock, M.D. HaciendaPublishing.com, August 12, 2019. Available from: https://haciendapublishing.com/book-review-of-natural-strategies-for-cancer-patients-by-russell-l-blaylock-md-reviewed-by-adam-r-bogart-phd/.