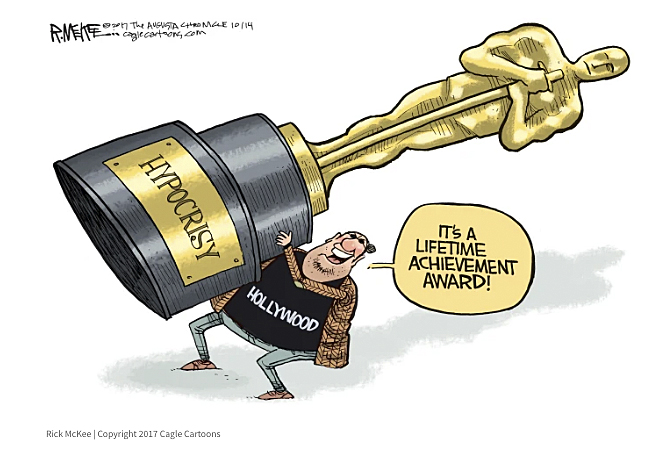 Contemporary popular culture and the antiheroes of the Hollywood Left by Russell L. Blaylock, MD

In the wake of the outrageous film, “The Hunt,” about cruelly hunting Trump followers as the “deplorables” by the liberal elite, it is worthwhile, once again, to point out, not only Hollywood’s progressive hypocrisy, but also the vulgarity and depravity of Hollywood and the socialist elite pushing for gun control while glorifying violence!

During the sixties the social media elite created the idea of the antihero, an unshaven drunkard, foul mouthed, irreligious, crude, violent, and of course, divorced. He lives in a unkempt room in a boarding house or rundown apartment and chain-smokes between eruptions of foul language and filthy one liners. His clothes are disheveled as is his hair, and he stumbles about the room in a vain effort to clear the alcoholic stupor from his addled brain. Then suddenly he becomes the standard bearer of a carefully chosen moral crusade that he pursues throughout the rest of the movie — which is shot by an idiot director who thinks filming by an equally drunk cameraman with a swaying, jerking camera, is a reflection of brilliant modern cinematography. This new thinking has taken over the film industry so that now our youth feel that to be socially acceptable and cool — they must imitate the antihero.

The girls in these movies all talk like sailors, wear clothes that would embarrass a street walker, and look upon virginity as a disgusting disease that much be immediately rendered obsolete. This is done by taking said virtuous young damsel and introducing her to the wonderful world of uncommitted sex with a drug-addled, nitwit young man who speaks in fragmented, unintelligible sentences and strange utterances and whose hair is arranged in a series of spikes with their tips painted bright orange. The guys speak to the girls as if they hated them and never does one witness any sign of chivalry or even good manners expressed toward the young lady, no matter how beautiful she may be. When I grew up, to have a beautiful girlfriend brought all the best manners out in her date. One was very careful to always be complementary and never insult your date in any way. Now, it is if the guy could take her or leave her and she tolerates all of his crude behavior as if it were a point of attraction. In fact, women are told that the best date is the “bad boy”. This of course is the social misfit who has a prison record, likes to physically abuse his women, and sports a number of tattoos depicting sexual themes or violence.

Social engineering by the Hollywood Left

Of course throughout the film we are exposed to every left/liberal cliche and bits of condensed dogma that they can squeeze into a one and a half hour film. Each film is designed to contain at least one example of the many leftist causes — that is, at least one homosexual couple, a Catholic priest who is a pedophile or a Baptist preacher railing against sexual sin, a handicapped person who is mistreated by a compassionless conservative (spouting Nazi slogans), an environmentalist railing against capitalism, and of course all positions of power in the film — the sheriff, the chief of police, the mayor, the head of the CDC, the chief of surgery — are all either women, who are arrogant and domineering and without question in charge, or blacks proudly spouting leftist, politically correct snippets. These icons of the left are rarely portrayed as religious or, heaven forbid, conservative. Yes, there are conservatives in each of these positions and a growing number of black police chiefs who are quite outspoken in their conservatism. And there are a number of women conservatives in powerful positions who are gentle, sweet, compassionate, Christians or Jews.

The left is always railing about stereotypes yet no one in our society resorts to stereotypes more than the left — all Southerners are portrayed as uneducated, racist, violent, morons with at least three missing teeth up front and married to their sisters or first cousins. This is especially true of movies about Mississippi — I have even heard it said that Southerners are so stupid that they don’t believe in evolution. To the leftist movie makers and TV programmers, all religious people are hypocrites and closet perverts.

Speak of hypocrites, the left tell us that we must do something about drugs as it is destroying our youth, yet they not only forget that it was they who introduced the youth to the wonderful world of drugs during the sixties, but they also have the main characters in their movies lighting up and passing around weed and using other mind-altering drugs. They scream for gun control, yet all of their movies are filled with gun violence. They are all for birth control and abortion but they have every female in their movies portrayed as a nymphomaniac, bed hopping girl who uses language like a valley girl. All families are dysfunctional and dad is either out of the picture or a babbling nitwit. The children are all wise and we can always depend on them not only having all the correct answers but saving the day at the end of the tangle of poor writing and spasmodic camera work. In each family, we have to suffer through the loud, obnoxious, troubled child most often dressed in his or her all black gothic uniform, waxing eloquent on the evils of life in the United States which leaves them at the point of suicide. Of course, of all the other “normal” family members, they alone are the compassionate, open minded, considerate and empathetic member of the family and they possess a wisdom of the neoplatonist professor.

This is but a glimpse of the world that the left has created with its vision of utopian bliss. As we have witnessed in Russia, Eastern Europe, Cuba, Southeast Asia, China, Venezuela, Brazil and dozens of other countries, utopian collectivism does not bring about utopia — it brings about the destruction of society — anarchy — which is the foundation of totalitarian dictatorships.

This article may be cited as: Blaylock RL. Contemporary popular culture and the antiheroes of the Hollywood Left. HaciendaPublishing.com. March 10, 2016. Available from: https://haciendapublishing.com/contemporary-popular-culture-and-the-antiheroes-of-the-hollywood-left-by-russell-l-blaylock-md/.