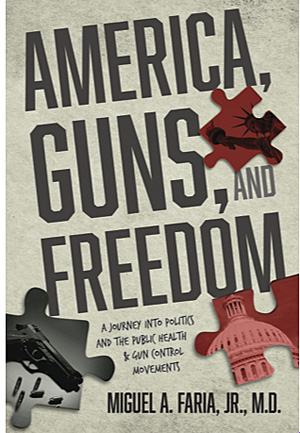 As gun rights and gun control advocates, political surrogates, spokespeople and other groups contemplate the future of the Second Amendment to the Constitution, Dr. Miguel A. Faria, Jr., M.D. has published a book that provides extensive background, history, context, and insight into the politicization of Second Amendment-related research over the last decade.

Faria has painstakingly detailed the politicization of academic research on the issue of guns and public safety, which he saw firsthand in the academic community and the federal government. Specifically, he criticized the Centers for Disease Control (CDC) for permitting politicized pro-gun control (and by extension, anti-gun rights) research for years, until Congress nixed the politically-charged research by passing bipartisan legislation in 1996.

As editor of the Journal of the Medical Association of Georgia, he read other medical journals’ published research and noted the multiple survey and research flaws that went unnoticed by other editors and the authors themselves, such as selection bias (i.e., selectively choosing data points that would validate a hypothesis). For example, Dr. Faria criticized the scientific procedures (such as selection bias) behind at least one particular gun violence survey, which claimed that guns led to significant increase in violence in Vancouver, Canada and in Seattle, Washington. Dr. Faria debunked the survey’s conclusions because the survey’s data was flawed. He also discovered that the survey ignored racial and ethnic data that would lead the survey to the opposite conclusion. The original conclusion was that more guns in cities led to more homicides, but when accounting for the missing data, that conclusion was fictitious at best.

The book informed readers that, for the most part, scientists received federal grants to conduct biased and incomplete gun violence research, which he helped debunk and spurred Congress to defund. Faria named several prominent gun research scientists who were unapologetic about their gun control advocacy, and claimed those scientists injected their own hypotheses about gun violence into their federally-funded research.

President George W. Bush appointed Faria to a grant review committee position within the National Center for Injury Prevention and Control (NCIPC) at the CDC, in part based on his longtime criticism of the CDC’s alleged pro-gun control advocacy research. During his appointment, he helped reform the CDC standards to eliminate any potential partisan bias in their grant-making processes.

Faria also outlined the decline of the once-prestigious American Medical Association (AMA), noting that many doctors have left the dues-based organization because of its politicization on issues such as gun violence. Due to the growing influence of gun control advocates in the medical community, the AMA dove headfirst into the politics of gun violence and has not turned back since then. One of the groups that Faria became very familiar with was Doctors for Responsible Gun Ownership (DRGO), which opposed politicizing gun violence as medical professionals.

Faria’s book was an insightful and informative read because of the detailed information it laid out for the reader. Despite the media’s feigned ignorance about the ingrained biases at the CDC and the research profession, Faria exposed their misinformation and propaganda campaigns at their very core by revealing the CDC as part of the partisan, ideological battle to disarm law-abiding Americans.

Spencer Reed Irvine graduated from Brigham Young University in International Relations and currently works as a staff writer for Accuracy in Media.

This book review originally appeared in Accuracy in Media’s AIM Report, March 2020, XLVIX-3, p. 4, and in Accuracy in Academia (academia.org) on April 27, 2020. It is reprinted here for the enjoyment of our readers at HaciendaPublishing.com.