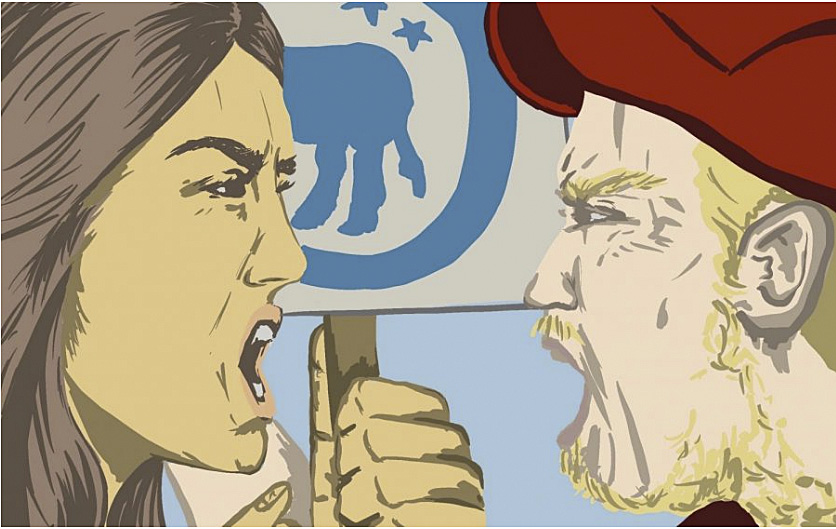 Are the Democrats and Hollywood celebrities or Trump responsible for the country’s climate of divisiveness and political violence? by Miguel A. Faria, MD

In a previous article, we discussed how the mainstream liberal media has waged a propaganda war against President Trump, blaming him for the divisive political climate and the violence it foments. We mentioned the media allies, such as Hillary Clinton who had stoked the fire of polarization and had been targeted by accused mail pipe bomber Cesar Sayoc. Another radical Democrat, Rep. Maxine Waters (D-CA), who was also targeted, deserves special mention. Waters, claiming that God was on her side, urged her followers:

“If you see anybody from that [Trump] cabinet in a restaurant, in a department store, at a gasoline station, you get out and you create a crowd, and you push back on them, and you tell them they’re not welcome anymore, anywhere.”

Soon after, White House Press Secretary Sarah Huckabee Sanders was denied service at the Red Hen, a Lexington, Virginia restaurant. Likewise, Homeland Security Secretary Kirstejen Nielsen was harassed while having a work dinner at a Mexican restaurant in Washington, D.C. Imagine anyone harassing and denying Maxine Waters service in a restaurant anywhere!

It was only after those types of incendiary and uncivil remarks and actions that President Trump reacted to the attacks. For example, in his tweet he responded, “Congresswoman Maxine Waters, an extraordinary low IQ person,” and admonished her to “Be careful what you wish for Max!” (June 25, 2018) Unlike most other people, particularly overly decorous conservatives, President Trump refuses to take it lying down, and rightfully so. Because the president won’t submit to intimidation, the media fear and hate him, neglecting their public responsibility to act objectively, justly and fairly.

Former U.S. Attorney General Eric Holder was another “high profile Democrat” targeted by Sayoc. At a Georgia gubernatorial campaign event for radical Democrat candidate Stacey Abrams, Holder vociferated, “Michelle [Obama] always says ‘When they go low, we go high,’ No. No. When they go low, we kick them.” With good reason, these radical Democrats have been referred to as “an angry violent mob,” not by the media, of course, but by outraged commenters on websites and voters at the polls.

Even before Trump’s election, a mentally deranged British subject, presumably inflamed by the “inflammatory rhetoric” of the left, attempted to assassinate Donald Trump when he was only the presumptive nominee of the Republican Party (June 18, 2016).

According to the Daily Mail, in the first weeks after President Trump took the oath of office, more than 12,000 tweets called for his assassination. On May 30, 2017, actress and comedian Kathy Griffin posed for a photographer with a bloody and decapitated head of President Trump in effigy. Rather than condemn her, as done with conservatives who step out of line even with insignificant gaffs, the liberal intelligentsia, for the most part, called Griffin’s potential incitement to violence “a form of artistic expression.”

The unprecedented hatred against the president continued with little condemnation from the media. On August 17, 2017, Missouri State Senator Maria Chapelle-Nadal called openly for the assassination of Trump in a Facebook post. But she has not been the only person to do so in a public forum. Amazingly, the New York Times recently (October 25, 2018) published a fictionalized piece on the assassination of President Donald Trump. Despite public outcry, they have refused to take down the story. Imagine this mainstream media hatred visited upon Obama!

For avant-garde and progressive Hollywood celebrities, vulgar rantings and “inflammatory rhetoric” are also permissible — if directed at this president. Under any other circumstances, such utterances, by anyone else except Democrats, would be unpardonable political incorrectness potentially causing loss of job and livelihood. Robert De Niro, a former favorite actor of mine (but no longer so), displayed crude and tasteless vulgarity at the 72nd annual Tony Awards at New York City’s Radio City Music Hall when he twice spewed, “f- – k Trump” to an admiring celebrity audience (May 2018).

Back in 2016, De Niro had already expressed his desire to punch Trump in the face, proving that great talent in an actor is not necessarily reflective of a high or even an average IQ. At least 15 actors have confirmed my observation openly admitting fantasizing about perpetrating violence against the president. Among these, we find Rosie O’ Donnell, Madonna, Mickey Rourke, and other “iconic” progressive celebrities.

Now, who is really fomenting hatred and promoting a divisive political climate, stoking the fire of political violence, and who is only responding to attacks that others are so fearful of repelling? The answer should be obvious to those capable of rudimentary judgment — in the first instance, the radical left reflecting vulgar, mob mentality, and in the second instance, a president who remains undaunted in the face of unprecedented attacks against his party and him personally.

This article was first published in haciendapub.com on November 3, 2018 and because the asperity of the Democrats persists, reposted January 9, 2019 and June 8, 2019.

This article may be cited as: Faria MA. Are the Democrats and Hollywood celebrities or Trump responsible for the country’s climate of divisiveness and political violence?  HaciendaPublishing.com, November 3, 2018. Available from: https://haciendapublishing.com/are-the-democrats-and-hollywood-celebrities-or-trump-responsible-for-the-countrys-climate-of-divisiveness-and-political-violence-by-miguel-a-faria-md/