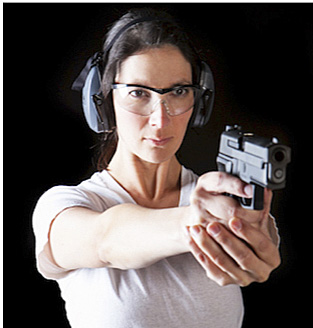 A Resurgent NRA Is Needed, Just As All Women Have a Right to Armed Self-Defense by Miguel A. Faria, MD

New Zealand and Australia like to brag about their purported success with gun control — essentially all guns in Australia, and the banning of military-style semiautomatic firearms in New Zealand. Their self-congratulatory pronouncements are more imaginary than real. Gun buy-back programs have not been a total success and violent crime persists in Australia, as it does in Great Britain and threatens to do in New Zealand.

New Zealand passed draconian gun control laws in April of 2019 in the aftermath of the Christchurch mosque shooting. Australia had done the same after the Port Arthur, Tasmania, tragedy of April 28, 1996, when a crazed assailant opened fire and shot 35 people.

Many New Zealanders in 2019 reacted just like Australians did in 1996. Passions were high and the government reacted quickly and without serious deliberation. Draconian gun legislation thus was passed in the heat of the moment in both countries. Neither Australia nor New Zealand had or have a strong national organization standing by to protect the rights of the people under such circumstances that could equal the National Rifle Association (NRA) in scope or Gun Owners of America (GOA) in tenacity — to protect their members from freedom destroying legislation, particularly knee-jerk responses to tragedy.

Australia, a semi-arid, isolated continent and a vast nation-state, in many ways parallels the history of the United States. In the 1850s and 1860s, it had gold rushes and pioneering settlers, reminiscent of our own western migration. In World War I and World War II, it fought with the allies. Australia remained a subject of Great Britain until 1986 when the last ties with the British crown were dissolved. With only 19 million people, Australia has an impressive fauna that includes plenty of varmints, marsupials, dingoes (that wreak havoc on livestock), as well as large rats and other rodents. Yet, hunting has become prohibitively difficult for all but a handful of Australians with private lands and the usual connections.

Now, the ban on firearms and the disarmament of ordinary Australians has left criminals free to roam the countryside as they please. Bandits, of course, kept their guns. Like in America, only the law-abiding by definition obey the law. The Australian government has responded to persistent violent crimes by passing more laws, and just two years later in 1998 Bowie knives and other knives and items, including handcuffs, were banned.

In Australia today, police can enter one’s house and search for guns, copy the hard drive of a computer, seize records, and do it all without a search warrant. It’s the law that police can go door to door searching for weapons that have not been surrendered in their much-publicized gun buy-back program. They used previous registration and firearm license lists to check for lapses and confiscate non-surrendered firearms.

The ban has also made it more difficult for women to be safe from predators or abusive partners. As noted in The Samurai, The Mountie, and The Cowboy by Dave Kopel, 25% of all homicides are spousal killings with 75% of men doing the killing. Australian men are less likely to use guns because bare physical force frequently suffices for killing their wives or girlfriends. Again 25% of men use no weapon at all.

On the other hand, women most frequently use a gun to defend themselves from abusing husbands, boyfriends, or sexual predators. Now with the strict gun ban, it is more difficult for women to defend themselves. This situation is somewhat similar to the US experience that men can kill during domestic violence with whatever tool is around, if not the bare hands and feet, but women need guns to protect themselves.

Therefore, the Australian experience is that banning firearms leaves women defenseless in the face of abusing husbands or boyfriends — men who ultimately end up killing them. In my book, America, Guns, and Freedom (2019), I also cite examples of women being killed by abusive husbands and boyfriends in the US while waiting to obtain the firearms they bought because of waiting periods and prolonged background checks.

As in Australia, British women have been disproportionally affected, with assault and rapes leading the crime wave. To make matters worse, women cannot defend themselves. Self-defense is not a valid reason to use weapons of any type. The only fully legal self-defense product in Great Britain currently allowed is the rape alarm. Women have been instructed not to display a knife or any other weapon in order to ward off a potential assailant.

With these absurdities in the laws, women continue to add to assault, murder and rape statistics, hapless victims, with no right to armed self-protection. When confronted by a rapist, British women have been instructed to run, and if outrun, to shout. The use of any type of weapon to fend off home invasion or to deter a rapist — knives, or God forbid, guns — is forbidden. If all else fails, the only item that a woman is permitted to use is a rape alarm!

This is the status, or rather the nadir of absurdity and injustice, that human dignity has reached for law-abiding citizens in Great Britain, where criminals are coddled, while alleged social and economic inequalities justifications are made for their crimes. Sadly, we have seen some of this occurring in the United States in the wake of the COVID-19 “pandemic” and the “peaceful protestors” in the George Floyd riots.

Women need the NRA, just as much as the NRA needs women to support it. Today the NRA is under heavy fire, and it needs our support. As we have seen, the NRA is still needed to protect our rights, so that we will not go the way of Great Britain, Australia or New Zealand. Yes, the NRA needs to do some hard work to get its house in order, but we should not join in to give aid and comfort to the sworn enemies of liberty, who wish nothing but its dissolution to make their job of gun prohibition easier.

The media I have learned is an excellent guide about who might be our friends, and conversely, our enemies. That the NRA is under heavy fire by the liberal media and their allies in the socialist Democrat Party should tell you something that is well encapsulated in the 4th century Arthasastra statecraft dictum, “The enemy of my enemy is my friend.” Think about it. They are not doing us a favor by disbanding it or reforming it to make it more efficient!

And returning to the even larger issue, the $64,000 question is whether citizens, particularly women of the Anglosphere nations, will wake up from their slumber, break away from the authoritarian leftist parties who take them for granted, and join the conservative parties of freedom.

That alone will go a long way, at least in the United States, to regain their dignity and their natural rights to life, liberty and the pursuit of happiness in an increasingly uncertain and dangerous world — and perhaps in time to make a difference in the crucial November presidential and congressional elections.

This article may be cited as: Faria MA. A Resurgent NRA Is Needed, Just As All Women Have a Right to Armed Self-Defense. HaciendaPublishing.com, August 13, 2020. Available from: https://haciendapublishing.com/a-resurgent-nra-is-needed-just-as-all-women-have-a-right-to-armed-self-defense-by-miguel-a-faria-md/.