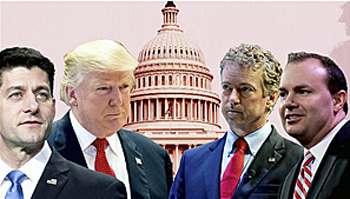 Of a fallen tree all make kindling, says the old proverb, and like most refrains, it conveys an element of truth. The fact the Republicans are having difficulty agreeing on a winning alternative plan to ObamaCare makes both the Senate and House proposals looming targets for critics. The Left’s ultimate goal is to dismantle the American health care system and turn it into an instrument for people control — the government as single payer, in other words, fully socialized medicine “as in all other industrialized nations.” And they have not been unsuccessful in this arena. Aided by the mainstream media, the debate keeps shifting leftward, and the Republicans, despite majorities in both houses of Congress, do not seem to have a winning strategy.

Towards lending support to the Democrats, pundits and propagandists have spread more than the fair share of half-truths.

A recent writer for example lamented that “millions of Americans who were able to purchase insurance since ObamaCare was enacted would lose coverage if either plan [the Senate or the House version] became law, and most of the savings from the tax cuts in their plans would be reaped by those with higher incomes.”

The first part of the statement is questionable and disingenuous. The vast majority, about 18 million out of the estimated 20 million in question, had only obtained health insurance by compulsion, to avoid the penalty imposed by ObamaCare for not having insurance. The rest have subsidized coverage paid by others saddled with higher premiums. The second part of the statement is even more disingenuous because those “reaping the savings” are merely the ones being allowed to save some of their own money, instead of subsidizing others. The GOP plans revoke these impositions and brings more freedom rather than wealth redistribution.

But the verbiage in the writer’s statement is typical Democrat rhetoric pushing the debate towards socialism rather than freedom. In another article in the same newspaper, we read, “reductions in spending are needed to pay for GOP proposed tax cuts.” How is that for turning ideas upon their heads and pervert their meanings? In liberal mantra, reduction of wasteful spending and returning money to those who earned it, is considered the government having to “pay” for the tax cuts. Whose money is it to begin with?

By sleight of progressive authoritarian hand and the naked force of sophistry over reason, suddenly, one’s money becomes the government’s, and those who want to keep their hard-earned money are accused of “reaping the savings” of tax cuts. And when the government returns their money, they call it “paying for tax cuts”!

Envy and class warfare are instigated to ignite passion in this rhetoric. Invariably, the liberal mantra elaborates that those “reaping the benefits” of tax cuts or those for whom the government “slashes benefits to the needy to pay for the tax cuts” are the wealthy. The reality is different: the majority, at least 53% or so of middle class Americans who most heavily carry the load of taxation, are those who would “reap the benefits” of less taxation and wasteful government spending. The super rich are too few to pull the wagon by themselves.

To the world at large, the 26 million presently uninsured Americans are misrepresented by the liberal media as being the most needy, “vulnerable,” and the poorest of Americans who still do not have access to medical care in the U.S. This of course is not true. One of the most vulnerable, our senior citizens, as we all know in America, are covered by the federal Medicare program, and the poorest Americans are covered by the state-run Medicaid programs. And the truth is that eliminating waste, fraud, and abuse in some of those programs would go a long way to better cover even more of those in need.

But the liberal media, even when wanting to appear objective, is not only biased but demands the debate be limited to the points that fit their agenda. For example, as we have seen, they refuse to consider costs and the concept of wealth redistribution in expanding coverage. And their arguments soon degenerate to passionate rhetoric to push for their pre-planned agenda.

The liberal media also avoids reporting human interest stories of waste, fraud, and abuse, and shuns presenting sober and responsible analyses of projected costs (except to project downward) — much less report the burden those social and health programs impose on the middle class who pay for them; or the burden placed on small businesses that are saddled with exorbitant insurance premiums for their workers. Consider the verbiage of yet another unsigned editorial in my local newspaper, the Telegraph (Macon; July 2, 2017):

“Though it [the Senate version of the GOP plan] would only throw 22 million people out of the health insurance door — it would save the government, by cutting Medicaid, $772 billion over ten years and it would eliminate $408 billion in subsidies for low income people, those captured by opioids, pregnant mothers, the disabled and the most vulnerable in our society…. They have yet to put a human face on the issue.”

How is that for advocacy journalism! But despite the alleged good intentions, as declared in the above statement of looking out for the vulnerable and low-income people, these entitlement programs are not without serious unintended and harmful consequences. For example, numerous studies have shown that many Americans in their prime of life and able to work are dropping out of the labor force because of the expansion of the welfare state. They simply prefer not to work and collect benefits. Others malinger, faking illnesses and injuries, to obtain fraudulent disability. One can search the vast literature on the subject (avoided by the media) or just simply watch Judge Judy on TV to ascertain the reality of the statement. In both cases the government-dependent population continues to increase, and those sharing the burden have a heavier and heavier wagon to pull.

Medicaid spending has increased dramatically both under the administrations of Presidents Barack Obama and George W. Bush. In 2000, Medicaid spending was $209 billion. By 2016, it had more than double to $575 billion. Americans with the lowest incomes and the “disabled” are not falling through the cracks as claimed. The deficit accumulated from this program alone is in the trillions of dollars.

As intimated earlier some, if not the majority, of the 26 million uninsured Americans includes a large segment of the middle class that is not eligible for either of those programs, a population that chooses to remain uninsured. This admittedly is because health insurance coverage is expensive. These Americans make the conscious choice to spend their money elsewhere because they consider themselves in good health. They believe that were they to participate in the government-approved insurance cartel, they would be subsidizing others, particularly those with pre-existing medical conditions.

Wise decision or not, under ObamaCare, these Americans chose to pay the penalty for not having insurance. People look after their self-interest, and in a free society, they should be allowed to do so, rather than being forced to participate in wealth redistribution schemes dreamed up by pandering politicians or conceived by others to forge presidential legacies.

Despite the impression created by the progressive-liberal media and even Hollywood celebrities, the health care problem is more about waging partisan politics and inciting class warfare by the Democrats and about furthering government control over individual Americans than it is about “people dying in the streets for lack of medical care” — another hyperbolic mendacity.

We have already mentioned Medicare and Medicaid. Veterans are covered by the Veterans Administration hospital system. True, many people complain about the VA system’s inefficiencies and waiting lists, but that is exactly what they will get with the single payer system of socialized medicine that liberals, behind their partisan politics, are striving to implement through the back door.

Truth be told, no one is being left behind. And as falsely claimed, no one is dying in the streets of America because of lack of access to medical care. That is an outright lie, even if it is implied or stated by a Democrat or Republican president. By federal law, anyone who seeks medical care at an American hospital has to be treated despite ability to pay.

Just disclosing this fact, making an effort to decrease their bias, and toning down the rhetoric, the liberal mainstream media could go a long way to improve the quality of the debate — and regain a portion of their damaged credibility.

Read Part 2 of this article

Miguel A. Faria, M.D. is a retired clinical professor of neurosurgery and long time medical editor. He is the author of “Vandals at the Gates of Medicine”; “Medical Warrior: Fighting Corporate Socialized Medicine”; and “Cuba in Revolution — Escape From a Lost Paradise.” His website is http://www.haciendapub.com.

Similar versions of this article have appeared in The Telegraph (Macon, Georgia), GOPUSA.com, and AIM. The AIM version was titled, “No Media… 26 Million People Won’t Die If ObamaCare is Repealed” and appeared on July 21, 2017.