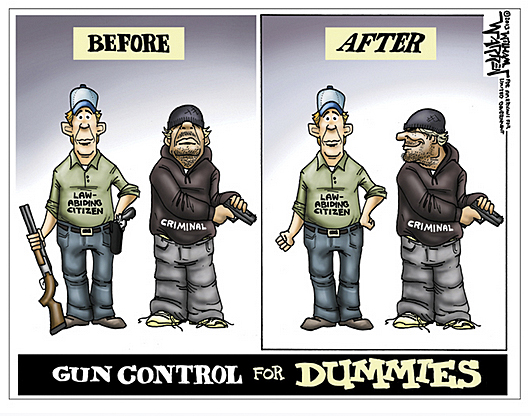 The real issue behind the gun control ‘debate’ by Russell L. Blaylock, MD

There are a couple of ways to look at the issue of the so-called gun control “debate.” One can take it at face value — the Leftists being truly concerned with gun violence and the emotional toll on our society and the conservatives wanting to protect individual rights or self-protection. Or one can see it as I do, a much grander plot — the ultimate and total control of society the world over. Unarmed citizens cannot protect themselves from the criminal elements in society, nor from a government that wishes to destroy individualism and institute a system of heavily regimented collectivism. The extreme Left will use any ruse or “crisis” to attain that goal. In Europe, I believe that the mass invasion of barbarians has the ultimate purpose of making society so ungovernable by existing means (nation-states) that the people will eventually demand the government create a police state (just as was done in Germany with the rise of Hitler).

The manufactured disorder will be so widespread (all of the European countries) that a superstate will be called for consisting of a world government, a world police force, a world court, and a world tax to finance the enterprise. People, being in a state of despair and absolute gripping fear, will clamor for such a superstate. The same will be done in the United States as criminal gangs get even more bold and violent; as we also embrace a mass invasion of the criminal elements from other countries south of the border; as the police forces in each state deteriorate; as racial tension rises (engineered); and as the economy begins to falter. The numerous wars that we are now engaged in the Middle East will add considerably to the argument for a world superstate.

World War I was supposed to be the catalyst for world government — the League of Nations — but failed. After World War II, we saw the second attempt with the United Nations, but it too has remained all but impotent. Piecemeal attempts at world government include the Atlantic Charter, the South East Asia Treaty Organization (SEATO), the European Union, and an attempt at an American Union, the North American Free Trade Agreement (NAFTA), the Central America Free Trade Agreement (CAFTA), and an assortment of other globalist schemes that have added to the move to the left. The globalists are now using the tactic of massive world chaos to convince the populations of the nation-states to accept world government and a world police state. Gun confiscation is essential to their plans, but they are not opposed if necessary to a bloody civil war to use as the final push before the guns are taken.

As for the same argument being used for both sides of the gun-control debate — it is true. Our side of the argument has gained considerable strength as the data have accumulated concerning crime statistics and guns. Their side remains firmly in the camp of emotionalism and as always with the Left — simplistic and therefore frequently providing totally idiotic solutions. It is true that to institute total gun control would require turning millions of decent, law-abiding citizens into federal criminals and felons. And it will result in the death by legalistic violence of tens of thousands of otherwise law-abiding citizens. That it will have little effect on reducing violent deaths has been shown many times, most recently in London, where the Islamic radical mayor has now moved from gun control to “knife control” as most of the murders are now by knife. And he has switched the policies regarding “stop and search”, something he campaigned against and cited as a violation of human rights in the past. The Left would never admit that the Second Amendment defenders were right all along — that is, the violent transgressors will just chose another weapon. One can envision the school shooter switching to cars plowing into crowds or the use of fire bombs — something that could kill even more young people and leave many horribly burned for life. As for the mentally ill issue — we must keep in mind who engineered the release of millions of mentally-ill from the safety of mental institutions. Also keep in mind who is promoting the legalization of marijuana and promoting psychotropic drugging of millions of very young people — proven to trigger violent behavior in a significant percentage.

What we see with great consistency is that the Left really cares little for those they use as examples for compassion; they use them to garner support for their cause. For example, they plead with tear-filled eyes for the poor animals that are being killed for food, but they smile idiotically when asked why they support abortion, even late-term abortions. We see a similar moronic response when they are challenged as to why they poured tears for a habitual felon who murdered a sweet black child sitting on her grandfather’s lap — but had no tears or any sign of compassion for the child or the child’s mother or grandparents. Their compassion is a tool of their revolutionary trade. A political philosophy that can defend the mass murder of hundred of millions of citizens (most from the lower class) has no claim to compassion. The Left is based on a psychopathic mentality that sees human beings as things to manipulate and control.

This article may be cited as: Blaylock RL. The real issue behind the gun control ‘debate.’  HaciendaPublishing.com. April 15, 2018. Available from: https://haciendapublishing.com/the-real-issue-behind-the-gun-control-debate-by-russell-l-blaylock-md/.