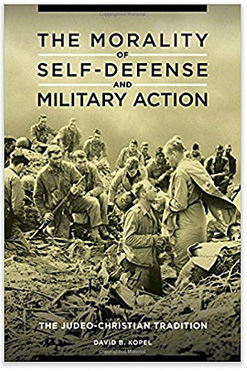 The moral philosophy of self-defense and resistance to tyranny in the Judeo-Christian tradition by Miguel A. Faria, MD

David Kopel’s monumental book, The Morality of Self-Defense and Military Action: The Judeo-Christian Tradition (2017) has not received the attention it deserves for such a well-researched and magnificently written tome. Kopel has succeeded in objectively discussing difficult and controversial topics of moral philosophy that spill into hotter political issues of armed self-defense and justification for wars and revolution, and he does this in an eloquent, logical, and enthralling fashion.

The morality of individual self-defense, collective rebellion in revolution, and engagement in collective military action are topics discussed succinctly and engagingly in this book, as justified by our Judeo-Christian inheritance, a main pillar of Western civilization. Kopel, who is a civil rights attorney and a constitutional law professor, not a moral philosopher (much less a moralist), has achieved what myriad other experts have tried to do but have failed because of preconceived notions, biases, and selective interpretation of Biblical passages and historical events, as well as political immersion while engaging in theological obscurantism. Fortunately, this is not the case with Kopel’s more tolerant approach and research that lead to the attainment of truth.

The book is divided into two major parts: Part 1 deals with the Old Testament and proceeds chronologically with the history of the Israelites, the problem of violence in the Hebrew Bible, the Old Prophets, the Diaspora, the Holocaust, and modern Israel. Part 2 discusses the New Testament, the Apostles and continues with Rome, the Middle Ages, the Reformation, Revolutions (including the American Revolution), Modern Christianity, the Quakers, and concludes with Modern Pacifism and its ramifications.

Kopel’s research leads him to quote religious and philosophic authorities, such as St. Augustine of Hippo (AD 354-430) near the time of the fall of Rome; John of Salisbury (1120-1180), Bishop of Chartres, a leader of the Early Renaissance of the 11th Century in which the Church refused to submit to government interference and claimed independence from the State; St. Thomas Aquinas (1225-1274), the great medieval scholastic philosopher, as well as the more radical Spanish Second Scholastics, including the Spanish Jesuits, Juan de Mariana and Francisco Súarez, who asserted categorically the right of revolution against tyrannical governments. These writers wrote that standing armies were inconsistent with free governments, but that citizen militias were essential to protect the natural rights of the people and prevent usurpation by kings or even elected bodies. These writings percolated from the Catholic world and in time found a home with Protestant leaders ushering in the Reformation.

Catholic teachings embrace Natural Law affirming the personal right to self-defense, particularly to protect the lives of others, especially those weak and defenseless. Supporting these views about Natural Law were the great writers of antiquity — Cicero (106-43 BC) and the rediscovered Aristotle (384-322 BC). The metaphysics and political writings of Aristotle were reconciled to Catholic dogma by St. Thomas Aquinas, while Rabbi Moshe Maimonides (1153-1204) attempted to do the same for Judaism. The right to self-defense extends from the individual and his household to the community, as to oppose government tyranny; and to nations, as to engage in Just wars to oppose aggression, as long as there is a chance of success and the number of casualties is limited.

People then have a right to self-defense, as well as a moral duty to defend their families and neighbors, and the community has a right to collective self-defense to curb or prevent tyrannical government. Arms are necessary to exercise those rights. And it is for that reason that governments, monarchical or elected, which have a tendency to be tyrannical, disarm the people. Liberty and the right to preserve life via self-defense are natural rights of the people — namely, gifts from God or Nature to man — and governments that attempt to circumvent those rights are no longer legitimate governments but usurpations. Bad governments and usurpations are already in rebellion against God and man, so the people have a legitimate right to self-defense in the form of insurrection to overthrow those governments.

These freedom concepts reached eloquence in the writings of John Locke (1632-1704), who added that the function of government is to 0protect the natural rights of the citizens, and those which did not, could legitimately be overthrown. Protestant leaders, including Calvin and Knox, believed that the right of violent resistance to governments that did not follow the precepts of God was legitimate. But they impose the caveat that intermediate magistrates must lead the people, who of themselves do not have that right. Usually support of the nobility then was necessary. But Locke, like Salisbury before him, affirmed that the right of violent resistance was inherent to all citizens and did not require intermediate magistrates.

Kopel correctly points out that all the strands of resistance to tyrannical governments and the assertions of natural rights theory — individual self-defense and collective right to revolution — united and reached fruition in Thomas Jefferson’s Declaration of Independence and the American Revolution that ended with the founding of the United States and the incorporation of the Bill of Rights in the U.S. Constitution.

The doctrine of Just Revolutions came from both extremes of Christian views — Catholics, as we have seen, and Calvinists, who adopted similar ideals, but not from Lutherans or Anglicans, who were more prone to preserve the status quo of government authority in northern Germany and Scandinavia, and in England, respectively. In the United States, the Anglican Church was loyalist generally, except in the South, while Calvinists sects were pro-revolutionist. The intellectual origins of the American Revolution have been said to have been influenced greatly by the ideas of John Locke and the Enlightenment, but they were also heavily influenced by Calvinist ideas coming from New England and distilled from John Knox and Presbyterianism stemming out of Princeton College under the direction of John Witherspoon (1732-1794). Kopel quotes Horace Walpole, the English politician, addressing Parliament: “There is no use crying about it. Cousin America has run off with a Presbyterian parson, and that is the end of it.”

Whig member of Parliament Edmund Burke (1729-1797) went further and admonished his fellow parliamentarians that the Americans were “not of submissive of mind and opinion,” and it would be best not to try to subjugate them. Burke, an intellectual father of modern conservatism, was correct. The Sunday sermons emanating from the pulpits of Protestant America in the years immediately prior to 1776 preached the message of rebellion and violent resistance to tyranny and likened the American colonists to the belligerent Israelites searching for the Promised Land of American Independence. The Americans could not be subjugated. And on April 19, 1775, the American militia met the British Redcoats at Lexington and Concord and as Ralph Waldo Emerson wrote in his Concord Hymn, “The embattled farmers stood and fired the shot heard round the world.”

Kopel’s book is momentous, not only because of important theoretical or academic considerations, but also for practical and more down-to-earth reasons: Too many thugs deny by their actions that human life is sacred, crime is rampant, and Islamic terrorists continue to carry out acts of savagery throughout the world. Innocent civilians are victims of mass shootings by deranged killers and terrorist suicide bombings and increasingly being plowed over by deadly moving vehicles driven by Jihadists. Christians in particular are subject to selective terrorist attacks in foreign lands. And yet we are constantly being told that citizens should not respond with violence to these frequently deadly and unprovoked attacks. Christian Scripture is often cited as invoking pacifism — e.g., “If someone slaps you on the right cheek, offer the other cheek also” (Matthew 5:39).

Kopel does not deny that some Biblical evidence can be found to support seemingly contradictory points, but he also reminds us that Scripture must be interpreted in its totality. Thus moral points cannot be made by isolated passages. Kopel writes: “… attempting to show that much of what the Bible has to say about the legitimacy and illegitimacy of violence can be read in a variety of ways all of which are reasonable good-faith interpretations.”

Conclusions based on the totality of the Scriptures — both in the words and actions of the historic Judeo-Christian religious leaders — can be drawn about the morality of self-defense, participation in Just Wars, and the justification for rebellion and revolution against tyrannical governments. Kopel’s conclusion is that self-defense is not only a personal right but also a moral duty, especially when protecting others, individually or collectively.

And as far as nations and soldiers engaging in a Just War — as initially proposed by St. Augustine and expounded upon by St. Thomas Aquinas to thwart aggression and prevent the imposition of evil governments — is not only permissible action but also a moral duty of good soldiers in order to preserve benevolent societies and eventually bring about lasting peace.

Bolstering Kopel’s conclusions is the Judeo-Christian tradition, encompassing the Hebrew Bible, particularly the first five written books called the Torah that discuss Jewish law; the Talmud, the Oral Torah given by Moses to the Israelites and written about 200 BC; and the subsequent rabbinical commentaries of the Middle Ages, particularly the Mishnah Torah penned by the medieval scholar and physician Maimonides and other Jewish authorities to the present day. In fact, Maimonides elaborated on the laws of self-defense and affirmed the right, not only of the homeowner but also of any other good citizen, to kill a burglar. The book extends the historical-philosophic narrative to the present state of Israel.

For Christians, the Judeo-Christian tradition includes the Old Testament and the New Testament, followed by the teachings of the Catholic and Orthodox Churches; the writings of the early Protestant leaders of the Reformation, including Martin Luther, John Calvin, and John Knox to modern Christian writers. Kopel does not neglect pacifist writers. They too have their say, but while their convictions and their intentions may be pure and good, their Scriptural evidence remains tenuous, their logic problematic, and their historical accuracy frequently lacking.

In the modern world, good citizens  of all religious persuasions in general and persecuted Jews and Christians in particular have the right to armed self-defense and the moral duty to defend themselves and their families from terrorists in this very dangerous world.

The Morality of Self-Defense and Military Action: The Judeo-Christian Tradition (2017) is highly recommended for moral philosophers, lawyers, sociologists, criminologists, and the lay public, and it would be of more than passing interest to citizens following or participating in the gun control and gun rights debate.

Miguel A. Faria, M.D., Associate Editor in Chief in socioeconomics, politics, medicine, and world affairs of Surgical Neurology International (SNI). He is the author of a three part series: Violence, mental illness and the brain — A Brief History of Psychosurgery” published in SNI and available at his website. His recently released book is America, Guns, and Freedom: A Journey Into Politics and the Public Health & Gun Control Movements (2019).

This article may be cited as: Faria MA. The moral philosophy of self-defense and resistance to tyranny in the Judeo-Christian tradition. Haciendapub.com, March 15, 2018. Available from: https://haciendapublishing.com/the-moral-philosophy-of-self-defense-and-resistance-to-tyranny-in-the-judeo-christian-tradition-by-miguel-a-faria-md/

The photographs used to illustrate this book review exclusive for Hacienda Publishing came from a variety of sources and do not appear in the author’s book. They illustrate this article for the extra enjoyment of our readers.

A shortened version of this article was published on GOPUSA.com on March 19, 2018.

This book review was also published in Surgical Neurology International on August 8, 2020 with an accompanying note by SNI Editor-in-Chief, James I. Ausman, MD, PhD. The book review may be cited as: Faria MA. The moral philosophy of self-defense and resistance to tyranny in the Judeo-Christian Tradition — A review of David Kopel’s The morality of self-defense and military action: The Judeo-Christian Tradition (2017). Surg Neurol Int 2020;11:241.

2 thoughts on “The moral philosophy of self-defense and resistance to tyranny in the Judeo-Christian tradition by Miguel A. Faria, MD”