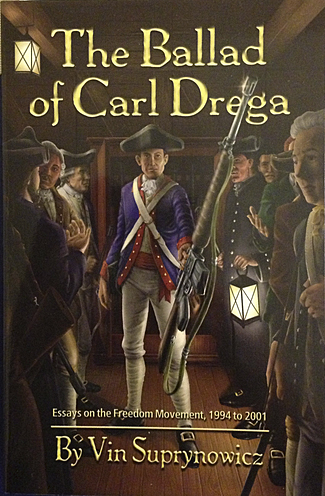 The Ballad of Carl Drega: Essays on the Freedom Movement 1994 to 2001 by Vin Suprynowicz. Reviewed by Miguel A. Faria, Jr., MD

The Ballad of Carl Drega by journalist Vin Suprynowicz is an eye-opening book that libertarians and informed conservatives will cheer. His uncompromising stance and indefatigable pursuit of freedom is sure to inflame the minds of those who worship omnipotent government.

Yet despite his passion and stridency, of which he is proud, Suprynowicz wants to ignite the spark of freedom in his readers’ hearts, not trap them in polemic argument.

The book’s succinct introduction sets the tone for the rest, containing a brief but masterful discussion of the true meaning of political compromise, based on Ayn Rand’s 1962 essay, “Doesn’t Life Require Compromise?” Our 21st-century politicians who sacrifice liberty on the altars of expediency and political correctness should study this.

The powerful section, “Live Free or Die: How Many More Carl Dregas?” is a shocking revelation of how we are losing our freedom and marching in step toward a virtual police state. People who have finally stood up for their freedom and property rights have been crushed with hardly a whimper of public protest. Why? Because the lapdog mainstream media have been complicit with government in keeping the public in the dark.

Carl Drega was an older man living in rural New Hampshire. Environmental officials repeatedly harassed him for violation of an arbitrary edict, with which he could not afford to comply. One day he was stopped on the road because he had some rusty equipment in his pickup truck. Pushed over the edge by meddling officials, Drega lost control. He pulled a gun, shot the patrolman, and went on a rampage, shooting several of his former bureaucratic tormentors before being killed in a battle with police.

Suprynowicz follows up Drega’s case with those of Gary Watson, Donald Scott, David Aguilar, Ralph Garrison, and others. Unlike Waco and Ruby Ridge, none of these cases is well known. In fact, as Suprynowicz writes, “The real significance, I believe, lies in the fact you’ve never heard of them. Or, if you have, that no magazine writer, no TV reporter, no documentary filmmaker has ever before juxtaposed all these deaths at the hands of the regulatory state.”

Suprynowicz explains: “In little more than 30 years, we have gone from a nation where the quiet enjoyment of one’s private property was a sacred right, to a day when the so-called property owner faces a hovering hoard of taxmen and regulators threatening to lien, foreclose, and go to auction at the first sign of private defiance of their collective will.”

He backs this up by citing cases such as that of Carol Pappas in which, to exploit a small but defiant property owner, the state acted in collusion with giant private interests, applying unjust laws and forming a corrupt “relationship between government and private property rights that my dictionary defines as fascism.”

The government realizes that an armed citizenry in this country at some point will reach its limit and become an explosive obstacle to further erosion of private property rights. Suprynowicz writes:

“This is why the tyrants are moving so quickly to take away our guns. Because they know in their hearts that if they continue the way they’ve been going—boxing Americans into smaller and smaller corners, leaving us no freedom to decide how to raise and school and discipline our kids, no freedom to purchase or do without the medical care we want on the open market, no freedom to withdraw $2,500 from our own bank accounts, let alone move it out of the country, without federal permission, no freedom even to arrange the dirt and trees on our own property to please ourselves—if they keep going down this road, there are going to be a lot more Carl Dregas, hundreds of them, thousands of them, fed up and not taking it any more.”

This is an explosive book that every American who values freedom must read and thoroughly digest if we are to use Suprynowicz’s “libertarian candle” to light the path for restoration of our freedom, and to guide us back to the vision of our Founders.

Miguel A. Faria, Jr., M.D. is a former professor of neurosurgery (ret.) and adjunct professor of medical history (ret.) at Mercer University School of Medicine, editor emeritus of the Medical Sentinel, author of Vandals at the Gates of Medicine (1995), Medical Warrior: Fighting Corporate Socialized Medicine (1997), and Cuba in Revolution: Escape From a Lost Paradise (2002).

Originally published in the Journal of American Physicians and Surgeons 2003;8(2):63.

This article may be cited as: Faria MA. The Ballad of Carl Drega: Essays on the Freedom Movement 1994 to 2001 by Vin Suprynowicz. Reviewed by Miguel A. Faria, Jr., MD. Journal of American Physicians and Surgeons 2003;8(2):63. Available from: https://haciendapublishing.com/the-ballad-of-carl-drega-essays-on-the-freedom-movement-1994-to-2001-by-vin-suprynowicz-reviewed-by-miguel-a-faria-jr–md/.