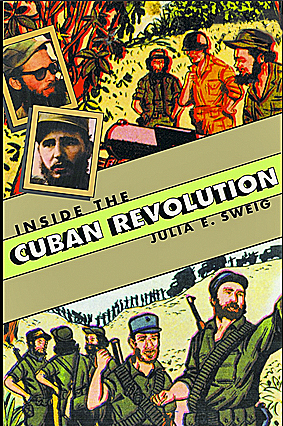 Inside the Cuban Revolution — A Book Review

Inside the Cuban Revolution by Julia E. Sweig, senior fellow and deputy director of the Latin American program at the Council on Foreign Relations (CFR), is a greatly disappointing book.

For one thing, the book is too narrow in scope and breadth as well as in covering the period under study. Although the book claims to study the period between November 1956 and January 1959, the author and publisher would have been more forthcoming about the content of this book if they had titled this tome more appropriately “Inside the 26th of July Movement Underground, April 1957 to July 1958.”

Very little detail is actually given about the period from February to April 1957 and August 1958 to January 1959, although these are crucial periods in the Revolution and the insurrection against Batista.

In fact, two of the most important events of the entire Revolution ­ and this brings us to the most serious flaw in the entire book ­ are almost completely neglected by the author, like informational black holes: the contribution of the 13th of March movement of the Revolutionary Directorate (RD) to the insurgency against Cuban dictator Fulgencio Batista and the attack on the Presidential Palace in Havana.

Thus, unfortunately, Ms. Sweig fails “to reveal the true relationship between Castro and the underground,” as she claims on the book jacket and in the body of her book.

The 13th of March RD movement was, arguably, the most effective underground organization during the entire insurrectional period. It was this revolutionary group, in fact, to which my parents belonged and which carried out some of the most audacious acts of the Revolution. This was the aforementioned attack on the Presidential Palace on March 13, 1957, to strike at the government from the top, the execution of Fulgencio Batista.

The attempt, heroic as it was, carried out in the middle of the day, in the very seat of government in the capital of Havana, failed. Over 40 assailants died in the attack, most of the RD leadership, including Jose Antonio Echeverria, the popular and charismatic RD student leader. One of the few survivors was Faure Chomón, secretary general and military chief of the RD, who was sheltered in our home from Batista’s esbirros (political police) after the notorious event.

The 13th of March RD movement, which the author and the communist Cuba archives ignored ­ reminiscent of the censorship in the old Soviet, Stalinist dictatorship ­ seemed to have been expunged from the history books, as if it never existed. It began as a student group in Havana but rapidly grew among the intellectuals, other professionals and civic groups, as well as the workers in the towns and cities, providing members for the urban underground and the campesinos (peasants) guerrilla fighters in the rural areas of the Escambray Mountains in Las Villas province in the very center of the island.

The 13th of March movement also spearheaded the final military attack on the provincial capital of Santa Clara that decided and ended with the triumph of the Revolution. The victors write the history, so Che Guevara of the 26th of July movement was given the credit for the victory at Santa Clara and, bolstered by the Cuban media like Bohemia and the U.S. press like The New York Times, Fidel Castro was extended full credit for the triumph of the entire Revolution.

Why this was so is beyond the scope of this review. For a better perspective, in English, I would recommend Mario Lazo’s book, Dagger in the Heart! (1968), Emory political science professor Juan del Aguila’s Dilemmas of a Revolution (1994; not even cited in this book), Hugh Thomas’ Cuba or the Pursuit of Freedom (1998) and, of course, my own book, Cuba in Revolution: Escape From a Lost Paradise (2002).

As a staffer at the CFR, Ms. Sweig was “granted unprecedented access to the classified records of Castro’s 26th of July movement’s underground operatives ­ the only scholar inside or outside of Cuba allowed access to the complete collection in the Cuban Council of State’s Office of Historic Affairs.”

Why this obsequiousness on the part of the Cuban government toward Ms. Sweig? After all, Robert Quirk, who has written the most authoritative biography of Fidel Castro, was not allowed access or even to meet or interview the Maximum Leader after years of trying to do so. Perhaps this is because the CFR that sponsored this work is an organization that has lionized, feted and glorified Fidel Castro for most of his 43 years in power. She could have done better!

And yet the author should receive some credit. Aside from the book’s misleading title and aforementioned shortcomings, Ms. Sweig has produced a fairly objective but narrow study, as suggested by my alternative title.

Moreover, she acknowledges that “this account does not represent an in-depth examination of all the factors that contributed to the regime’s [Batista’s] collapse, such as DRE [the 13th of March RD, which she never refers to as such but as the ‘student’ DRE], or even the military battles during the insurgency [which were few, mostly skirmishes with a demoralized, poorly trained, and poorly led Batista army, except for the decisive and final battle of Santa Clara].”

Note that I write “fairly objective.” Although she does cite two of the aforementioned book references, the “lion’s share” of her sources, including her interviews, came from the Who’s Who in the Cuban Communist Party. She gives credit to nearly 100 persons, including a number of left-wing academicians, assorted CFR dignitaries, and Fidel Castro’s greatest apologists: Wayne Smith, former head of the U.S. Interest Section in Havana, and Saul Landau, former head of the radical group Student Fair Play for Cuba Committee, to which Lee Harvey Oswald belonged.

Among the people Ms. Sweig interviewed was the (now deceased but still) infamous Comandante Manuel Piñeiro, Barbaroja (“Red Beard”), a war criminal who, along with Castro’s brother Raúl Castro, was indicted in 1989 in a federal court in Miami for drug trafficking.

Moreover, the author does succeed in making her case that during a very narrow period of time, between December 1956 and April 1958, Fidel Castro — holed up in the Sierra Maestra and not quite yet master of his own destiny —­ was forced to share in the decision-making and power with the 26th of July movement underground operatives, Frank País, René Ramos Latour, Armando Hart and Faustino Pérez.

Like Saturn, the Cuban Revolution devoured its children. País and Latour, who were strong-minded, independent, non-communist leaders, potential challengers to the future communist dictator, died under mysterious circumstances, as described by Quirk, myself and others. The deaths of these comrades implicated Fidel Castro (País and Latour) and two of his closest associates, his brother Raúl and his wife, Vilma Espín (País).

The other two operatives (Hart and Pérez), who were more pragmatic and attuned to the wishes of the Maximum Leader, survived the Revolution and became sources for the author of this book.

Of how much interest this dissertational tome will be to the average reader or even to the history scholar is questionable. Power-sharing between Fidel Castro and the 26th of July urban underground leaders ended with the Mompié meeting on May 3, 1958, in the wake of the fiasco of the general strike called for by its urban organizers.

From then on, it was only Fidel Castro, the Maximum Leader, with dictatorial powers over the movement and, subsequently, the Revolution. The full power of the autocracy would only become apparent after 1959, when Fidel Castro was secure and in absolute control of the reins of power.

This article may be cited as: Faria MA. Inside the Cuban Revolution — A Book Review. NewsMax.com, May 17, 2003. Available from: https://haciendapublishing.com/inside-the-cuban-revolution–a-book-review/.