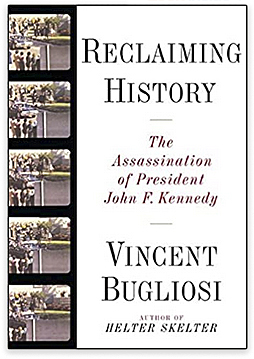 If Gerald Posner’s book, Case Closed: Lee Harvey Oswald and the Assassination of JFK (1993), convinced me that Lee Harvey Oswald killed JFK and acted alone, Reclaiming History: The Assassination of President John F. Kennedy by Vincent Bugliosi (2007) removed any possible lingering doubts that I may have had, even subconsciously. Take for instance, the troubling Silvia Odio incident that was not satisfactorily explained in Posner’s book, Bugliosi analyzes it carefully, as he did with all contentious “anomalies” in the JFK assassination, and formulates a more plausible alternative scenario than those propounded by conspiracy theorists.

Presumably three men, two Cuban-Americans and Lee Harvey Oswald (or someone who looked like Oswald), visited the Cuban exiled sisters, Sylvia and Annie Odio, at their home in Dallas on or about September 25, 1963, shortly before Oswald traveled to Mexico. Unlike Posner, Bugliosi believed Odio to be a credible witness and assumes the visit took place as she described. The Odio sisters’ father was an anti-communist rebel incarcerated in a Cuban prison since 1962 for anti-Castro activities. According to Sylvia Odio, Oswald (or the man who looked like him) was accompanied by two Cubans asking for assistance in anti-Castro activities. In fact, this is one of the incidents in which Bugliosi’s arguments changed my own explanation about what actually happened and interpretation of the incident. I had previously posited that the two Cubans were Castro agents instigating Oswald, who was very anxious to prove his pro-Castro activities in the U.S. to Cuban officials prior to his upcoming visit to the Cuban embassy in Mexico. These activities Oswald might have thought would help him establish his bonafides, obtain a Cuban visa, and be permitted to enter Cuba’s Workers Paradise, which he so much admired and glorified from the time he was in the Marines. I now believe from Bugliosi’s arguments that the two men were most likely anti-Castro, Cuban-Americans who Oswald had once again infiltrated, as agent provocateur, just as he had done in New Orleans. Although the two Cuban-Americans seemed to have mistrusted Oswald, the two activists might have thought they would be able to manipulate Oswald in anti-Castro activities.

Although Bugliosi tends to be needlessly argumentative with Posner on certain incidents and interpretations, the two writers agree on most everything about the JFK assassination, and ultimately reach similar conclusions. I recommend reading my review of Posner’s book, Case Closed: Lee Harvey Oswald and the Assassination of JFK, which is quite detailed. Because of the sheer size and scope of Bugliosi’s book, Posner’s smaller tome would probably be more likely to be read by ordinary Americans.

But Bugliosi goes far beyond Posner in uncovering evidence, supporting the Warren Commission’s findings (which so many conspiracy theorists criticize without having read the volumes containing them!), and specifically rebutting every notable conspiracy theory propounded in the last 40 years. Bugliosi also explains and unravels all troublesome aspects of the assassination that have been cited and used to generate those conspiracy theories. His book thus includes sections such as “Four Days in November” — almost a minute by minute account of the happenings and movements of every major character in the JFK assassination, including Oswald and Ruby from Friday, November 22, to Monday, November 26, 1963 (320 pages). Bugliosi also tackles allegations and explains situations including “the Magic Bullet,” the Single-Bullet theory, Oswald’s ownership, identification, and possession of the rifle found on the sixth floor of the Texas Book Depository (TBD), the sniper’s nest and evidence (e.g., finger prints, 3 bullet casings found there, etc.), Oswald’s famous photo with his Mannlicher-Carcano Italian rifle, the Grassy Knoll, other possible assassins, Jack Ruby, the conspiracies that did not happen, etc.

Reclaiming History, a monumental tome with over 1500 pages of text, plus Bibliography, Index, and another 1000 pages of Notes contained in a supplementary CD, remains to this day the best researched, most annotated, most scholarly, most analyzed, most comprehensive, and certainly most authoritative book on the JFK assassination, actually superseding Posner’s Case Closed. The book seemed to have made an impact on the American mind, although this observation remains largely unrecognized. But the fact is that after the celebrated movie JFK debuted in 1991, close to 80% of Americans believed there was a conspiracy and cover-up behind the JFK assassination. But by 2013, this number has been reduced to 61%, the lowest percentage since the 1970s. Nevertheless, this percentage remains disturbingly high considering the fact that several investigations have also revealed that Oswald had acted alone and no evidence of any conspiracy was uncovered during that decade — e.g., the Rockefeller Commission and the Church Committee of 1975 and the House Select Committee on Assassinations (HSCA; 1976-1978) — to the present day, and despite the release of all formerly classified material on the assassination.

But this should not be surprising; it could still take years to reverse the misinformation that has been disseminated by hundreds of JFK conspiracy books in the last 40 plus years, not to mention the serious psychical and historical damage that the totally deceptive and fictitious film by Oliver Stone, JFK (1991), has done in deceiving Americans about the concocted “facts” surrounding the assassination. No doubt Stone ran all the way to the bank exploiting the magic of cinema that so powerfully deceived and duped Americans (and the world) in propounding that there was a vast conspiracy involving large sectors of the U.S. government, including the FBI, the CIA, the Military-Industrial Complex, etc., and the supposedly equally behemothic cover-up by the Warren Commission and others, to keep Americans from knowing the “truth” of a conspiracy.

Bugliosi’s magnum opus, Reclaiming History, will in time go a long way to further reverse this inflicted historic damage on the psyche of Americans, the majority of whom still believe there was a conspiracy and that Oswald was just a “patsy.” Read this book. Despite its impressive size and the sheer weight of this very hefty tome, knowledge, logic, and eloquence carries the day in this suspenseful and tantalizing, yet easy to read, forensic book. And unless you are one of those conspiracy theorists who are immune to logic and reason, you will be convinced that Oswald was indeed the assassin, that he acted alone, and that there was no conspiracy. Get this book and read it, and you will also be convinced beyond all doubt! Kudos and 5 stars all around for this tour de force on the JFK assassination!

This article may be cited as: Faria MA. The assassination of John F. Kennedy and conspiracy theories — A review of Vincent Bugliosi’s book, Reclaiming History. HaciendaPublishing.com, November 8, 2015. Available from: https://haciendapublishing.com/the-assassination-of-john-f-kennedy-and-conspiracy-theories–a-review-of-vincent-bugliosis-book-reclaiming-history/