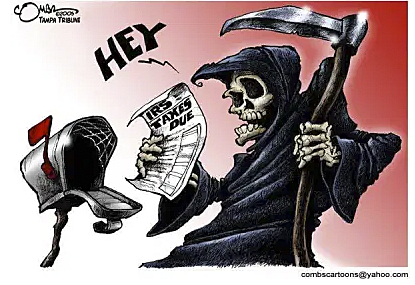 Inheritance and estate taxes (collectively referred to as the “death tax”) are the taxes one must pay to the government to be able to inherit property or money following the death of loved ones. With inheritance taxes, the beneficiary pays the tax before taking possession of the money or property. With the estate tax, the tax is levied on the decedent’s assets before the beneficiaries may receive their inheritance. Either way, the State (the government) takes its share: The bigger the legacy, the larger the government’s slice of the pie! Despite the alleged fairness, these inordinate taxes are government money-grabbing wealth redistribution schemes fueled by the politics of envy and promoted by progressive politicians usually of the Democratic persuasion. Inordinate estate tax rates are a measure of the level of socialism afflicting a given society. This is so because demagogic politicians pander to the dark side of human nature, eliciting envy to pander to the resentful, eyeing the money they can grab, seeing the votes they can buy, muscling the power they can exert over the masses, and enjoying the perks they can obtain for themselves. It is sold supposedly to the people as a “tax on the rich” that does not affect the middle class. And indeed because of the exemptions or exclusion amounts allowed upon which no tax is levied, estate taxes are presently relatively generous, and only 2% of Americans pay any federal death taxes after their demise.

In 2001, the exclusion amount was $675,000 and the Maximum Tax Rate (MTR) was 55%. By the end of George W. Bush’s term in 2008, the exemption was $2 million, and the MTR, thankfully, had been reduced to 45%.  Still the rich pay the lion’s share of these taxes, and the middle class is largely shielded by the exemption (or exclusion). During and despite the Barack Obama administration, Congress gradually increased the exclusion amount in 2016 to $5.45 million with a MTR capped at 40%. Yet, despite this seemingly generous exclusion, the amount of death taxation is still too high for a country that cherishes individual initiative, economic freedom, and limited government. This is particularly true for family-run businesses that are passed on and require further capitalization after the death of the owner such as for updating equipment, keeping up with technological advances, not to mention abiding by government mandates and regulations!

But there is more: The exclusion amount for gifts bequeathed to friends, not immediate members of the family, is limited to $14,000. This means that those whose friendship we cherished in our lives and those who provided services we wished to reward after death are burdened with exorbitant taxation ranging from 20% to 40%, beyond the exempted $14,000. Therefore, this type of “inheritance” tax is not paid solely by the “rich,” as claimed, but by ordinary Americans — all of us — receiving gifts from benefactors. The truth then is that high death taxes (whether from estate, gift, or inheritance) hurt us all, including the little people the Democrats claim to represent. Among the so-called rich, beyond the $5.45 million exemption, the financial imposition of estate taxes may cause small businesses to falter, farms to be taken away, homes to be foreclosed, and even valuable heirlooms and all types of inherited properties lost because of the exorbitant federal expropriations promoted by money-grabbing, redistributive, socialist politicians, who persist in calling themselves Democrats, when in fact socialist is a more accurate description.

In this regard, the presidential campaign of a self-avowed socialist, Senator Bernie Sanders (I-VT), has been honestly edifying, illuminating the degree of socialism, envy, and class warfare that has presently enveloped our society and been accepted by less-than-informed Americans. Senator Sanders has in fact called for graduated taxation of up to a 65% death tax rate, figuratively and almost literally, taxing billionaires to their grave! If Sanders proposals were to be enacted, it would take us a couple of steps closer in one fell swoop towards Karl Marx’s socialist ideals outlined in his Communist Manifesto: heavy progressive taxation and erosion of the rights of inheritance!

We have confined ourselves to the federal government, but the state governments have additionally begun to use the Marxsist formula for expropriating wealth from the deceased, and depending on the state where one lives, the death tax is frequently more prohibitive than at the federal level because the exclusion amounts permitted by the states are much lower.

The liberal media and “progressive” popular culture has succeeded in creating an atmosphere in which a large section of Americans envy the wealth of others, rather than living the dream of setting achievable financial goals for themselves and by sheer hard work making them happen. There is the misperception that wealthy Americans owe their wealth to old money and inheritance; this is myth promulgated by the envious and resentful. The fact is that according to every study conducted since the 1980s, including those by BMO Private Bank (2013), Financial Advisors (2014), and Forbes (2015), 70% of American millionaires and billionaires markedly increased their wealth by their own initiative or are completely self-made. In our American social and economic highly mobile society, less than 10% percent of the “rich” inherited their wealth. Most American millionaires and billionaires, exemplified by Bill Gates, Oprah Winfrey, Rupert Murdoch, Mark Zuckerberg and others, are self-made men and women, who through diligence, hard work, entrepreneurship, innovation, and ingenuity created their own wealth and financial empires. This economic freedom that allows us to keep the wealth of the fruit of our labors, use it as capital (capitalism) for further investment, use it as we see fit in pleasure, and even pass it on as bequeathment to our family or friends, is what made this country what it is today — the wealthiest and freest country on Earth!

2. The Estate Tax in the United States. Available from: https://en.wikipedia.org/wiki/Estate_tax_in_the_United_States

3. There Are More Self-Made Billionaires In The Forbes 400 Than Ever Before. Forbes. October 13, 2014. Available from: http://www.forbes.com/sites/afontevecchia/2014/10/03/there-are-more-self-made-billionaires-in-the-forbes-400-than-ever-before.

This article may be cited as: Faria MA. Death Taxes — Heavy progressive taxation and the erosion of rights of inheritance. HaciendaPublishing.com, November 19, 2015. Available from: https://haciendapublishing.com/death-taxes–heavy-progressive-taxation-and-the-erosion-of-rights-of-inheritance.