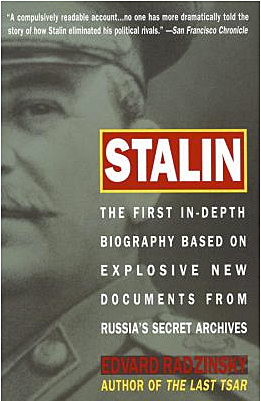 Stalin: The First In-depth Biography Based on Explosive New Documents from Russia’s Secret Archives by Edvard Radzinsky is an authoritative, engaging, thrilling, and edifying biography of the Red Czar of the Soviet Union, the tyrant Joseph Stalin. This book was published in Russia in 1996, and immediately translated and published in an English edition that same year, only five years after the Russian bear had stumbled with fatal results for the USSR and its communist satellites. Without Stalin’s legacy of coercion, persecution, and force, the communist world could not survive of its own merit or the free choice of the people over whom it ruled.

There is factual objectivity in this biography, and yet there are not penumbras over right and wrong and the evil nature of Soviet communism. The suspenseful facts speak for themselves, and we end up with a cliffhanger biography and history that will not be surpassed for years to come.

Edvard Radzinsky’s in-depth biography of Stalin is a labor of love after years of painstaking research in Russia’s secret archives. The tome is written in electrifying prose and beautiful narration. And here we must also pause and praise H. T. Willetts, for his/her marvelous literary English translation.

In his poignant Preface, setting the tone for his book, the author writes: “[Following the death of Stalin in March 1953]… I see myself in the crowd of mourners. How lonely I felt among all those grief-crazed people. Because I myself hated him.” His father a journalist of well-to-do Jewish descent supported but rapidly became disenchanted with the Bolshevik Revolution and Stalinism. He told his son,  “perhaps one day you will write about him.” And Mr. Radzinsky, penning the most exciting, well documented, and most authoritative biography to date — published this tour de force biography of Stalin!

There is no ambivalence about the perversity; there is no confusion about what it might have been. Stalin was a monster, but communism was an evil and disastrous philosophy for Russia, whether it was in the hands of Lenin, Stalin, or “the collective leadership” that followed. It was only a matter of degrees.  So Radzinsky squarely agrees with Aleksandr Solzhenitsyn and Boris Yeltsin, who said in 1991: “Our country has not been lucky…. It was decided to carry out this Marxist experiment on us… It has simply pushed us off the path the world’s civilized countries have taken…. In the end, we proved that there is no place for this idea.”

After Lenin seized power, elections were held, but as the Bolsheviks received less than a quarter of the votes in the Assembly, they quickly dispersed the Assembly by force on January 18, 1918, the first and only “democratic” session did not get to write a constitution or engage in any sort of pluralism. Kadets, Mensheviks, even Left Social Revolutionaries  (who were briefly allies of and who differed little in ideology or zealot from the Bolsheviks) were soon hunted down by the Cheka (i.e., Lenin’s secret police, precursor to Stalin’s NKVD, and Khrushchev’s and Brezhnev’s KGB).

The terror was intensified but not created by Stalin. That dubious distinction goes to Lenin. Stalin honed terror to a fine art and used it to bleed the former Bolsheviks to death in his ghastly purges, using the NKVD to hunt enemies, real or imagined. Millions of much lesser known peasants and workers, “enemies of the people,” were also dying in state-controlled famines, shootings, and in the Gulag Archipelago!

Radzinsky’s engaging narrative takes us through the political purges, the meat grinding of Russian society, and the elimination of Stalin’s real or imagined opponents: the “Right deviationists” headed by Bukharin (Lenin’s “favorite of the Party”) and the military exemplified by Marshall Tukhachevsky; the Left internationalists led by Trotsky and Troskyites; and the dynamic, old Bolshevik duo, Kamenev and Zinoviev. Even Stalin’s secret police, the NKVD was not immune and a large number of those who executed in his name, such as G. Yagoda, N. Yezhov, and V. Abakumov, were themselves executed as the meat grinder of the communist terror continued. In this part of the narration, Edvard Radzinsky’s tale is similar to Dmitri Volkogonov’s: both elicit in colorful and sanguinary detail the nature of the terror beast.

And the reader cannot help but be reminded of the similar happenings that took place in France a little over a century earlier. In the French Revolution Maximilien Robespierre destroyed his royalist enemies first, next the brave Girondins led by Madame Roland, Brissot, Vergniaud and their followers on the right; then the vicious troublemakers of the left, including the cowardly radical “enrages,” Rene Hebert (Le Pere Duchesne) and Pierre Gaspard Chaumette; and finally the moderate  “indulgents,” who eventually included Camille Desmoulins and Georges Danton, the titan of the Revolution himself.

Stalin’s sanguinary State Prosecutor, the odious Andrey Vyshinsky, tormenting and haranguing “enemies of the people,” also comes to life. The kangaroo and secret trials of the great purges resembling in cynicism and wickedness the shenanigans of Fouquier-Tinville, the Prosecutor for the Revolutionary Tribunals during the French Revolution, acting under orders from Robespierre, just as Vyshinsky acted under orders from Stalin, administering grotesque impersonations of justice, preordained executions and the perpetuation of terror.

But the reign of terror of Robespierre lasted less than two years; Stalin’s terror lasted decades, fluctuating in intensity as he saw fit during the entire period of his dictatorship from approximately 1927 until the very day of his death, March 5, 1953! And his legacy of totalitarian communism lived on until 1991!

This magnificent and absorbing tome is the best written biography in the past 5 years, simply, a “must-read” for both the initiate student, as well as the savvy scholar of Soviet history, Stalinism, and the life of Joseph Stalin. Radzinsky’s biography reads like a thriller novel — but it is all true and well documented! The last chapters on Stalin’s death and his plans for the future — i.e., political and military plans that he was not able to carry out because of his timely, mysterious demise — are worth the price of the whole book alone!  Thumbs up and the highest recommendation for this tour de force biography!

This article may be cited as: Faria MA. Stalin: The First In-depth Biography Based on Explosive New Documents from Russia’s Secret Archives by Edvard Radzinsky. HaciendaPublishing.com, July 13, 2011. Available from: https://haciendapublishing.com/stalin-the-first-in-depth-biography-based-on-explosive-new-documents-from-russias-secret-archives-by-edvard-radzinsky/.