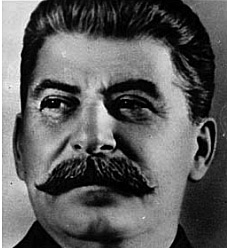 Stalin and the Atomic Bomb

And yet, Stalin and Beria estimated that the number of atomic bombs possessed by the United States was much lower based on the intelligence provided by the atomic spies, including the physicists Klaus Fuchs (photo, left) and Theodore Hall.

“…Fuchs revealed that American production was one hundred kilograms of U-235 a month and twenty kilos of plutonium per month. From this information Soviet intelligence could calculate the number of atomic bombs possessed by the Americans..

“Thus, we [Soviet Intelligence] were able to determine that the United States was not prepared for a nuclear war with the Soviet Union at the end of the 1940s or even in the early 1950s.

“[Truman]…and Clement Attlee, the British prime minister, were prepared to use nuclear weapons to prevent Berlin’s fall to communism, but the Soviet Union knew that the Americans did not have enough nuclear weapons to deal with both Berlin and China. The American government overestimated our threat in Berlin and lost the opportunity to use the nuclear threat to support the Chinese Nationalists.

“Stalin pursued a tough policy of confrontation against the United States when the Cold War started; he knew he did not have to be afraid of the American nuclear threat, at least until the end of the 1940s. Only by 1955 did we estimate the stockpile of American and British nuclear weapons to be sufficient to destroy the USSR.

“Stalin provoked the Berlin crisis deliberately to divert attention from the crucial struggle for power in China.” (2)

The Russians believed either that our 7 bombs could not be assembled rapidly enough to make a difference or that we really did not have enough uranium and plutonium for two or three simultaneous theaters of operation. This information emboldened Stalin and Beria. It is frightening to realize that just about the time of his death, Stalin was close to unleashing another holocaust with the concocted plot against the Jewish doctors and possibly World War III. (3)

The Russians had seriously underestimated U.S. nuclear capabilities in the late 1940s and early 1950s, despite their well-placed nuclear spies. After the nuclear explosions of Hiroshima and Nagasaki of 1945, the reality was the U.S. was not willing to again use atomic weapons to roll back or even contain communism, except in the case of overwhelming Soviet aggression against the U.S. and her allies in Europe.

Nuclear stockpile information or misinformation helped to assure a communist victory in China in the civil war of 1947-1948, and Mao Zedong with emboldened Soviet assistance prevailed over the Nationalist Chiang Kai-Shek. The Soviets believed we did not have enough atomic bombs to confront them in Eastern and Central Europe, Berlin, and China — all at the same time but, in fact, we did!

The U.S. could have used the bomb in China during the Chiang Kai-Shek versus Mao Zedong civil war and even during the Korean War, and have plenty nuclear weapons to spare! But we were not like the Soviets. We used the atomic bomb only, when in the estimation of the experts, we could save the lives of at least one million American soldiers and Japanese military and civilians in 1945.

Because the Soviets believed that we would be trigger happy to use atomic weapons, it was their fear of us using them that posed a deterrent to Stalin in 1946-1953, as it did during the Khrushchev (1954-1964) and Brezhnev years (1964-1982) — until the advent of the Ronald Reagan presidency and Reagan’s build up of our intelligence assets and military capabilities. Nevertheless, only a cold, nuclear deterrent prevented the powerful Red Army from overrunning the pussyfooting (and frequently obsequious) Europeans, and protected the free world until the Berlin Wall came tumbling down and the evil empire disintegrated from within.

For our part, the U.S. did not find out about the nuclear weapons gap in our favor until one of the real heroes of the cold war, Soviet Colonel Oleg Penkovsky (photo, left), revealed the family jewels of Soviet ordnance and rocketry (1961), and the methodology of nuclear construction by which our CIA deciphered the U2 photos during the Cuban Missile Crisis in October 1962. (4)

Soviet Premier Nikita Khrushchev knew that the U.S. had the upper hand in nuclear weapons, a gap that Leonid Brezhnev, despite detente, later tried to correct with bankrupting consequences for the USSR. With Penkovsky’s revelations, Khrushchev was now also aware that the U.S. knew the gap was on our favor. The Missile Crisis was defused when Khrushchev agreed to remove the missiles from Cuba. It was at the very least a political and public relations defeat for Khrushchev and the Soviet Union, although in reality the U.S. also agreed to remove rockets from Turkey and President Kennedy pledged that the U.S. would not invade Cuba, virtually assuring that communism would remain entrenched in the imprisoned island to this day.

1) Dr. Faria: “Could your source be wrong about this figure of 7 atomic bombs at that very critical time (1946) in history? Does this include uranium and plutonium fission material? And what would it have taken for the nuclear physicists to assemble those bombs, time wise?”

Mr. Farquhar replied (7-19-11): “I don’t see how many sources could all be wrong about the 1946 stockpile. The Federation of American Scientists, Bulletin of Atomic Scientists, and most recently, Jerry Miller in Stockpile: The Story Behind 10,000 Strategic Nuclear Weapons, all cite the same general figures in addition to other books, including Pulitzer Prize winner Richard Rhodes The Making of the Atomic Bomb: Seven to 9 bombs of the Fat Man implosion type. There were only seven ‘Urchin’ neutron initiators made from beryllium and polonium-210 which had limited half-lives. Two bombs were used at Crossroads in July 1946, a very provocative action to the Soviets, leaving the stockpile slightly smaller. Even Truman at the time had no idea how many bombs existed. By June 1947, there were 13 nuclear cores and 29 casings, 1951 showed 300. The Little Boy uranium fueled bomb was never mass-produced because of its inherent danger, the amount of fissile material needed (75kg of U-235), and its inefficiency, burning less than 1% of the uranium before tearing itself apart. These are the stockpile figures for all years.” http://bos.sagepub.com/content…

2) The section in quotes comes from Pavel Sudoplatov and Anatoli Sudoplatov, Special Tasks: The Memoirs of an Unwanted Witness — A Soviet Spymaster with Jerrold L. and Leona P. Schecter, Little Brown and Co., London, 1994, pp. 210-211

4) The Spy Who Saved the World: How a Soviet Colonel Changed the Course of the Cold War. by Jerrod L. Schecter and Peter S. Deriabin, Charles Scribner’s Sons, New York, 1992.