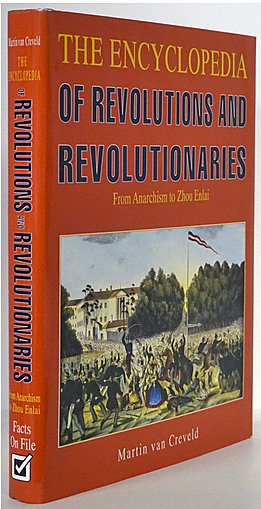 The Encyclopedia of Revolutions and Revolutionaries: From Anarchism to Zhou Enlai by Martin van Creveld

The Encyclopedia of Revolutions and Revolutionaries: From Anarchism to Zhou Enlai by Martin van Creveld, Editor-in-Chief, is an essential reference book for those interested in researching the history of revolutions and revolutionaries. The main drawback is the liberal, left-of-center academic bias that one has come to expect in most of these types of books. And this occurs in most (but not all) of the entries, probably reflecting the views of the various authors. There are also a few mistakes in dates and facts that may be distracting to scholars and serious researchers.

The entry on Ernesto (Che) Guevara is a case in point. Guevara is lionized to the degree that his entry becomes a virtual hagiography of the fallen, flawed and communist revolutionary. For example, Guevara did very little work as a physician contrary to what the authors lead you to believe. The entry also contains a factual error that “Batista sent a train load of troops to recapture Oriente Province. In a pitch two-hour battle, Guevara captured the train.” In fact, the province and battle took place in Santa Clara in the center of Cuba, not in Oriente Province at the eastern end of the island.

The entries on the French Revolution and the Convention are also very tilted toward sympathy for the radical Jacobins. Consider the praise that the authors heap upon the Jacobins:

“The Jacobin leaders, ruling by means of the Jacobin Club in Paris which met daily on the Rue Saint Honoré and the Convention’s Committee of Public Safety sitting in the Tuileries, controlled the two organs of power. They gave France the most effective democratic government it has ever known, enabling it to wage all-out war against most of Europe while at the same time succeeding in crushing the Catholic and Royalist Vendee as well as the federé revolt which the Girondins had been able to keep alive in two-thirds of the French provinces.”

Suffice to say, that if this whole statement were true, then it would be an indictment of democracy and self-determination. And, it equates France’s “most effective democratic government” with dictatorship, militarism, and an utterly repressive regime — not to mention the Reign of Terror by which it ruled!

Yet, Chiang Kai-Shek is treated very fairly, which was pleasantly surprising for a man who moved from Left to Right in the political spectrum. Surprising too was the description of the Indonesia Coup of 1965. Despite excellent coverage of this momentous revolution, we find that although President Sukarno has a separate entry later in the book, General Suharto does not!

As to the good points, let’s reiterate that it’s a very comprehensive tome that includes a number of entries, obscure Chinese as well as Arab and Middle Eastern revolutionaries galore. You feel as if no revolutionary has been left out, particularly of the socialist persuasion. No one, from ancient to modern times, seems to have been forgotten. The reader will be delighted to find that anarchists are also well covered. One is also delighted to find this gem, an obscure but instructive entry on the Argos Revolution:

“In 370 B.C., civil strife (stasis) broke out in Argos, which had a democratic regime. The masses were instigated by a number of demagogues against the very rich citizens….Thirty of the most distinguished citizens were put to death and their property was confiscated. The demagogues kept on inciting the mob, which condemned to death more than 12,000 rich men, who were then beaten to death. When the demagogues wished to stop the accusations against the well-to-do, the masses turned against them as well and all of them were put to death….”

In short, the book is recommended as a useful reference for history scholars as well as reading fans of revolutions and revolutionaries, with the caveat that much of the text is written by scholars, who have slight to moderate bias toward liberal politics and socialism and view these events through the special rose-colored glasses to which they have become accustomed in their academic environments.

This article may be cited as: Faria MA. The Encyclopedia of Revolutions and Revolutionaries: From Anarchism to Zhou Enlai by Martin van Creveld. HaciendaPublishing.com, November 8, 2011. Available from: https://haciendapublishing.com/the-encyclopedia-of-revolutions-and-revolutionaries-from-anarchism-to-zhou-enlai-by-martin-van-creveld.

1 thought on “The Encyclopedia of Revolutions and Revolutionaries: From Anarchism to Zhou Enlai by Martin van Creveld”