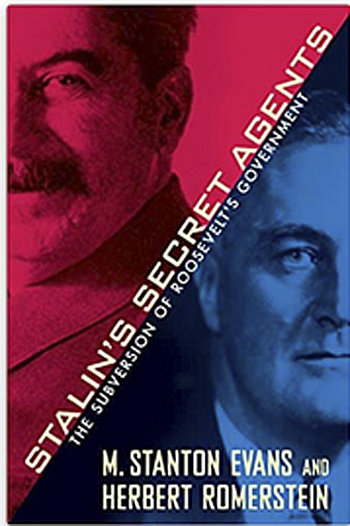 Stalin’s Secret Agents: The Subversion of Roosevelt’s Government was written by two experienced authors and recognized authorities on the Cold War, M. Stanton Evans and Herbert Romerstein. Evans is a veteran journalist and former broadcaster, as well as the author of Blacklisted by History (2009), a biography of Senator Joseph McCarthy, and other momentous books. Romerstein was the former head of the Office to Counter Soviet Disinformation at the U.S. Information Agency and a congressional staffer of the House Intelligence Committee. These two men have collaborated in writing a magnificent and shocking exposé that has been crying out for exposure — to inform as well as to correct and augment the incomplete and distorted historic record, not to mention reveal the true moral standing of a number of Americans who betrayed the nation for a perverted and venal ideology based on lies.

The importance of this book is that it not only exposes the penetration of the U.S. government by full-fledged Soviet spies but also documents the subversion by communist “agents of influence” subservient to Stalin and the USSR high up in the FDR administration. This is a inimical tale of repeated betrayals that needed to be told well, and the authors of this book have done a magnificent job in telling it, writing in an enthralling narrative with crisp and succinct prose. Evans and Romerstein document how these “agents of influence,” which the West always considered innocent “idealists” (although not so by the KGB, which knew them for what they were, valuable Soviet agents), did as much if not more damage than full-fledged foreign spies by overtly or covertly influencing government policy from the highest levels in the U.S. government. In the case of FDR, they were, as the book documents, operating under the aegis of the President himself. Indeed, FDR had surrounded himself and suffused the executive branch of government with communists, Soviet agents, and “fellow travelers,” who did untold damage to the nation and the world.

Perhaps foremost among these Soviet agents was presidential aide and FDR’s friend and alter ego, Harry Hopkins, who given the enormity of his influence and power has been glossed over as a Soviet agent and only reluctantly described heretofore as an “unconscious agent.”(1,2) Ideological and moral excuses have been concocted for Hopkins to be described as an “unconscious agent [of Soviet influence],” so as not to tarnish the image of FDR, a four time, popular American president, who presided over World War II and the early signs of recovery from the Great Depression.

The book delves in detailed cataloging also the treasonous activities of Assistant Secretary of the Treasury, Harry Dexter White; Executive Assistant to the President, Lauchlin Currie; influential member of the Institute for Pacific Relations (IPR), Owen Lattimore; Treasury official, Solomon Adler; State Department official, Alger Hiss; Duncan Lee, a Soviet spy in the Office of Strategic Services OSS (the precursor to the CIA during the War, which became riddled with communists and severely penetrated); and many others who did the bidding on behalf of Stalin and the Kremlin at the expense of their own country. For the most part, these “agents of influence” were not publicly exposed or punished for their betrayal — some fled the country while others remain at their posts for years. Yet the mounting evidence of their treason has not been properly archived or published in history textbooks, resulting in incomplete, distorted, and perverted history.

It should be noted that the shocking revelations documented by Evans and Romerstein are consistent with the intelligence provided by Soviet defectors; disclosed in the Vassiliev papers and the Mitrokhin Archives; substantiated by the decrypted Venona transcripts; and much of it corroborated by citations in congressional committees. Among the revelations in Stalin’s Secret Agents I found most interesting were the following:

1) How Japan, deficient and desperately in need of raw materials and oil, resources crucial to its survival, was deliberately blocked access to them by the FDR administration “war hawks,” among them Harry Dexter White. In 1941, deprived of oil and vital resources, Japan was forced to go to war and manipulated to attack not the Soviet Union but the U.S., preventing the USSR from being attacked and crushed on two fronts. Instead, the Imperial Empire of Japan massed and marched its armies southward into Southeast Asia and its air force against the U.S. and Pearl Harbor, sparing the Soviet Union and propelling America into war against the Axis Powers.(3)

2) How some of these agents of influence in the White House, State, and Treasury Departments in the FDR administration, including such notables as Harry Hopkins, Alger Hiss, Harry Dexter White and others, militated to successfully allow Stalin to seize and enslave parts of Central Europe and all of the people of Eastern Europe, among them Czechoslovakia and Poland, the very same countries for which France and England had gone to war against Nazi Germany, starting World War II. These same agents of influence, for extra measure, doomed efforts of anti-communist underground forces, not only in Poland but also in Yugoslavia, where anticommunist leader Draga Mihailovich was betrayed to the communists forces headed by Marshall Tito and shamefully executed.

3) How during World War II, the U.S policy toward Stalin and the USSR was dictated by Harry Hopkins, who reminiscent of the relationship of Woodrow Wilson and Colonel Mandell House during World War I, lived in the White House during 1941-1944, as if he were a member of the Roosevelt family. Harry Hopkins summed up the policy toward the Soviet Union as “Russia…must be given every assistance and every effort must be made to obtain her friendship.”(4) This was seconded by FDR, “I think that if I give him [Stalin] everything I possibly can and ask for nothing from him in return, nobles oblige, he won’t try to annex anything and will work for world democracy and peace.”(5) To make himself more appealing to Stalin, FDR even began to distance himself from Winston Churchill, even making tasteless jokes at Churchill’s expense and making common cause with Joseph Stalin at every turn. Unfortunately, the fate of millions of people depended on this deadly, serious farce.

4) How Nationalist leader Chiang Kai-shek was deliberately calumniated, abandoned and betrayed, and how China was turned over to the communists and Mao Tse-tung by the agents of influence, particularly Owen Lattimore, Solomon Adler, Harry Dexter White, and the diplomat and fellow traveler, John Stewart Service. These men spread disinformation about alleged venal conditions in the Nationalist government, calumniated Chiang Kai-shek, and praised Mao Tse-tung. Information from defectors and the Venona files verify what Evans and Romerstein document, namely that a concerted campaign of disinformation was created and propagated by these agents of influence to tilt American opinion away from Chiang and the American government away from rendering the needed assistance to the Nationalists, while helping Mao seize control of China.

These are but four among many other interesting revelations that await the interested reader. I categorically recommend this fascinating book but warn those who deeply care about this nation that if they are hypertensive, Stalin’s Secret Agents may not be salubrious to their blood pressure. This book is essential reading and should be available in public libraries and institutions, as well as the personal library of historians of the Cold War, non-fiction espionage aficionados, and those who want to set the record straight about the FDR administration and the Cold War. I assign it 5 stars without reservation. Get this book and read it!

3. A full book, “Operation Snow: How a Soviet Mole in the FDR’s White House Triggered Pearl Harbor” (2012) by John Kosten, has been written about this very issue.

Miguel A. Faria, Jr., M.D. is a medical historian, and an Associate Editor in Chief and World Affairs Editor of Surgical Neurology International (SNI). He is the author of Cuba in Revolution: Escape From a Lost Paradise (2002), and numerous articles on political history, including “Stalin’s Mysterious Death” (2011); “Stalin, Communists and Fatal Statistics” (2011); “The Political Spectrum — From the Extreme Right and Anarchism to the Extreme Left and Communism” (2011); “Violence, mental illness, and the brain — A brief history of psychosurgery” (2013), all posted at his website HaciendaPublishing.com.

This article may be cited as: Faria MA. Roosevelt and Stalin — The Subversion of FDR’s Government by Communist Traitors and Fellow Travelers. HaciendaPublishing.com, February 3, 2014. Available from: https://haciendapublishing.com/roosevelt-and-stalin–the-subversion-of-fdrs-government-by-communist-traitors-and-fellow-travelers.

The photographs used to illustrate this book review for Hacienda Publishing came from a variety of sources and do not appear in Stalin’s Secret Agents.