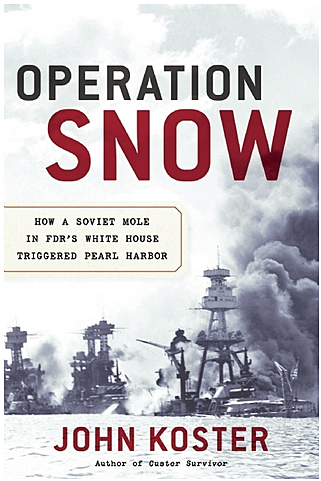 Operation Snow, Pearl Harbor, and the Moles in the FDR Administration

On the eve of World War II, the little known Battle of Khalkan Gol between the Soviet Union and the Imperial Empire of Japan was fought to a climax on August 20-31, 1939. Suffice to say the Japanese Army in Mongolia was decisively defeated by elite Siberian Soviet army units at Khalkan Gol and Lake Khasan led by Marshall Sergei Zhukov, later a Hero of the Soviet Union. This almost secret encounter involved a million soldiers and was kept quiet by both Russia and Japan. I have come to believe that more than likely this drubbing of the Japanese helped convince them to proceed with the Tanaka Plan or the Southern strategy for the conquest of the Far East and the Pacific, rather than the invasion of Siberia, where the Soviets still kept their best troops.

After this defeat in Mongolia and other concerns — among them, the needed vast supplies of oil and raw materials available in Southeast Asia, it stands to reason the Japanese Navy’s arguments for the Southern naval strategy had prevailed over the Army’s Northern Siberian military strategy. This explains why the Japanese chose to attack Pearl Harbor and invaded Southeast Asia, instead of attacking Siberia and the USSR, as Hitler and the German High Command urged them. Had the Japanese done this, they could have crushed the Russians between two fronts in 1941, avoiding the attack on Pearl Harbor, entrance of the U.S. into the war would have been delayed, or possibly, the U.S would have staid out of the conflict, increasing the chances of Axis Powers victory.

But the Japanese did attack Pearl Harbor. Now we know there were other factors, namely the Soviet spy and agent of influence, Assistant Secretary of the Treasury Harry Dexter White, who was doing the bidding for Stalin and the Soviets, a traitor in the FDR administration.. To protect the Soviet Union from attack and divert the Japanese attack against the U.S. Harry Dexter White pushed the Japanese into a corner: Japan, deficient and desperately needing raw materials and oil, resources crucial to its survival, was deliberately blocked access to them by the FDR administration “war hawks,” led by Harry Dexter White. In 1941 deprived of oil and vital resources, Japan was forced to go to war and manipulated to attack, not the Soviet Union but the U.S., preventing the USSR from being attacked and crushed on two fronts.

Operation Snow: How a Soviet Mole in FDR’s White House Triggered Pearl Harbor by John Koster is momentous and together with M. Stanton Evan’s and Herbert Romerstein’s book Stalin’s Secret Agents: The Subversion of Roosevelt’s Government fills a serious gap in historical knowledge that needed filling as to the events leading to World War II and the Cold War. This book is essential reading and should be available in public libraries and institutions, as well as the personal library of historians of the Cold War, non-fiction espionage aficionados, and those who want to set the record straight about the FDR administration and the Cold War. I assign it 5 stars without reservations. Get this book and read it!

Miguel A. Faria, M.D. is the author of Cuba in Revolution: Escape from a Lost Paradise (2002) and of numerous articles on political history and Soviet communism, including “Stalin’s Mysterious Death” (2011), “Stalin, Communists and Fatal Statistics” (2011), and “the Political Spectrum — From the Extreme Right and Anarchism to the Extreme Left and Communism” (2011); “America, guns and Freedom” (2012); “Violence, mental illness, and the brain — A brief history of psychosurgery” (2013), etc., all posted at his website HaciendaPublishing.com.

This article may be cited as: Faria MA. Operation Snow, Pearl Harbor, and the Moles in the FDR Administration. HaciendaPublishing.com, February 2, 2014. Available from: https://haciendapublishing.com/operation-snow-pearl-harbor-and-the-moles-in-the-fdr-administration.