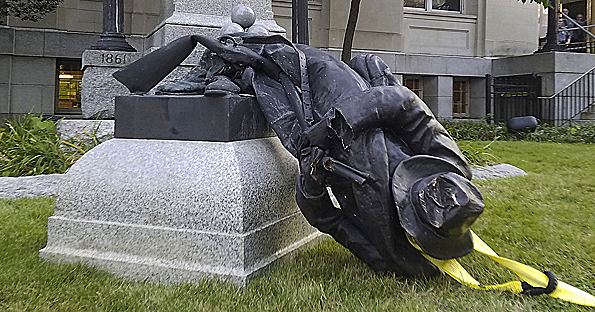 On August 14, 2017 radical protesters in Durham, N.C., torn down a Confederate monument that had been standing in front of the town Courthouse. According to UPI, “the statute was pulled down from its perch with a yellow nylon rope as protesters cheered. Once the monument crashed down to the ground, several people spit on and kicked it.”

The protesters were led by members of the Workers World Party (WWP), a communist party in the United States, a divergent group from the Socialist Workers Party (SWP) founded by radical Sam Marcy. In 1994, Marcy went to North Korea to express condolences on behalf of WWP on the death of dictator Kim Il-sung. This far-left group has sponsored demonstrations and espoused violence in the United States by supporting such violent groups as the Black Panthers and the Weather Underground, and openly still supports the communist government of North Korea in its threats against the United States. But neither this event in Durham, nor the nature of the protesters, was widely reported in the mainstream liberal media. Readers of GOPUSA.com were fortunate to have the UPI article in the News section, for at least some comparison with events in Charlottesville. In Durham, the protesters conducted their illegal protest unopposed, and the event was largely unreported.

According to the Charlotte News & Observer, in 2015, North Carolina passed a state law prohibiting the removal of any “object of remembrance” on public property that “commemorates an event, a person, or military service that is part of North Carolina’s history.” Transgressors can be charged with a misdemeanor and face a fine of $500 and 24 hours of community service. They are getting off lightly.

In Charlottesville, Virginia, there was wide media coverage. With the media sensationalization of the event, Unite the Right marchers were confronted and violence erupted. Trump was correct. There was violence on both sides. Virginia State Police Troopers Jay Cullen and Berke Bates were killed when their helicopter crashed while observing the protests in Charlottesville, and a white supremacist used the new weapon of mass killing, a car and drove it into the crowd killing a 32-year old paralegal and injuring 19 others.

In Charlottesville, it was widely reported even by the BBC — which when it comes to reporting on Trump and U.S. politics has become an international wing of the mainstream liberal media — that Unite the Right marchers were responsible for the mayhem, both sides punched and threw rocks at one another. True. Unite the Right marchers triggered the incident but the equally rabid Antifa (anti-fascist), Black Lives Matter, and the communist counter protesters went unnamed. Every participant in Unite the Right, on the right or on the “far right,” was named. Nor was it widely reported that many of those radicals, who participated in the violent counter protests in Charlottesville, went on to tear down the confederate monument in Durham.

Likewise, Virginia Governor Terry McAuliffe condemned only one side. Trump responded correctly blaming both sides, but because he did not follow the prescribed formula of political correctness, he was unfairly attacked by the self-righteous progressive cultural establishment of the Thought Police.

In New Orleans, Mayor Mitch Landrieu also took down four Confederate monuments this year. This may have been a distraction given the fact the city is afflicted with rampant violent crime (including murders), a situation made worse by Democratic politics in the city. Corruption is legendary and mismanagement is at an all time high. Yet, the city spent $2.1 million to remove the monuments. Confederate flags have been removed and calls for removal of more statutes have been made elsewhere — intolerant and repressive efforts to rewrite or reject American history. And after the statues are taking down and monuments desecrated, will book burning be next?

Given the expressed ignorance of events that came before their time, and neglecting what little they may remember of the lessons of history, the intolerant leftists are using the destructive and iconoclastic tactics of the mass murderers of communism, Islamic terrorists, and even the Nazis — the very National Socialists who they claim to hate — to express their mirror-image hatred. The Nazis burned books and destroyed what they considered degenerate arts and buildings.

One can only imagine these protesters, right-wing and left-wing, vying for power in the streets of a weaker nation without our tradition of the rule of law and our legacy of freedom. On one side, American brown shirts and Nazis fighting Maoist Red Guards and Stalinist communists on the other.

A recent article in the Telegraph stating that Confederate monuments deserve Soviet treatment is doubly faulty. First it compares the removal of Soviet communist monuments from Russia after the collapse of the evil empire, but conveniently neglects to discuss the antecedent history (read on), thus afflicted with selective omission by the truncation of inconvenient history. Second, the crimes of the Confederacy cannot be compared to the crimes of Soviet communism, either in war or in peace. Lenin, Stalin and the collective leadership were responsible for a huge slave force with an average lifespan of 3 months (hard labor) in the gulag system, not to mention up to 60 million deaths by every other means.

Under Stalin, disgraced communist leaders became “nonpersons” and were erased from history, cut out of archival photographs even before the days of Photoshop. The lucky ones were summarily shot. The others were sent to the dustbin of the gulag consigned to the memory hole of history. Likewise, inconvenient events were wiped out from the historic record, deleted from pages of the Soviet encyclopedias and replaced with new pages sent by mail to be pasted in place of the old ones.

The demolition of historical monuments and the rejection of history are reactionary and divisive tactics of the bad guys from time immemorial. The desecration (as with the statue of Robert E. Lee at Duke University) and the tearing down of Confederate monuments are only steps behind what mass murderers have done to erase and rewrite history. It is not unlike what Stalin did with the destruction of thousands of churches, including the Cathedral of Christ the Savior, rebuilt by Putin; not unlike the destructive crimes of Mao and his Red Guards during the cultural revolution; not unlike the demolition of towns, villages and decimation of people by the Taliban in Afghanistan; what ISIS has done with the vandalizing of museums in Iraq and the destruction of historic monuments and ancient cities such as Palmyra in Syria, etc.

It is the denying and rejection of history as well as an attempt to erase history. But these actions are and should be criminal. In fact, the UN, not a conservative but a globalist organization, considers historical vandalism a cultural war crime, and those crimes are now being prosecuted by the International Criminal Court (ICC).

For example, the crimes committed by the Islamic terrorists in Mali, who are linked to al-Qaeda, committed cultural war crimes when they occupied Timbuktu in 2012, imposed sharia law in the city, and destroyed Timbuktu priceless books and mausoleums listed in UNESCO’s World Heritage sites. The captured Islamist extremist Ahmad al-Faqi al-Mahdi was tried as a cultural war criminal and he pled guilty at the International Criminal Court (ICC) last year. Despite expressing remorse, he was sentenced to nine years in jail and fined $3.1 million in restitution.

Those who reject history today are of two types: Those easily manipulated by ignorance led to reject the past without even knowing their history. The others are the communists, socialists, and fellow travelers of whom there are today legions in the Democrat Party, who knowingly are following the footsteps of their secret, venerated Marxist saints, Stalin and Mao.

President Trump has transcended political correctness by correctly condemning both sides. Violence does not attain a moral high ground for either side. He is also correct when in dealing with the issue of the removal of the statues, he asks, “And after Robert E. Lee and Stonewall Jackson, who then, George Washington?”

This article may be cited as: Faria MA. Liberal intolerance — Tearing down monuments, rejecting history. HaciendaPublishing.com, August 17, 2017. Available from: https://haciendapublishing.com/liberal-intolerance-tearing-down-monuments-rejecting-history-by-miguel-a-faria-md/

This commentary also appeared on the Telegraph (Macon) and GOPUSA.com on August 17, 2017.