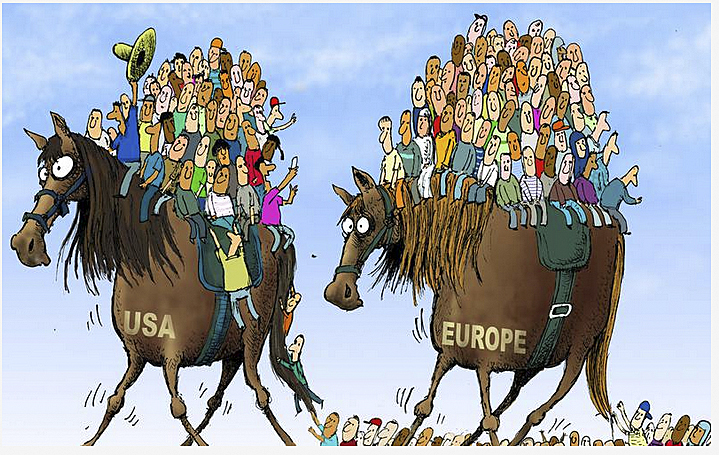 It has been said that truth is the first causality of war and we have been at war with the collectivist elements for the past two hundred years. One among many demands by the delusional left is that we should have open borders and that protected borders and using a rational and legal method of choosing who can enter our country and become a citizen is unAmerican, heartless and evil. With fake tears in his eyes and in a trembling voice Senator Charles Schumer (D-NY) tried to convince the nation that protecting our borders is indeed unAmerican. The conscripted mind of the leftist followers all repeat this mantra unexamined, as if it is were an obvious reasoned idea.

To want to protect our borders from being invaded by hordes of other nations’ misfits, criminals, violent gangs and drug dealers as well as trained terrorist armies bent on our destruction, is considered mean spirited, heartless, cruel and — well, fascist by the deviant left. Now, to those of us who have actually read history, we know that using the term fascist to categorize one’s enemy was engineered by Stalin to describe the members of the regime of his previous partner in world revolution, Hitler. The idea being to demonize his new turncoat enemy by using the name of a political ideology that he himself endorsed just a short time prior to Hitler’s betrayal. In fact, the new communist is a red fascist (by the Gramscian idea of the long march).

Even if we ignore the criminal and destructive elements that wish to enter our country, one must appreciate that our culture is still the freest, most productive and holds more opportunity for the individual than any other country in the world. To open our doors to the world would mean not thousands but tens of millions would flow into our country. Can we really suddenly, with no chance of assimilation, accommodate 50 million or 100 million more people in our country? They would take away the jobs of our own citizens as is happening now and they would overwhelm our hospitals, clinics, welfare institutions, schools and housing availability, leaving Americans to pick up the bill. Already we have a number of hospitals that have had to close their doors because of the influx of illegal immigrants — leaving our citizens without local health care. It would mean every city would have whole sections of poor immigrants who couldn’t speak English, who were chronically unemployed and who have carried with them the primitive culture they came from — often a violent culture. This is happening right now in Europe and the UK.

The leftist elements are driving forth a program to destroy free speech, demonize its enemies, attack them physically as well as intellectually, and riot and burn at every opportunity — just as the fascists and communists have done throughout history. Hate speech in the leftist lexicon means anything that disagrees with their totalitarian idiocy. Recently, one of the leftist groups tweeted that they would not hesitate to kill the children of those who published anything opposed to their rambling hatred. One must ask the obvious question — Would you really want these people to rule you — to control society?

In this discussion, I only want to consider immigration of the Islamic believers. The Western nations agreed to accept millions of Islamic refugees on the basis of compassion for oppressed people. What seems to have escaped most defenders of this policy as well as the lethargic among our population is the question — Who exactly are they escaping? Are they escaping persecution and mass killing by Christians? By Nazis? By Europeans or Americans? No, they are escaping mass murder by their own religious believers in Islam — it is a religious civil war, a Jihad within a Jihad. In fact, since this war began they have slaughtered 90,000 Christians and sent millions into dangerous refugee camps. At the same time, they have killed several hundred thousand Muslims. Their principle enemy in the region includes those who have a slightly different Islamic belief — Shia vs Sunni. Why should we get in the middle of a religious war that in no way should concern Americans?

Because the Islamists have decided to fight among themselves and murder themselves in mass numbers they now, along with the leftists of the world, expect the Western nations to take them in as permanent residents. This is despite the fact they have publically and unendingly stated they seek to put the entire world under sharia law and under socialist Islamic rule. Further, they openly state that they plan to exterminate every Jew in the entire world — that they plan to complete Hitler’s original plan. In addition, all other religions are expected to convert to Islam or die or live in oppressive enclaves as third class citizens. In essence, they and their leftist followers, are insisting the West commit suicide and agree to the destruction of their culture.

The leftist followers cannot seem to grasp the notion that when millions of Islamists enter the United States they will hold in their hands the power to fundamentally change America, not just by violence, but by the power of the vote. France, Germany, Belgium, Sweden and Norway are under such an attack today; yet being leftist collectivists, many still cannot see it. Leftist followers always seem to have great difficulty learning the lessons of history — contemporary and ancient.

There is a videotape made by a former marine now Department of Defense contractor working in Iraq who makes the most powerful case for severely restricting immigration of Islamic believers. He describes sitting around with Islamic soldiers who are supposed to be our friends, discussing President Trump’s new temporary immigration halt from seven Islamic terrorist states (all chosen by Obama). They are in an angry uproar over the policy, expressing their view that it is a betrayal. He then asked them what would happen if he were to step outside their military compound into the city. They tell him, unashamedly, that he would be captured, tortured severely, and then killed by beheading, which would be videotaped. He then tells them — “If you don’t want me in your society — your country, why should I invite you into mine?” He then tells them — “You will have the same hatred for Americans once you are in my country that you express now.” He then points out that the people who would kill him were not ISIS or any other terrorist group; they were ordinary citizens of the country.

My question would be — So then, why are we defending these people who hate us so much that they would torture and behead our soldiers? Why are our soldiers dying to defend these people? Why would we invite hordes of people who profess their hatred for everything Western into our country? Only a fool would do such a thing and the left are indeed fools. The vast majority of these immigrants are young men — most who are escaping military service; they are cowards. Yet, they hate America. We must also keep in mind when these intellectual midgets in our country scream that we are fascists, that the Muslim Brotherhood was nurtured and turned into the force it has become in the Middle East by Hitler himself. Historians of the era tell of seeing Hitler’s picture hanging on the wall in houses of millions of Arabs during Hitler’s rule. Further, Amin al-Husseini, former Grand Mufti of Jerusalem (1921-1937) and one of the principle founders of Arab fascism, was promised by Hitler rule of the Middle East once Hitler won the war. The idiot left is defending the real fascists — as usual.

President Trump and conservatives in general, have as the core of their principles, a belief in a central government of dramatically reduced size and scope, and maximization of the rights of the individual. The left, as a matter of principle, desires a powerful central government, suppression of the individual by the collective and absolute control of virtually every aspect of the individual’s life — what he shall eat, what he can wear, what job he well have, where he will live, his occupation, what information he shall have access to, and what beliefs he should be allowed to hold. The left is hell bent on destroying all traditions, cultural beliefs, Western institutions, religious understandings, and information that might in any way contradict the absolute insane beliefs they hold so dear. They have introduced a program of deviancy, cultural devastation and empowerment of every form of aberrant behavior known —including Lesbian, Gay, Bisexual, Transgender (LGBT), postmodernism, a “living” Constitution, obliteration of the rule of law, and the end of free choice, compulsion with forced government mandates — emanating from their warped minds. During the confirmation hearings, I was appalled to listen to idiot leftist after idiot leftist ask these serious men as their main question how they intended to treat LGBT — they even asked the future secretary of the Department of Defense that question — as if everything hinged on their deviant sexual view.

I can only pray that the good Lord will give President Trump the guidance and strength to continue his quest to return this nation to sanity — to the principles that made it great.

2. Blaylock RL. The Use of Propaganda and Psychological Warfare by the Left. HaciendaPublishing.com, August 8, 2016. Available from: http://haciendapublishing.com/the-use-of-propaganda-and-psychological-warfare-by-the-left-by-russell-l-blaylock-m-d/.

This article may be cited as: Blaylock RL. Immigration, truth and the delusional left. HaciendaPublishing.com. February 8, 2017. Available from: https://haciendapublishing.com/immigration-truth-and-the-delusional-left-by-russell-l-blaylock-md/.