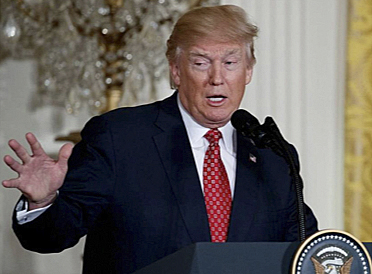 Media duplicity, activist judges, and the attack on Trump’s immigration ban by Miguel A. Faria, MD

The liberal media continue their hostile criticism of everything President Trump says and does. The latest brouhaha has been raised with the fake media outrage against Trump for his critical remarks of U.S. District Judge James Robart, the federal judge in Seattle who halted the enforcement of the executive order banning immigration from seven countries with terrorist ties. The judge’s freeze was implemented allegedly because of the violation of the Establishment Clause of the First Amendment of the U.S. Constitution. Trump had picked these seven predominantly Muslim countries for his travel ban because they had been previously identified by the Obama administration as countries that could endanger the security of the United States. Be that as it may, the Ninth Circuit Court has today ruled against Trump. One wonders what would have happened if Trump had included pariah, atheist, communist North Korea in the ban?

The fact is we may have to wait for the Supreme Court to decide the issue, so I will not discuss constitutionality further. What seems to be lost in all this, though, is that Trump, as President of the United States, has the duty to protect the U.S. from all enemies, foreign and domestic, and protect our borders. But how can he fulfill this obligation as Commander-in-Chief if the courts tie his hands with their politics of judicial activism, backed by the political correctness and propaganda power of the progressive, opinion-molders of the media cartel? The power of the media and political correctness is such that it has even cowed Trump’s candidate for the Supreme Court, Judge Neil Gorsuch, who lamented to the press that Trump’s criticism of Judge Robart was “disheartening and demoralizing.”

The media’s attack on Trump, acting as if they truly were lamenting the excoriation of the judge and offended at the erosion of the prestige of the courts, is hypocritical and ludicrous. The press has tried to elevate the incident, as they have attempted to with others affecting Trump, to an imminent constitutional crisis — as if Executive vs. Judiciary duels had never happened in American history, and as if American presidents have accepted judicial rulings without a fight and as sacrosanct verdicts. Listen to NBC News:

“President Donald Trump’s personal attack on the federal judge who blocked his controversial travel executive order could undermine public confidence in an institution capable checking his power, say legal experts. The fallout from Trump’s Twitter tirade against U.S. District Judge James Robart — in which he dismissed a respected jurist as a ‘so-called judge’ — continues to dog the new president.”

And did we ever hear the media criticize Obama for anything? Did Obama ever say anything “controversial,” fulminated any “tirades,” or did he ever “undermine public confidence”? Of course he did all of the above; but no, he was lionized and treated as an imperial royalty for everything he said or did! Roger Aronoff of Accuracy in Media (AIM) accurately asks, “Where was their criticism of Obama when he attacked and pressured the courts to rule in his favor, or condemned them after rulings went against him?” In 2010 after the Citizens United decision was rendered by the Supreme Court, Obama fulminated, “With all due deference to separation of powers, last week the Supreme Court reversed a century of law that, I believe, will open the floodgates for special interests, including foreign corporations, to spend without limit in our elections.” Where was the media outrage?

And again commenting in the Obamacare ruling King v. Burwell, Obama told Reuters, “In our view, [there was] not a plausible legal basis for striking [the IRS rule] down.” In this case, the media not only did not criticize Obama, but as AIM predicted, the media “marshaled their forces in defense of Obama and his signature legislation.” Obamacare passed, as Nancy Pelosi advised, before the legislators knew what was in it.

But let’s now briefly check our history to see if these Executive-Judiciary duels were unprecedented. Our third president, Thomas Jefferson not only criticized but even encouraged the House of Representatives to impeach Associate Justice of the Supreme Court Samuel Chase (1796-1811) when the judge expressed Federalist opinions in his rulings. The judge was acquitted.

Jefferson was even more critical of the Judiciary in general: The opinion which gives to the judges the right to decide what laws are constitutional and what not, not only for themselves, in their own sphere of action, but for the Legislature and Executive also in their spheres, would make the Judiciary a despotic branch. (Letter to Abigail Adams, September 11, 1804)

The Constitution, on this hypothesis [i.e., balance of power with three independent branches of government], is a mere thing of wax in the hands of the judiciary, which they may twist and shape into any form they please. (Letter to Judge Spencer Roane, Sept. 6, 1819)

And here is one of my favorite judicial quotations from Jefferson: The germ of dissolution of our federal government is in the constitution of the federal Judiciary; an irresponsible body (for impeachment is scarcely a scare-crow) working like gravity by night and by day, gaining a little today and a little tomorrow, and advancing its noiseless step like a thief, over the field of jurisdiction, until all shall be usurped from the States, and the government of all be consolidated into one. (Letter to Charles Hammond, August 18, 1821)

And what was the attitude of the real founder of the Democrat Party, President Andrew Jackson, toward the Judiciary? He went further, and ignored court rulings — when he felt he could ruled on constitutionality better than the courts, or where like Jefferson, he opined the court interfered with Executive prerogatives. For example, Jackson was very displeased with John Marshall and the Supreme Court and in the ruling, Worcester v. Georgia (1832), where the Supreme Court ruled favorably towards protecting the Cherokee Indian’s land, Jackson was incensed. He railed against the legendary Chief Justice of the Court: “John Marshall has made his decision; now let him enforce it.” Without the president’s enforcement of the ruling, the judicial opinion became meaningless. The militia of Georgia encroached on the Cherokee lands and subsequently in 1835, the Cherokees were removed from Georgia and forcibly relocated in Oklahoma in the famous “Trail of Tears.”

But historic truth is no obstacle to the liberal media, and history, if inconvenient, is trampled or ignored. The press talks about “fake news” by others, those not anointed in the club of the progressive, opinion-molders of the media cartel; but claiming that Trump’s attitude to judges is unprecedented and “could undermine public confidence in an institution capable of checking his power” is artful and biased opinion — subjective reporting, considerably worse and more damaging to the public than outright “fake news” because they pass these biased opinions as objective reporting. Americans will take the media and journalism more seriously, if and when, the media regain the public trust with more truthful, balanced, and objective coverage. The almost farcical war on Trump’s every move proves that return to journalistic ethics is far from being the case, and that instead journalistic partisanship, like many other aspects of the zeitgeist of our time, is at a nadir in American contemporary culture.

This article may be cited as: Faria MA. Media duplicity, activist judges, and the attack on Trump’s immigration ban. HaciendaPublishing.com, February 12, 2017. Available from: https://haciendapublishing.com/media-duplicity-activist-judges-and-the-attack-on-trumps-immigration-ban-by-miguel-a-faria-md