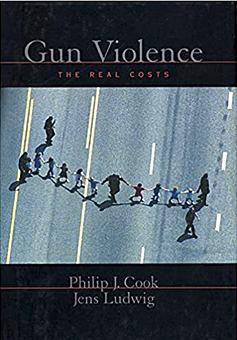 In a new book, Gun Violence: The Real Costs (Oxford University Press, 2000), to be released next month, economists Philip J. Cook of Duke University and Jens Ludwig of Georgetown University have upgraded the health costs of gun violence from the previously erroneous figure of $20 billion to $100 billion.

To reach this astonishing figure, the authors used a novel approach, “contingent valuation.” By contingent valuation, Cook and Ludwig simply asked people in a telephone survey how much they were willing to pay to avoid the problem of “gun violence.”

Thus, from a “nationally representative telephone survey” whereby “1,200 people were asked how much they would pay per year to reduce criminal gunshot injuries,” they virtually extrapolated to the entire population.

This approach, as if it needed to be said, is as grossly unreliable as the public health use of risk analysis to prove “relative risk” in epidemiological studies. By this type of flawed methodology, public health “scientists” proved that women who wore brassieres all day are 12,500 times more likely to contract breast cancer than “flower children” women who go braless!

Cook and Ludwig included in their methodology “the much larger price, the devastating emotional costs experienced by relatives and friends of gunshot victims, and the fear and general reduction in quality of life that the threat of gun violence imposes on everyone in America, including people who are not victims.”

Adding these numbers, the authors came to $80 billion. The other $20 billion comes from previous estimates of “lifetime productivity loss.” This type of study is the one that Dr. Edgar Suter, chairman of Doctors for Integrity in Policy Research, had previously debunked and tagged with a more realistic figure, downgrading the sum to an actual cost of $1.5 billion, less than 1 percent of annual U.S. health care expenditures.

Dr. Suter wrote, “Claiming that gunshot wounds create costs of nearly half the annual U.S. health care expenditures requires estimates of ‘lifetime productivity lost,’ where every gangbanger is a brain surgeon and every rapist is a rocket scientist.”

In short, contingent valuation is an even more extravagant methodology than lifetime productivity estimates or relative risk analysis used erroneously by public health researchers, in this case, to inflate health care costs due to guns.

This statistical legerdemain is consistent with the biased, politicized, results-oriented research which we have seen coming out of the public health establishment in recent years. It should be disregarded in the same fashion as the previous false alarms, like the Alar apple scare and the EPA-overstated danger of secondhand smoke and of particulate matter to lung ailments, not to mention the various other cancer scares.

These new, extravagantly inflated figures of health care costs due to gun violence should be considered suspect and looked at with great skepticism.

Constitutional and philosophical issues aside, what we do know is that the benefits of guns far outweigh their criminal misuses.

As professor Gary Kleck of Florida State University has demonstrated, the defensive uses of firearms by citizens amount to 2.5 million times a year and dwarf the offensive criminal gun uses.

Professor John R. Lott of Yale University has also corroborated the beneficial aspects of firearms in the hands of ordinary, law-abiding citizens. He found all types of crimes — homicides, rapes, robbery, assaults — went down (and remain low) in those states that allow citizens to carry concealed firearms for protection of self and family.

Unfortunately, in their new book, Cook and Ludwig continue to make the mistakes made by the public health establishment in not considering the beneficial aspects of firearms by ordinary law-abiding citizens.

The fact remains that between 25 and 75 lives are saved for every life lost to a gun. Moreover, medical costs saved are 15 times greater than costs incurred by criminal use of firearms.

Guns prevent injury to good people and protect billions of dollars of property every year.

Miguel A. Faria Jr., M.D., is editor in chief of Medical Sentinel of the Association of American Physicians and Surgeons (AAPS), and author of Vandals at the Gates of Medicine (1995) and Medical Warrior: Fighting Corporate Socialized Medicine (1997). Web site: HaciendaPublishing.com.

This article may be cited as: Faria MA. Guns and Phony Health Care Costs. NewsMax.com, September 22, 2000. Available from: https://haciendapublishing.com/guns-and-phony-health-care-costs/.