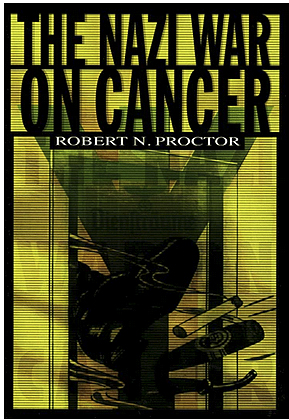 The Nazi War on Cancer by Robert N. Proctor is a deeply disturbing book for it describes in a good light what the author calls “the lesser-known ‘flipside’ of fascism-the side that gave us struggles against smoking, campaigns for cleaner food and water, for exercise and preventive medicine.”

The Nazi “accomplishments” include the establishment of medical registries (that is, databases) and medical surveillance, both later used for “euthanasia,” and the linkage of occupational diseases and cancer to environmental poisons. The author, a professor of the history of science at Penn State, also details how Nazi scientists were the first investigators to link and ultimately prove with elegant epidemiological studies that cigarette smoking causes lung cancer.

Armed with scientific proof, Nazi officials moved aggressively in an all-out campaign against cigarette smoking, and tobacco was proclaimed “an enemy of the people” (Volksfeind). As the author states early in his prologue: “The participation of doctors in Nazi racial crimes is disturbing, but it is equally disturbing that Nazi doctors and public health activists were also involved in what we today might regard as ‘progressive’ or even socially responsible [programs].” But what disturbs Proctor is that he is uncomfortable in the company of some of history’s foremost butchers, for he shares with them the view that it is permissible to use state power for the advance of “public health.”

Proctor points out German physicians and scientists produced genuine medical research, not only during the Nazi era, but long before that. Through much of the nineteenth and twentieth centuries, Germany led the world in scientific achievements, particularly medical research. Nevertheless, those accomplishments must be viewed within their ethical, moral, and historical context. Proctor writes almost dispassionately and always objectively, as the science historian he is. Unfortunately, this book lacks the perspective of a medical ethicist. As a neurosurgeon with a background in medical history and a more than passing interest in medical ethics, I don’t see the Nazi “achievements” in the same positive light that the author does.

The subject of “bioethics” and “medical ethics” and their long-term consequences to German society (or for that matter ours) are not broached in this book until the very end, and then the author’s discussion is contained within only two pages. He even reproaches medical ethicists when he adds: “Bioethical discussions are full of facile identifications of Nazism with everything from abortion and rationalized medicine to doctor-assisted suicide.” That is, Proctor declines to discuss the ethics of the Nazi war on cancer because he dislikes the fact that some medical ethicists have gone too far in linking practices and policies they abhor with Nazism.

I side with the medical ethicists and with those souls, not all of them libertarians as the author implies, who are troubled by further government efforts in our country to protect us from ourselves-for the good of “society”-at the expense of our autonomy and liberties. In Proctor’s utilitarian calculus, freedom evidently counts for nothing. It counted for nothing to the Nazis, too.

Consider that the Nazis themselves declared that occupational medicine, one of the disciplines dear to their hearts, was to make a “worker who would remain productive until retirement and then pass away shortly thereafter.” The aim of the Nazis was “to reduce the difference between the age of retirement and the age of death ideally to zero.” And those were the lucky ones-the members of the master race. For the rest of the expendable “undermen” there was slavery, ghastly medical experimentation, and death in the abominable concentration camps.

There is danger in the unholy partnership of the medical profession and government planners, namely the perversion and subversion of the medical sciences and public health for the new collectivist ethics of population-based medicine. Once medical professionals ally with the state and abandon the individual-based ethics of Hippocrates in favor of the collective good, or as the Nazis put it, “the health of the nation,” the stage is set for a terrible drama.

Parallels must be drawn with our present situation, as much as the author wants to avoid it. In the areas of public health, the politicization of AIDS policy, mandatory vaccine programs, biased research on guns (and its publication in medical journals), and so on, the U.S. government is following the Nazi precedent by casting aside our cherished concepts of individualism in a quixotic crusade for “the common good.”

I strongly recommend this book, particularly to history buffs and those interested in the perpetual struggle between the individual and the state. Its history is immensely valuable, even if the author fails to draw the right conclusions.

Miguel Faria, M.D., is editor-in-chief of the Medical Sentinel, published by the Association of American Physicians and Surgeons (AAPS), and author of Vandals at the Gates of Medicine: Historic Perspective on the Battle Over Health Care Reform and Medical Warrior: Fighting Corporate Socialized Medicine.

This book review was originally published in The Freeman — Ideas on Liberty, October 1, 2000.

I have written and published an illustrated, longer article about this book in the Medical Sentinel (November/December 2000) also posted here in HaciendaPublishing.com for those readers further interested in the subject.