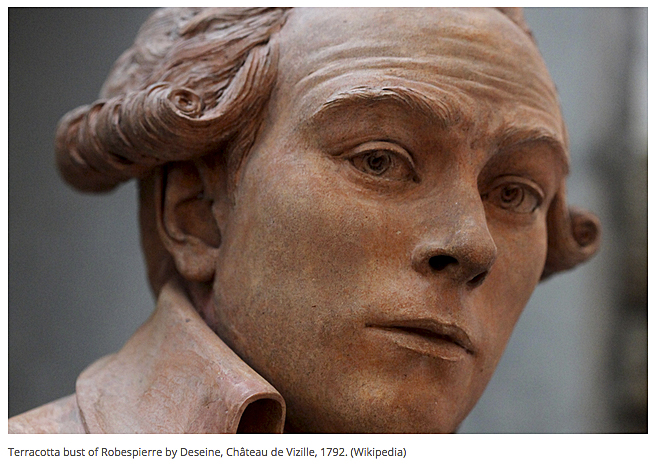 Robespierre: The Fool as Revolutionary by Otto Scott

It begins with the notorious Diamond Necklace affair, which signaled the beginning of this great tragedy and sounded the clarion call of disaffection and intrigue against King Louie XVI and particularly his Queen, Marie Antoinette. When monetary and economic policy failed, this disaffection added fuel to the blaze of fire. The Ancien Régime is then consumed by the fall of the Bastille and the upheaval and conflagration of the revolution.

The French revolutionary government was not a true republic, despite its appellation, but violent democracy in action, degenerating brutally and chaotically into mob rule. The revolutionists led by Marat, Danton, Saint-Just, Hébert, Robespierre unleashed a horrible monster, a monster that, in the end, they could not control, for as Vergniaud said, “The revolution, like Saturn, is devouring its’ own children.”

When the Constitution of 1793 was popularly ratified, its citizens had to vote openly under the watchful eye of the revolution’s 44,000-member Committee of Vigilance. Shortly after, the Constitution, with its lofty goals and rights, was suspended. Anarchy interspersed with tyranny was the order of the day. The Deputies of the Convention ruled by decree and at the pleasure of the oligarchy of the Committee of Public Safety headed by Robespierre and his ultra-radical Jacobins.

Gruesome and so unlike our American Revolution, still one cannot help but draw subtle parallels between some of the events that unfolded during the French Revolution and some of the authoritarian, secular, and collectivist tendencies that have gradually, almost imperceptibly, crept into our American republic. This has taken place in contemporary American society in the name of democracy and in the atmosphere of egalitarianism. Some of these deleterious changes are taking place by the politics of envy, wealth redistribution, and the behemothic growth of the size, power, and scope of our federal government.

We learned from the French Revolution that forced egalitarianism leads to oppression, despite the assertion that equates liberty with equality. The fact is you can have equality of opportunity and of the law, but you cannot have both liberty and equality of outcome. Liberty must allow necessarily for personal choice, social and economic freedom, and their inherent differences. Scott makes it clear the French revolutionists never understood that fact.

The Incorruptible, Maximilien de Robespierre, the Voice of Reason, did not give the French people a Republic of Virtue but a bloody reign of terror with mob rule, despotism, and the descent into barbarism with the mass killings of men, women, and children by their own government, not because of their deeds or misdeeds or real crimes, but because of their birth, opinions, and associations – or simply, for being in the wrong place at the wrong time. The Guillotine was kept busy during the Terror, and when it was not fast enough, other grisly methods were used such as mass drownings, burning, and cannonades.

In his very last paragraph, Scott writes, “Robespierre simply died, but folly has a virulence that outlasts its inventor. He inspired more communes, more voices of virtue, more Lenins, and Castros and Maos, more murder and hatred, more death and misery, than any other of the Sacred Fools that have emerged to plague honest men.”

Indeed, we saw the scissors strategy of applying pressure from above and below as when the bloodthirsty mobs of the French Revolution and the Paris Commune intimidated the National Assembly with their swords and pikes, marching outside the Convention at the Tuileries demanding change in government policy or blood from their enemies, while the leaders of the Jacobin Club serving as Deputies clubbed the Convention from within, haranguing the assembly from the speaker’s podium, calling for the same changes as the mob in the name of the people.

This scissors strategy to force destructive change was assimilated as dialectics by Karl Marx in his Communist Manifesto. It was learned well and followed by the communists in their road and consolidation of their power in their totalitarian regimes. We have seen this methodology followed in the 20th Century in varied forms in the former Soviet Union, Red China, Cuba and the other former satellites.

In the Jacobin Club, Maximilien Robespierre developed the methods of self-criticism, public confession, and purges which were later emulated and followed by totalitarian regimes of the 20th Century with their neighborhood committees, revolutionary tribunals, the administration of people’s justice, and mass executions. The radical journals and pamphlets together with the long speeches at the revolutionary clubs paved the way for manipulation of the press, the learning of the methods of mass psychology and indoctrination.

Clear and vivid pictures emerge in this book about the main participants in the French Revolution. Monsters such as Marat, Saint-Just, Barère, Hébert and others are contrasted with more picturesque and variegated figures such as Count de Mirabeau, Marquis de Lafayette, the artist David, and even Danton. The reader will also learn about, perhaps, the most grotesque and sinister character of the French Revolution, the repulsive Duc d’ Orléans (later Philippe Egalité).

This book is riveting and spellbinding even for those familiar with the events and details of the French Revolution, and its ultimate outcome. The reader can expect trepidation and suspense, building up to an unrelenting crescendo.

In the end, we cannot wait for the revolution to finally devour its terrible, bloodthirsty children, and for the head of The Incorruptible, Robespierre himself, to fall. As to why Robespierre is called a “fool” by the author, you will have to get the book and read it!

Miguel A. Faria, Jr., M.D. is Editor-in-Chief of the Medical Sentinel of the Association of American Physicians and Surgeons (AAPS) and author of Vandals at the Gates of Medicine (1995) and Medical Warrior: Fighting Corporate Socialized Medicine (1997).

This book review may be cited as: Faria MA. Robespierre: The Fool as Revolutionary by Otto Scott. Amazon.com, October 15, 2000. Available from: https://haciendapublishing.com/robespierre-the-fool-as-revolutionary-by-otto-scott/.