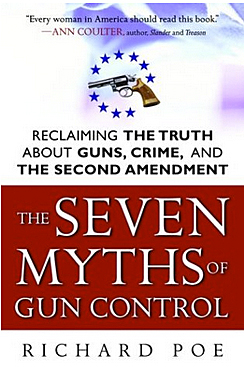 Gun Myths and the Warrior Spirit

As stated in the subtitle of The Seven Myths of Gun Control, the former editor of Front Page Magazine, Richard Poe, successfully reclaims “the Truth about Guns, Crime, and the Second Amendment” in this magnificent book. With logical arguments and factual information, he rebuts what he identifies as the seven most important myths underpinning gun control and their assumptions.

And Poe accomplishes much more than just debunking the myths. He convincingly demonstrates in his suave, almost casual tone that gun control is a concerted attack on the Second Amendment to effectively, in the end, completely abolish private gun ownership by ordinary, law-abiding citizens.

He opens the book with a chilling incident that will not only upset you but also jolt you into recognizing the reality that private gun ownership is absolutely essential for protection of self and family. Even in this modern world, the wisdom of the Founding Fathers enshrined in the God-given right to keep and bear arms to defend country and hearth is absolute and transcends time.

Even if you have heard about the shocking case of Jessica Carpenter, you will shrink in horror at the tragic story and the perverse, unintended consequences of gun control rather than criminal control, whether on restrictions on the right to carry, the ban of “assault weapons,” safe storage requirements ­ or reliance on 911 and police protection and the advice of “active compliance” when at the mercy of the predatory criminal element.

Ditto for the adverse, ultimate consequence of succumbing to the ongoing government and media campaign to demonize firearms: It has resulted in the erosion of the right to protect self and family and the historic and moral duty to come to the aid of your neighbors.

Poe exposes media bias and distortion when it comes to the issue of gun control, and explains with clarity the historical and philosophical foundations for the right of citizens to keep and bear arms. He writes on page 47: “Basic rights and freedoms are not granted by the government in exchange for good behavior. They are ours by right, God-given and unalienable, which means that no government may take them away, for any reason, under any circumstance.”

In debunking the myth that “guns increase violent crimes,” he also rebuts the false assumptions that America is more violent than other nations, showing that more people during the 20th century have been killed in other countries by their own governments than by war, and that scholarship has shown that gun control laws have almost always preceded democide, mass murder by government.

Poe elucidates the historic reality of the Wild West, citing Roger D. McGrath’s book, “Gunfighters, Highwaymen and Vigilantes,” and other sources. Violence in the West was confined to “drunken young men in saloons but decent citizens who avoided the saloons were left unmolested.” Rampant street crime as we have today, particularly in the inner cities, was almost non-existent in the old West.

Politically incorrect, Poe discerns the real culprits behind the “Culture of Violence,” citing government statistics as well as scholars and other sources. He defends his former mentor and boss, David Horowitz, who “defied journalistic taboo surrounding race and guns in America” with the publishing of a column in 1999 entitled “Guns Don’t Kill Black People; Other Blacks Do.”

Horowitz was attacked by a writer in Time magazine as a “bigot”; Poe writes, “a denunciation such as that might have ruined a lesser man; but not Horowitz, who fought back and set the record straight.”

Poe shows that while the U.S. and Switzerland have more guns per capita than any of the other developed countries, we have a heck of a lot more freedom than countries with draconian gun control laws. The sections comparing Japan, a country with a centuries-old tradition of subservience of the individual to the state, and where “the nail that sticks out will be pounded down,” is compared in stark contrast to Switzerland, where virtually every citizen is armed and individual freedom is paramount.

Citing attorney and scholar David B. Kopel (The Samurai, The Mountie, and the Cowboy) and other sources, Poe teaches us that the militaristic spirit of the old samurai warrior is today found in Japan’s elitist, privileged Police Force.

Japan may have a “low crime rate but citizens live in a virtual police state where cops keep full dossiers on every citizen,” and “twice a year, each Japanese homeowner gets a visit from local cops to update files” on every aspect of his/her home life. This, Poe opines, is a model Americans would not want for our nation. The present-day Japanese citizenry has become the subservient peasants of medieval times, bowing deeply to their superiors in the Japanese Police Force.

On the other hand, there is Switzerland, a small, landlocked country, which stood up against the Nazi threat during World War II because each and every male citizen is armed and free ­ the “Sister-Republick” that our Founding Fathers so greatly admired.

Citing Stephen Halbrook’s Target Switzerland, Poe describes how Germany could have overwhelmed Switzerland but the price was too steep for the German High Command. Instead, the Nazi juggernaut trampled over Belgium, Luxembourg, Holland, Norway and other countries and avoided the Swiss nation, the “porcupine,” which was prepared for war and its military ready to die rather than surrender.

The rise in crime in countries such as England and Australia, which implemented draconian gun control laws following mass shooting incidents there in 1996, is also discussed.

Needless to say, Poe debunks the rest of the gun control mythology, point by point, with logical arguments and incontrovertible evidence. Yes, guns can be used successfully for self-defense, and older children can be taught gun safety and the responsible use of firearms for protection of self and family.

He, like James Madison, believes that citizens should be informed and vigilant because governments have an unquenchable thirst to usurp power at the expense of their unwary citizens. The pretext of terrorism (and he wrote this warning before Sept. 11, 2001) can be used to curtail civil liberties and pass draconian gun control laws. Thus, Poe reminds us, Madison warned us that “crisis is the rallying cry of the tyrant.”

Yes, the threat of popular insurrections, coupled with a free citizenry armed with private small arms ­ particularly semi-automatic assault weapons ­ can deter tyrants and prevent the imposition of dictatorships in a free society. Being armed and ready keeps us free from foreign threats as well as from danger from our own government.

In the case of common crime, he cites grisly examples where “active compliance” (cooperating with criminals) has resulted in deadly massacres, rapes and, in the end, undignified deaths, reminding us that a woman with a firearm who is prepared to use it in self-defense is half as likely to be injured as one who submits.

One of the most fascinating sections of the book is the discussion pertaining to the feminization of our society and what he considers the approaching “end of manhood.” This is a compelling theme throughout the book, including the section about how our children are being “educated” in our public school system. Aggression is natural, and mock violence in children’s play is not abnormal. Yet it’s being suppressed in our schools with “zero tolerance” policies and other politically correct nonsense that actually hurts our children’s mental growth and development.

In the epilogue, Poe notes how, to our detriment, society is becoming feminized, devoid of real heroes and moral absolutes. He discusses the men’s movement of the 1980s and ’90s, the development of the “soft male” mentality, and “the fading of the warrior” spirit ­ all deleterious, long-term effects of the feminization of our society.

This extended epilogue sums up and ties together two undercurrents ­ a political one: the feminist movement’s derivation from Karl Marx’s theory of communism, the abolition of marriage and the destruction of the family; and the Freudian-psychological one: displaced rage in members of the gun control movement with suppressed violence and aggression projected onto others who do not share their gun prohibitionist views.

Could it be that for some radical feminists, who fear their own inner violence (i.e., “reaction formation”), the subconscious male castration that they desire for their liberation is abnormally channeled toward gun control, civilian (male) disarmament and the end of manhood itself? He quotes authorities, such as psychiatrist Dr. Sarah Thompson, who affirm that this indeed may be the case.

Don’t be fooled by the unassuming title of this fascinating book. With this easy-to-read tome, Richard Poe does much more than merely debunk “the seven myths of gun control” ­ he tramples them. You must read his book!

This article may be cited as: Faria MA. Gun Myths and the Warrior Spirit. NewsMax.com, July 10, 2002. Available from: https://haciendapublishing.com/gun-myths-and-the-warrior-spirit/.