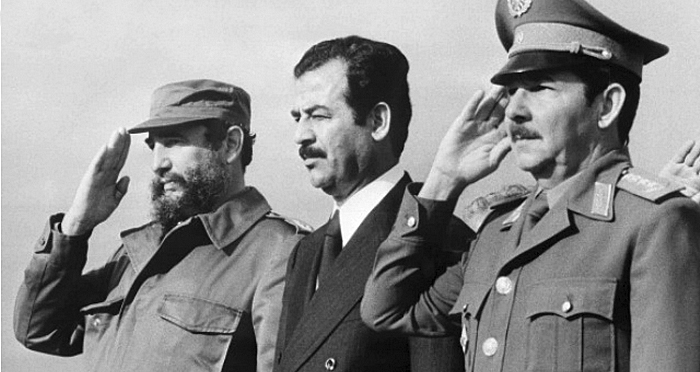 The latest news, as reported by UPI and carried in the NewsMax.com wires, has not underestimated the seriousness of the infection caused by the West Nile virus. Indeed, in Louisiana, which has already reported five deaths so far, Lt. Gov. Kathleen Blanco, who doubles as the head of the state’s tourism agency, announced on Aug. 6 that cans of insect repellent will be made available free of charge at visitor centers located near the state’s borders.

And yet, so far only NewsMax.com, the Medical Sentinel of the Association of American Physicians and Surgeons, the appendices in my book, Cuba in Revolution: Escape From a Lost Paradise, and a few other sources have brought up the frightening possibility that these outbreaks may be a direct result of a joint biological terrorism project between Iraq and Cuba.

Two experts, Ken Alibek, author of “Biohazard” and former deputy head of the Soviet biological warfare project, and Dr. Manuel Cereijo, professor at Florida International University, believe that this indeed could be the case.

Incidentally, Iraq has also obtained lethal strains of anthrax from the American Type Culture Collection in Rockville, Md., one of the world’s largest libraries of microorganisms. For $35 the Iraqis were also able to obtain strains of tularemia and Venezuelan equine encephalitis, once selected for biological weaponry at Fort Detrick, Md. By the early 1990s, Iraq had transferred these virulent anthrax strains to Cuba for further development.

Additionally, two Cuban scientists, Dr. Luis R. Hernandez, who defected in London in 1995, and Carlos Wotzkow, an ornithologist living in exile in Switzerland, have asserted that Castro created the Frente Biologico (Biological Front) to wage biological warfare against the U.S.

Why? Because the Castro brothers, who have a visceral hatred for the United States, blamed the U.S. for several outbreaks of dengue fever in the eastern part of the island in the late 1980s and 1990s. That disease not only imperiled the growing Cuban tourism industry but also personally embarrassed Fidel Castro, who had previously claimed that mosquitoes had been eradicated from the island!

Dr. Hernandez worked in the Frente Biologico and has asserted that “those were laboratories to identify and produce viruses to be used in birds as ‘hosts’ for their dissemination.” Wotzkow relates in his 1998 book, “Natumaleza Cubana,” that he lost his job at the Institute of Zoology in Cuba when he objected to the work of developing viruses that could be carried by migratory birds into the U.S.

It turns out that the strain of West Nile virus found in New York in 1999 and last year in Israel is the same strain. In 1999, Iraqi president Saddam Hussein referred to “his final weapon, developed in laboratories outside Iraq Free of UN inspection, the laboratories to develop the SV1417 strain of the West Nile virus.” The missing link of cooperation between Iraq and Cuba is Dr. Rodrigo Alvares Cambria, a Cuban orthopedic surgeon who operated on Saddam’s son after he hurt his back in an accident.

When former U.S. president Jimmy Carter visited Cuba earlier this year, he didn’t include any biological weapons experts in his entourage to inspect the Frente Biologico. He simply took Fidel Castro’s word at face value that Cuba did not possess such weapons of mass destruction. And yet, what better place for Cuba and Iraq to conduct biological terrorism against the United States than 90 miles from U.S. shores!

Before 1999, this viral infection was unknown in the Western Hemisphere. Thus, I am citing several references below that may be of interest to the reader given the fact that frightening new cases of West Nile virus are emerging in other states in the nation. The references provide several pieces to the puzzle of why we may be experiencing this new infestation. Isn’t it time for the supranational arm of the United Nations to send impartial inspectors to communist Cuba?

8. Cereijo M. If Ana Belen Montes would have been ? April 2002, http://www.amigospais-guaracabuya.org.

Miguel A. Faria, Jr., M.D is Editor-in-Chief of the Medical Sentinel and author of “Vandals at the Gates of Medicine” (1995); “Medical Warrior: Fighting Corporate Socialized Medicine” (1997); and “Cuba in Revolution: Escape From a Lost Paradise” (2002). All three books available from HaciendaPublishing.com.

This article may be cited as: Faria MA. Iraq and Cuba — Fitting Pieces in the West Nile Virus Puzzle? NewsMax.com, August 9, 2002. Available from: https://haciendapublishing.com/iraq-and-cuba–fitting-pieces-in-the-west-nile-virus-puzzle/.