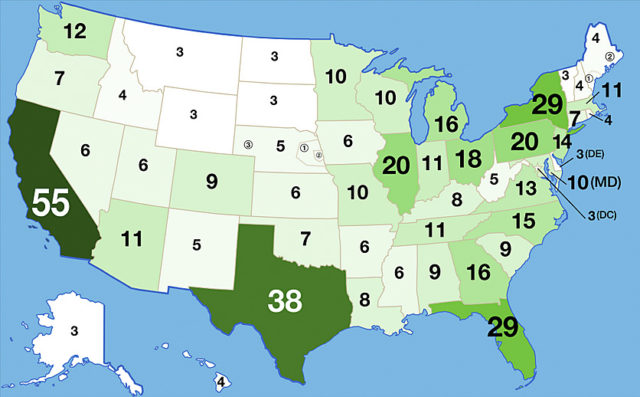 Faria: The Electoral College in the U.S. Constitutional Republic

This summer at least three editorials have appeared in my local, Georgia newspaper, the Macon Telegraph, about how the Electoral College process works and explaining why our Founding Fathers created that system for presidential elections. They were not always accurate. One writer, for example, wrote, “The framers… felt the common, everyday, average, eligible voter was not intelligent, well-versed, well-read and knowledgeable enough to vote for the most qualified and best candidate.”

Although that statement is certainly another good reason to maintain the process of presidential elections today, it is historically incorrect. While it is true the Founders distrusted the idle mobs of the cities, the vast majority of Americans in the late 18th century lived in rural districts as farmers and yeomen, working the land and living from the fruits of their labors. These Americans were almost idolized by the Founders, particularly the Virginians Thomas Jefferson and James Madison.

Moreover, from their knowledge of history, the Founders knew the tragic fate of Athenian democracy and the death knell of the Roman Republic at the hands of Rome’s notorious mobs, who incited by popular demagogues eventually sold their votes for “bread and circuses” (i.e., panem et circenses) in the forms of free gladiatorial games and other sordid entertainment.

The framers, including James Madison, the master-builder of the Constitution, were in general very eerie of establishing a direct mass democracy on principle and founded a constitutional republic with an indirect presidential and senatorial election, hoping in the words of Benjamin Franklin, “that we can keep it!”

The fact that the framers trusted the vast majority of Americans at the time is evident in that the House of Representatives, which was to represent the people, was, and continues to be, elected by direct popular vote. In the words of Madison (Federalist Paper #57):

“Who are to be the objects of popular choice? Every citizen whose merit may recommend him to the esteem and confidence of his country. No qualification of wealth, of birth, of religious faith, or of civil profession, is permitted to fetter the judgment or disappoint the inclination of the people.”

Most Americans during the American Revolution and Constitutional Convention were very well informed and devoured political pamphlets, such as Thomas Paine’s “Common Sense” and “The American Crisis” voraciously. Those were the best sellers of the day. Later, political articles published in various newspapers (to become the famed Federalist and Anti-Federalist Papers) were equally devoured by the citizenry with the same avidity as today’s trendy Americans consume TV images and online news of the scandalous lives of sport figures and celebrities.

James Madison and Alexander Hamilton (not to mention, John Adams) hoped an informed populace would elect to office the most virtuous and capable public servants, including the President of the United States.

Alexander Hamilton, for example, asserted (Federalist Paper #68): “The process of election affords a moral certainty, that the office of President will never fall to the lot of any man who is not in an eminent degree endowed with the requisite qualifications. Talents for low intrigue, and the little arts of popularity, may alone suffice to elevate a man to the first honors in a single State; but it will require other talents, and a different kind of merit, to establish him in the esteem and confidence of the whole Union, or of so considerable a portion of it as would be necessary to make him a successful candidate for the distinguished office of President of the United States. It will not be too strong to say, that there will be a constant probability of seeing the station filled by characters pre-eminent for ability and virtue…. we may safely pronounce, that the true test of a good government is its aptitude and tendency to produce a good administration.”

The additional reasons the Founders created the Electoral College system (and why it has been preserved) centered on the issues of federalism and fairness — e.g., preserving the delicate geographical political balance among the various urban and rural populations of the small and large states of the federal union.

Thus, the Electoral College as it stands today is more fair and more conducive to encourage candidates to campaign more equitably throughout rural areas as well as urban centers, smaller states as well as larger states, because not doing so may result in the candidates’ loss of an entire state and its slate of electoral votes, rather than just losing small clusters of votes.

Another reason concerning fairness, even more acutely, is the occurrence of natural catastrophes, such as floods or hurricanes, which can disastrously depress the turnout of voters of a region of a state or several states. Yet, with the Electoral College system, these voters are not penalized, because their states would still contribute the same number of electoral votes toward an election.

And yet, the same earlier commentator further opined, “The biggest problem with the current system is the propensity for an election to take place that would elect a candidate who did not represent the demographics and wishes of the entire county, and only the sentiments of voters in the 11 most populous states.”

But there was more; two of the writers suggested drastic solutions, either changing to a proportional representation or a popular election system. The former would be accomplished by individual state legislation, as has already been the case in the states of Nebraska and Maine. Popular election, on the other hand, would be implemented by the more difficult process of amending the U.S. Constitution by the usual process or by calling a convention to that effect. Either one of these radical options would establish a solution that essentially dismantles the Electoral College system to exorcise a boogieman and solve a non-existent problem!

Proportional representation with the fractional casting of a state’s Electoral College votes would drastically dilute the voting strength of the individual state that foolishly adopts it, making that state irrelevant in a nationwide presidential contest. If this proposal were to be uniformly adopted by the nation either by state choice or by constitutional amendment, it would defeat the purpose for which the Electoral College was wisely created by the framers, negating all of the previously outlined benefits.

Likewise, direct popular elections would dilute the power of rural areas and less populated states, so that a heavily populated section of the country, such as the Northeast, could realistically and unfairly determine future presidential elections. That is less likely now with the Electoral College system. One of the safeguards of a constitutional republic still left in place is the Electoral College, a check of federalism against a tyranny of the majority by large populous states against both small states and large but less populous areas. Its abolition would be a disaster for federalism, the balance between geographical areas, as well as Alexander Hamilton feared in Federalist #68, the passions and ferments of the mobs in the urban areas.

The truth is a non-existent boogieman is being conjured up by various political pundits to transform our Electoral College presidential elections into a European parliamentary type system, incorporating features of both proportional representation and popular elections. The boogieman is really a straw man fallacy — namely, that the theoretical amalgamation of 270 Electoral College votes by the eleven most populous but politically disparate states would dominate elections. Such possibility has never and will never happen, and is totally unrealistic and unfounded. Imagine Texas and New York with Georgia and California joining forces to steal elections and enslave the country!

The reality is that the Electoral College process has shown that it has worked as it was intended, and continues to function well. It has preserved the delicate geographical political balance among the various urban and rural populations of the small and large states of the federal union, and it has prevented small but heavily populated urban areas from dominating the process of presidential and vice-presidential elections at the expense of the rest of the nation.

Those are the main reasons we should not tinker with the Electoral College now. Republicans in particular should remember that this great nation was founded as a constitutional republic, “if we can keep it.” The wisdom of the Founders reverberates through the ages!

Dr. Miguel A. Faria is a former Clinical Professor of Surgery (Neurosurgery, ret.) and Adjunct Professor of Medical History (ret.) Mercer University School of Medicine; Former member Editorial Board of Surgical Neurology (2004-2010); Recipient of the Americanism Medal from the Nathaniel Macon Chapter of the Daughters of the American Revolution (DAR) 1998; Ex member of the Injury Research Grant Review Committee (aka the Initial Review Group (IRG)) of the Centers for Disease Control and Prevention (CDC) 2002-05; Founder and former Editor-in-Chief of the Medical Sentinel (1996-2002); Editor Emeritus, the Association of American Physicians and Surgeons (AAPS); Author, Vandals at the Gates of Medicine (1995), Medical Warrior: Fighting Corporate Socialized Medicine (1997), and Cuba in Revolution: Escape From a Lost Paradise (2002).

Read my last article on this subject that brings up the ongoing battle of the Democrats to abolish the Electoral College.

2 thoughts on “Faria: The Electoral College in the U.S. Constitutional Republic”