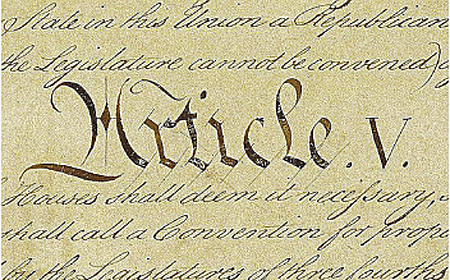 There is a Cuban proverb that reads: Dime con quien andas y te dire quien eres, which roughly translates: “Tell me who your friends are, and I will tell you who you are.” For those who have not studied the issues and ramifications of convening a Constitutional Convention, now referred to as “Convention of States” to make it more palatable to state rights conservatives, the Cuban refrain should ring bells of concern. The Left has brought forth this issue numerous times. Most memorable was the effort by liberal economics Professor Rexford Tugwell (1891-1979), an FDR “Brain Trust” member, suspected American communist, and internationalist known for his global planning strategies. Tugwell helped draft a new more statist, model constitution for the United States giving power to the federal government for economic planning. He hoped to bring about a Constitutional Convention to make his scheme a reality between 1945-1948. There was even a novel written featuring Tugwell being elected President of the United States after FDR! God help us!

More recently a Harvard Conference was convoked in 2011 calling for a Constitutional Convention to attract Tea Party conservatives to the movement. The fact the notoriously liberal Harvard Law School initiated this event should give us enough concern before we jump into the water. This Conference was hosted by Harvard Law Professor Lawrence Lessig, not a constitutionalist conservative but a populist liberal who also supported Senator Barack Obama in 2008. A moderator of the Conference was Richard Parker, a member of the 1960s radical organization, Students for a Democratic Society (SDS). A Constitutional Convention has also been promoted since the 1970s by liberal California Governor Jerry Brown.

As far as Establishment Republicans who may lead the charge, consider the possibility of “reliable” Senators John McCain (Arizona), Orrin Hatch (Utah), and Lindsey Graham (South Carolina) — enough unreliability to cause us to give pause before we jump into the increasingly murky water!

Propelled by Mark Levin’s book, The Liberty Amendments (2013), a Mount Vernon Assembly was convened in December 2013 in which nearly 100 state legislators representing 32 states assembled to discuss the planning of a “Convention of States” in 2014. A Convention of States, as we have mentioned, is nothing but a Constitutional Convention with a euphemistic and more appealing title, a danger to the Republic, as I discussed in a previous article. As to the timing, which is the main reason that calls to convene a Convention are being made at this time when Republicans possess a majority of state legislatures — we should also give pause. Constitutional Conventions have been urged since the 1970s repeatedly based on a variety of issues, from a balanced budget to anti-flag burning, mostly “conservative” initiatives — who knows when it will be that enough states will sign up to seal the deal? Moreover, there is no unanimity as to what consensual stands will be taken between Republican moderates and Tea Party factions — who knows what side of the issues the moderate Republicans will take? Can GOP representatives in the guise of Senators McCain, Graham, Hatch, for example, be trusted by conservatives with this sacred trust — a new or revised Constitution for the United States of America? Do we naively believe for one moment that the representatives of both parties, addicted as they are to big government, can be trusted to abide by a new constitution better than the one that our Founding Fathers bequeathed to us?

I have written about this issue before in GOPUSA.com. In my own state of Georgia, fed up with Obama and the increasing dissipations of a run-away federal government, the idea of a Convention of States has gained support in the GOP-led legislature. Some conservatives, I suspect, go as far as hoping to include a proviso for voluntary secession of states as a last resort. RINO (“Republican in name only”) commentators have also expressed support for the idea for different reasons. I write this column with the hope that if the convocation of a Constitutional Convention takes hold throughout the nation and becomes a reality, conservatives at least will be advised of possible perilous pitfalls that must be recognized and avoided before wielding the double-edged sword they lately so ardently wished for!

This article may be cited as: Faria MA. Concerns remain on calls for a “Convention of States” to restore the nation. HaciendaPublishing.com, February 10, 2014. Available from: https://haciendapublishing.com/concerns-remain-on-calls-for-a-convention-of-states-to-restore-the-nation.

The photographs used to illustrate this article did not appear in GOPUSA, but were added here for the enjoyment of our readers at HaciendaPublishing.com.