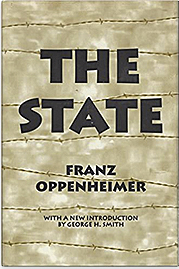 The State by Franz Oppenheimer

The State by Franz Oppenheimer (1864-1943) was recommended to me years ago by friends as a Libertarian classic of political science. However, having just finished this tome, I now suspect that some of them did not actually read the book, but instead only read passages from it. To my consternation, Oppenheimer’s book turned out to be a Hegelian-Marxian treatise on the theoretical formation and development of the State based on the subjugation, conquest, and the endless “class contest” of one class of citizens over another.

I have read other libertarian classics specifically, Our Enemy, the State (1935) by “philosophic anarchist,” Albert Jay Nock (1870-1945), which was indeed influenced by Oppenheimer’s book, and The Law (1850) by the French Republican statesman, Frederic Bastiat (1801-1850), a true classical liberal thinker, who today would be considered, correctly, a conservative. Those two books are more concise and apropos to the immediate subject under study, namely the State and how it functions today using coercion and monopoly of force to subjugate the individual to the collective. This is not the gist of the political philosophy I found in Oppenheimer’s book. To the contrary, let me continue.

Oppenheimer’s The State (1914), allows us to view the political spectrum (as I and others have described it) as a horseshoe with a very narrow gap at the bottom, where the extremes between the Right (Objectivism, Libertarianism, and Anarchy) and the collectivist Left (i.e., Fascism, Socialism, and Communism) almost touch.(1,2) This little gap is the state of anarcho-tyranny. But unfortunately, Oppenheimer blurs the distinctions between these political philosophies by propounding the creation and development of the State based on class warfare (“class contest”), the endless exploitation of one economic class by another using the “political means” (robbery), and by using Marxian jargon and arguments. We are left with his unrealistic, optimistic forecast that the “economic means,” i.e., peaceful exchange of goods and services, will ultimately come to pass when the beneficent State triumphs, conquers all, and ultimately creates a “freemen’s citizenship”! With good reason, Oppenheimer did not call himself an anarchist or libertarian, but a liberal-socialist!

This is a small book, and the first 55 pages are Introductions and the author’s Preface. The book itself is only 130 pages, plus notes and index. The book, though, presents surreptitiously the dilemma of the German sociologists, anthropologists, and proponents of Hegelian dialectics of the late 19th and early 20th centuries about the philosophy of history. These scholars seem to want it both ways: They yearn for political and economic freedom, while at the same time espousing socialism, wealth redistribution, and equality of outcome. One cannot have it both ways and then call yourself a freedom philosopher! Torture the terms and concepts as much as you will, libertarian freedom and economic equality are mutually exclusive terms. Despite a beautiful thesis on the creation and conception of the State, Oppenheimer skirts by this looming contradiction.

Even though he wrote this treatise in 1914, Oppenheimer failed to foresee the horrors of World War I or World War II, but presaged only a contradictory economic equality and liberal-social utopia, when in fact war and devastation, not to mention fascism and communism, were just around the corner!

Oppenheimer also failed to foresee that the upper “ruling classes” would use the State to rob the middle class of the fruits of their labors in order to dispense those fruits to others, and create a dependent underclass (the idealized, empowered proletariat). In exchange for the acquisition and consolidation of power, the “rulling classes” have institutionalized “legal plunder” not only in Western Europe but also here in the United States of America.

Frederic Bastiat, writing a half century earlier, foresaw and predicted this triumph of the State if unrestrained by The Law, the Natural Law which our American Founders crystallized as the rights to life, liberty, property, and the pursuit of occupation, health, and happiness.

I recommend Albert Jay Nock’s and Frederic Bastiat’s true gems of classic liberalism without any reservation for the popular reader and the initiates. But I reserve Oppenheimer’s The State only for those who already have some knowledge of political philosophy and are formally acquainted with the writings of Our Founders, as well as the instructive little book The Law by Frederic Bastiat, on the one hand, and Karl Marx’s The Communist Manifesto (1848) on the other. This is necessary to prevent the initiate from getting bogged down in the sociological and economic morass of uncertain political philosophy.

This article may be cited as: Faria MA. The State by Franz Oppenheimer. HaciendaPublishing.com, February 14, 2014. Available from: https://haciendapublishing.com/the-state-by-franz-oppenheimer/.