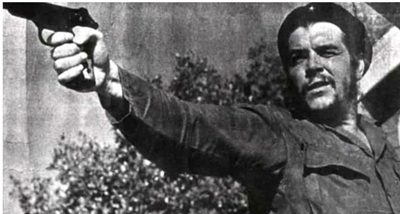 Che Guevara and Ernest Hemingway by Miguel A. Faria, MD

Following publication of his book, The Longest Romance: The Mainstream Media and Fidel Castro, Humberto Fontova gave an interview to The Daily Caller that was turned into an excellent article published on September 4, 2013. The article generated considerable attention, becoming an eye-opener, a veritable exposé on the embarrassing tidbits that came to light about Ernest Hemingway’s outlandish behavior following the Cuban Revolution. Hemingway’s reputation should be permanently stained, at least among independent thinkers and conservatives. The article attracted the attention of the esteemed editor of RealClearHistory, the late Samuel Chi, who was kind enough to send me the link so I could peruse the article. Let me quote from The Daily Caller:

“While Fontova writes about influential Cuban agents in the United States and how the mainstream media continues to suck up to the Castro brothers in his new book, perhaps his most shockingly lurid anecdote is of writer Ernest Hemingway, who lived in Cuba at the time of the Cuban Revolution. Hemingway hailed Castro’s revolution as ‘very pure and beautiful,’ Fontova said. ‘He was also a guest of honor at many of Che Guevara’s firing squad massacres. Hemingway loved to watch Che’s firing squads murder hundreds of Cubans. Hemingway would watch the massacres from a picnic chair while sipping Daiquiris.’ ”

Fontova’s source is a former journalist who worked for the late Paris Review editor George Plimpton, whose boss was invited and feted along with Hemingway on one such firing squad massacre and witness to the sanguinary soiree.

This took place soon after the Cuban Revolution at the Fortaleza de la Cabana fortress that was converted into a prison (photo, below) for enemies of the revolution, where its huge masonary walls from Spanish Colonial times became the firing squad walls and the courtyard became a killing field for the vengeful revolutionists.

“Several men who survived La Cabana prison recall a night when a 14-year-old boy was shoved into their holding cell. When asked what he did, he gasped that he had tried to defend his father from the firing squad, but was unsuccessful. Moments later, guards dragged the boy out of the cell, and Che Guevara himself ordered the boy to kneel down. The jailed men screamed “assassins!” and watched out of their cell window as Guevara took out his pistol, put the barrel to the back of the boy’s neck, and fired.” This extracted from “Ernesto Guevara: Butcher of La Cabana.”

It is indeed a disturbing article but the facts therein cited are consistent with what I know to be true. Hemingway enjoyed his Mojitos and Daiquiris while rubbing elbows with revolutionaries in the island paradise that the Cuban Revolution has since turned into a wasteland. Hemingway loved Fidel Castro as well as all left-wing revolutions, and the places he frequented in Cuba are communist shrines today.

It is a travesty that an intelligent person and great author such as Hemingway fell for tyrants like the Castro brothers and their sidekick Che Guevara. But unfortunately, it is true. Hemingway fell for Fidel, hook, line, and sinker just like the Colombian novelist Gabriel García Márquez did over the years.

Hemingway favored the communist side in the Spanish Civil War where 500,000 people perished. He went out of his way to misreport the war and advised John Dos Passos to do the same. Hemingway advised his fellow correspondent that if Dos Passos wanted his journalistic and novelistic work promoted by the print media and the publishing establishment he had better toe the communist line! Dos Passos refused.

So while both of them were initially men of the left, Hemingway prospered, while Dos Passos stalled! Some of the other tidbits come out of Hemingway’s own mouth, or rather, his pen. In his book, The Fifth Column: And Four Stories of the Spanish Civil War, Hemingway even confesses to crimes, such as turning in former friends to the Republican (communist) secret police. In fact, it was the reality of the civil war in Spain and communist treachery that turned Dos Passos — and many others, such as George Orwell — away from socialism and communism.

During the Spanish Civil War, there was systematic assassination of fellow Republicans, men of the left, such as Dos Passos’ friend, José Robles, and numerous others, including Andres Nin, who were accused of being Trotskyites by Stalin’s NKVD goon squad in Spain and executed. Such crimes by the Loyalists (Spanish communists in power) supported by the NKVD turned Dos Passos away from socialism and communism.

Robles’ execution, probably ordered by Stalin’s NKVD General, Alexander Orlov, caused a total rift between Hemingway and Dos Passos, who had been longtime friends and fellow travelers. Hemingway condoned the assassination, as “necessary in time of war,” while Dos Passos, embittered by the death of his friend, broke away from communism and began his remarkable odyssey to the political right. Dos Passos moved to the American Republican Party and supported Barry Goldwater in the 1964 U.S. presidential election.

I have touched upon the theme of betrayal and assassination of “ideological deviationists” by communists during civil wars and revolutions in previous articles and comments. Communists use assassination and purges of fellow revolutionaries in their quest for ideological purity, following the line Vladimir I. Lenin delineated as far back as 1917.

Returning to The Daily Caller article, an astute commenter who was not at all happy with Hemingway sipping Daiquiris and being entertained by Che while watching the Cuban firing squads, wrote sardonically but with clarity:

“Hemingway like all Leftists was an endlessly self-promoting cowardly narcissistic braggart of modest talent who bullied everyone around him. It is little wonder that when his time of terminal decline was upon him he used a shotgun to avoid the pain and indignity of death. Such a person would have no interest in the suffering of others because being near the power of life and death, and not be threatened by it because of your international status, is the ultimate Leftist aphrodisiac that made him appear to be actually alive.”

He has a point!

In the meantime, let’s return to the here and now as we ponder perhaps the most important election in the last 150 years looming within a few days on the political horizon. Consider the lessons of history — e.g., what happened during the French and Russian Revolutions, not to mention the Weimar Republic where a democratic process paved the way to power for Hitler and the National Socialist Party (the Nazis) in 1933. Isn’t it worthwhile to consider what could happen in our own USA, if Trump and the freedom party, the GOP, lose the election this November? Will we “intransigent” conservatives also be judged by the new revolutionists of the Democrat Party, egged on by the likes of Robert De Niro and Kathy Griffin, in the same manner that Che Guevara and Ernest Hemingway judged others? Think about it and vote.

1. One of my articles, “The Astounding Case of Soviet Defection Deception,“ about the defection of Stalin’s master spy, Alexander Orlov, and also republished by RealClearHistory, contains a lot of information about the Spanish Civil War and Stalin’s secret police operating on the Republican (Loyalist-communist) side during the war.

2. I wrote in more detail about the exterminated anarchists of Spain in the three-part series, “The Political Spectrum.” In particular, “Part III — The Extreme Right: Anarchism,” describes how the communists wiped out their fellow revolutionaries on the left, regardless of whether they were socialists or anarchists, once they took control of the movement and attained power.

This article may be cited as: Faria MA. Che Guevara and Ernest Hemingway. HaciendaPublishing.com, October 30, 2020. Available from: https://haciendapublishing.com/che-guevara-and-ernest-hemingway-by-miguel-a-faria-md/

1 thought on “Che Guevara and Ernest Hemingway by Miguel A. Faria, MD”