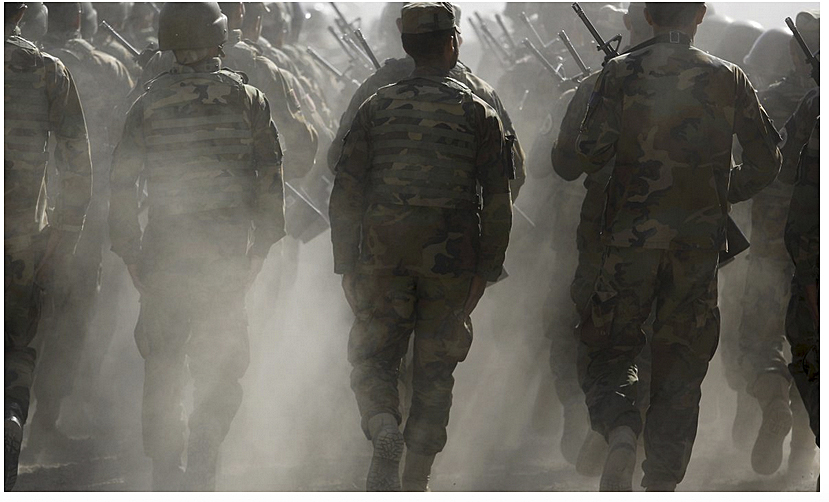 Will You Fight for Freedom? by Cliff Kincaid

The difference between Afghanistan and Vietnam is that the Muslims would not fight for freedom. The Vietnamese did and were betrayed. That’s the difference. Don’t forget it.  The real enemy is the Red Jihad.

Vietnam would be free today except for a Democratic-controlled Congress that decided otherwise. Lewis Fanning’s excellent book, Betrayal in Vietnam, notes that “. . .it was not the Hanoi communists who won the war, but rather the American Congress that lost it.” Fanning writes, “It was not until after the United States elections in the fall of 1974 that North Vietnamese field commanders received the go-ahead in their plans to conquer South Vietnam.

Going through the provisions of various bills offered by Democrats in Congress, he presents the case that “A Democratic caucus of the Congress of the United States, aided and abetted by a few liberal Republicans, cast the South Vietnamese people into Communist slavery.”

That left-wing caucus, Members of Congress for Peace through Law, decided that American military involvement would end, and dramatically reduced aid to the government of South Vietnam. Republican President Gerald Ford, who took power after Richard Nixon’s resignation, understood that Congress would not provide enough assistance to keep the country free of communism. Hundreds of thousands of “boat people” tried to escape the Hanoi communists who took power in Saigon while the communist Khmer Rouge took power in neighboring Cambodia, eliminating almost two million people.

The Members of Congress for Peace through Law eventually grew to became the Congressional Progressive Caucus, the largest group of congressional members within the Democratic Party. This faction is the subject of Trevor Loudon’s book, The Enemies Within: Communists, Socialists and Progressives in the US Congress, which is now being made into a major film.

Think about this as we consider Afghanistan.

“Together, with our NATO Allies and partners, we have trained and equipped over three hu- — nearly 300,000 current serving members of the military — of the Afghan National Security Force, and many beyond that who are no longer serving. Add to that, hundreds of thousands more Afghan National Defense and Security Forces trained over the last two decades. We provided our Afghan partners with all the tools — let me emphasize: all the tools, training, and equipment of any modern military. We provided advanced weaponry. And we’re going to continue to provide funding and equipment.  And we’ll ensure they have the capacity to maintain their air force.”

Asked about “some Vietnamese veterans” who “see echoes of their experience in this withdrawal in Afghanistan,” he was asked, “Do you see any parallels between this withdrawal and what happened in Vietnam, with some people feeling — “

Biden said, “None whatsoever. Zero. What you had is — you had entire brigades breaking through the gates of our embassy — six, if I’m not mistaken. The Taliban is not the south — the North Vietnamese army. They’re not — they’re not remotely comparable in terms of capability.  There’s going to be no circumstance where you see people being lifted off the roof of a embassy in the — of the United States from Afghanistan. It is not at all comparable.”

He’s wrong. His party betrayed freedom in Vietnam. The Vietnamese were prepared to fight for their freedom. The Muslims were not.

Here’s more of the exchange:

Question: Is a Taliban takeover of Afghanistan now inevitable?

Biden: Because you — the Afghan troops have 300,000 well-equipped — as well-equipped as any army in the world — and an air force against something like 75,000 Taliban. It is not inevitable.

Biden: You — is that a serious question?

Question: It is absolutely a serious question. Do you trust the Taliban?

Question: Do you trust handing over the country to the Taliban?

Biden: No, I do not trust the Taliban.

The Muslims had the arms and the training. They were not prepared to fight for freedom against the Red Jihad. Lesson learned, finally.

Our enemies are communism and Islam. Together, they are the Red Jihad.

America has to fight both.

This article may be cited as: Kincaid C. Will you fight for freedom? HaciendaPublishing.com, August 16, 2021. Available from: https://haciendapublishing.com/will-you-fight-for-freedom-by-cliff-kincaid/.

2 thoughts on “Will You Fight for Freedom? by Cliff Kincaid”