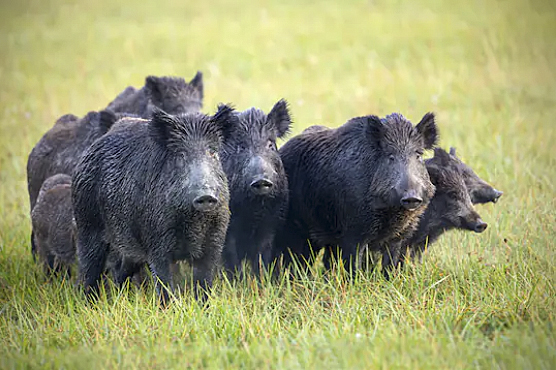 Perry, Georgia attorney Larry Walker penned an interesting article in the Telegraph (Macon) on wild hogs and described their increasing destruction of flora, fauna, and property — a scourge and a serious concern to citizens in more than 40 states. Moreover, the multiple stories about wild hogs rampaging the land and the recent woman killed in Texas by a sounder of wild boars exemplify this increasing problem.

Nevertheless, after citing disheartening statistics about wild hog damage, Walker further opines, “…trapping is difficult, if done properly, and shooting is not very effective.” I ask: Are there any challenging tasks or arduous sports worth pursuing that are not difficult?

Where there is a will there is a way. Moreover, Walker’s assertion is not entirely correct. While trapping feral hogs is vastly superior, hunting them is not impossible, and the sport is not devoid of value and excitement: The hog population can be culled, or at least the sounders can be forced out of valuable pasture and agricultural land and chased to more natural habitats in swamps and low-lying brush by hunting and trapping by private sportsmen (or farmers can invite hunters with dogs to do so). There is no need to bring more government agencies to do a job that we can do as private citizens. A story, that took place along the banks of the Ocmulgee River, “Whose bread I eat, his song I must sing,” told by the late Dr. J.G. McDaniel of Fulton County, illustrates the story, conveying meanings at several levels:

“Several months later he came back to the same store and asked for help to bring out the wild hogs…he had them all in a pen over in the swamp. Bewildered farmers, dubious hunters, and store-keepers all gathered in the heart of Horse-Shoe Bend to view the captive hogs. ‘It was all very simple, said the one-gallused man, ‘First I put some corn. For three weeks they would not eat it. Then some of the young grabbed an ear and ran off in the thicket. Soon they were all eating it; then I commenced building a pen around the corn, a little higher each day. When I noticed that they were all waiting for me to bring the corn and had stopped grubbing for acorns and roots. I built the trap door. Naturally,’ said the patient man, ‘they raised quite a ruckus when they seen they was trapped, but I can pen any animal on the face of this earth if I can jist get him to depend on me for a free-handout.’ ”

The story is instructive on several levels: Wild hogs like men can be trapped if they can be made dependent on a free-handout! And so it was that by baiting large sturdily constructed traps with corn, we trapped ferocious wild hogs at the farms of our friends in Taylor County, and ended there the deprivations of crops, sod and hay farms caused by these animals over the years. Other hunters nearby used dogs (we didn’t). The hogs have not come back in force for two years! But we are ready for them if they return! It is open season for feral hogs in Georgia year round.

As a result of the hog hunts, we have had sausages, pork chops, and ribs in our freezer — pork that was so “important to the Walker family” in previous generations. Farmers are frequently willing to allow hunters to hunt wild hogs on their property, and pork can also be donated to the needy. It is the most consumed meat in the world. (Wild hog is lower in fat than regular pork.) My friend and butcher, Ernest Thomas of Bolingbroke, Gerogia, does a magnificent job of preparing the meat with our favorite cuts. My freezer is depleted; not only have we consumed a lot of venison and pork in the last few years, but we have even taken some to my family in Miami.

Worth repeating: There is no need to bring any government agencies to do a job that we can do as private citizens. And let’s turn this problem into an opportunity, while protecting our property, the environment, and exploiting a natural resource that sorely needs exploiting!

Miguel A. Faria, M.D., is Associate Editor in Chief in socioeconomics, politics, medicine, and world affairs of Surgical Neurology International (SNI). This article is excerpted and edited from his newly release book, America, Guns, and Freedom: A Journey Into Politics and the Public Health & Gun Control Movements (2019).

This article originally appeared on The Truth About Guns (TTAG) on December 1, 2019. It is reposted here for the enjoyment of our readers at HaciendaPublishing.com. The photos contained in this article did not necessarily appear in the TTAG version.