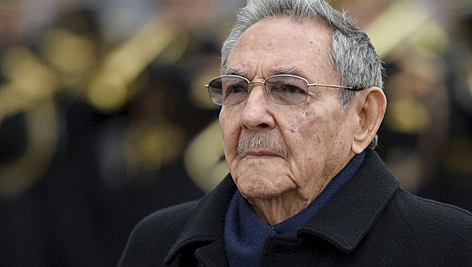 Who Is Raúl Castro? (Part II)

The Castro brothers’ hatred for the United States became immediately apparent upon gaining power in 1959. Fidel began making his long harangues against the United States, and the Cuban mobs so inspired began collectively composing such anti-American slogans as Cuba Si, Yanquis No! and Fidel seguro a los Yanquis dale duro! (“Fidel, for sure, hit the Yankees hard!”).

In the meantime, Raúl Castro and Ché Guevara were courting the Soviets. Fidel, at last, embraced Nikita Khrushchev at, of all places, the United Nations in New York! The Soviets were invited to visit Cuba and pluck the fruits of the Caribbean island paradise, still plentiful then — in exchange for Soviet arms and equipment.

The 21st Congress of the Soviet Party proclaimed that the USSR would surpass the United States in agricultural and industrial production. In fact, at a Polish Embassy reception as early as 1956, Soviet Premier Khrushchev proclaimed to the despised American capitalists: “Whether you like it or not, history is on our side. We shall bury you.” Thus, it was not surprising that the Russian peasant who was now the Soviet dictator, emboldened by the spectacular success of the Soviet rockets and the orbiting Sputnik, further prophesied to the American people on U.S. television, “Your grandchildren will live under communism.”

In January 1960 on Three Kings’ Day, Soviet Deputy Premier Anastas Mikoyan stepped off an Aeroflot jumbo jet in Cuba and gladly demonstrated in a three-week agricultural exhibition the Soviet achievements in agricultural and industrial production. Fidel, Raúl, and Ché were smitten with Soviet products, but the Cuban people or even sympathetic Cuban journalists, who until that time had been supportive of the revolution, were not impressed. Ordinary Cubans recognized Soviet and Eastern European products for what they were: shoddy products, markedly inferior to those they were accustomed to from the U.S.A. It must have been difficult for the Soviets to not recognize that in 1960 ordinary Cubans, the liborios, still had a higher standard of living than their communist counterparts in the U.S.S.R.

Meanwhile, U.S.-Cuba relations had become tense. By the mid-1960s, freedom of speech and freedom of the press had ended in Cuba — virtually with no protest raised by fellow journalists in the U.S!

On May 11, 1960, Diario de la Marina, a conservative daily, was shut down, and its chief editor, José Ignacio Rivero, had to flee for his life and seek asylum in the Peruvian Embassy. His newspaper had criticized Castro’s treaty with the Soviets. On May 13, 1960, the editors and journalists of Prensa Libre also went into exile. Revolutionary mobs demonstrated in front of the office of the Prensa Libre demanding that the editors and journalists be sent “to the firing squad wall” (¡Paredon, paredon¡). One by one all newspapers were shut down, even those that had initially supported the revolution. The communist Granma, the new voice of the Castro brothers, replaced all of them.

In the summer of 1960, Raúl Castro flew to the USSR to seek armaments for his Fuerzas Armadas Revolucionarias (FAR; “Revolutionary Armed Forces”). Khrushchev was impressed with Raúl’s communist devotion to the cause and made the fateful decision to go all out to defend the Cuban Revolution. The Castro brothers had delivered the beautiful Caribbean island into the Soviet camp.

At the same time, American companies were nationalized by the Cuban regime. During June 1960, the large hotels in Havana, including the Nacional and the Hilton, were nationalized (expropriated by the revolutionary government). On June 29-30, Texaco, Esso (Exxon), and Shell Oil were also nationalized. Cuba had not only seized the oil industry, but had also become totally subservient and dependent on Soviet oil.

By the end of October, Castro had also nationalized most of the remaining American companies, including Woolworth, General Electric, International Harvester, Sears and Roebuck, Remington Rand, Otis Elevator and the Coca-Cola distributor on the island.

Raúl Castro as head of the armed forces was getting ready for a confrontation with the U.S. using newly acquired Soviet arms. Fidel Castro boasted that if the Americans invaded the island they would suffer casualties exceeding those of Normandy or Okinawa! Furthermore, Raúl implemented mandatory, universal conscription (Servicio Militar Obligatorio) and sent military cadets to the Soviet Union for training.

Raúl was not only in charge of the organization of the military but also supervised military intelligence. The Interior Ministry (MININT) — run by dissolute men such as Ramiro Valdés and Manuel Piñeiro and unrestrained by constitutional protections of civil liberties or the rule of law — was very effective in thwarting political opposition and liquidating purported counterrevolutionaries and other “enemies of the revolution.”

By the time of the Bay of Pigs invasion of April 17-19, 1961, the Cuban military was well prepared to defeat an invasion force that didn’t have the total support and required commitment of the United States government. And when the awaited invasion came, the Castro brothers led the land forces that defeated the abandoned and betrayed Cuban exiles.

While Fidel had to tolerate the presence of the U.S. naval base in Guantanamo, Raúl Castro vituperated that it was “a cancer that needed to be extirpated.” And, the Soviets emboldened with “the first defeat of Yankee imperialism in America,” went ahead with the deployment of the Soviet missiles in Cuba in the summer and fall of 1962. The Cuban ambassador to the U.S.S.R., the former anticommunist Revolutionary Directorate (RD) leader, Faure Chomón, who had been sent there for penitence as well as for formal “reintegration into the revolution,” was brought back from the Soviet Union in March 1962 and made secretary of communication.

It was Raúl Castro who arranged that spring with Khrushchev for the bold and perilous move to have Soviet missiles deployed in Cuba resulting in the October Missile Crisis.

In the early 1970s when Raúl was promoted to first vice premier, he was also given the new military rank of general. Until that time, the highest revolutionary rank in the FAR had been major (comandante). “Egalitarianism” in the military had come to an end. Once again, there would be “aristocratic” colonels and generals in the Cuban army. As in other totalitarian societies, there would be two tiers of “comrades,” those who are less “equal” at the bottom and those who are “more equal than others,” largely in the communist/military class – the mayimbes, led by Raúl and topped by Fidel.

As a ranking member of the Secretariat and the Politburo of Cuba as well as the newly reformed Cuban Communist Party (CPC), Raúl was consolidating power behind his brother. He also led the reforms required by the Soviets for the institutionalization of the communist bureaucracy (Sovietization) and the establishment of the Cuban constitution of 1976, a document that borrowed heavily from its Soviet counterpart, the old Stalinist constitution. Raúl thus continued to enhance the confidence the Kremlin leadership had placed in him “as a politically reliable Cuban leader and administrator.”

After the collapse of the Iron Curtain in 1989 and the crumbling of the Soviet state in 1991, Raúl visited Red China and exchanged visits with Chinese military leaders for the re-establishment of cordial Cuban-Chinese relations. (At the time of the “Sino-Soviet split,” Fidel Castro had taken the side of the Soviets.)

Unbeknownst to most Americans, if not the rest of the world, Raúl Castro — along with the entire leadership of MININT and its repressive state security apparatus, José Abrantes (the then head of MININT), Manuel Piñeiro (Barba Roja, “Red Beard”), head of Cuban counterintelligence, and the present Minister of MININT, Abelardo Colomé Ibarra — were all named as co-conspirators for drug trafficking (cocaine) charges in a 1993 draft indictment issued by a federal court in South Florida. The details of the investigation and indictment were published by The Miami Herald, but incredibly, these charges were not widely publicized by the American media.

It was as a result of this serious U.S. ongoing investigation that Fidel Castro had pre-empted the process by executing Gen. Arnaldo Ochoa and other sacrificial lambs in 1989. Fidel also protected Raúl (and himself) in the process. Indeed, subsequent investigations by The Miami Herald in 1996 disclosed that drug trafficking charges led to Fidel himself. Be that as it may, U.S. Attorney General Janet Reno refused to indict either one of the Castro brothers, although the evidence was overwhelming.

One of the legal problems discussed at the time was that Fidel Castro as head of state might have sovereign immunity from any such indictment. I have nevertheless summarized the evidence against the Castro brothers for the reader with references and two appendices in my upcoming book, Cuba in Revolution — Escape From a Lost Paradise, that despite the subtitle is also a study of the Cuban Revolution, a revolution in which my parents participated.

Suffice to say that with Raúl Castro already named in a U.S. criminal indictment, were he to become Cuban head of state, things could take unexpected turns. All of this once again could surface, perhaps with the intensity it deserves, and throw a monkey wrench into the plans of those who want to normalize relations with a successor communist regime under the younger, equally criminal Castro. In fact, in 1999, an 8-ton cocaine shipment was intercepted in Cartagena, Colombia. Law enforcement officials traced the cargo to a Cuban government enterprise. Nothing in Cuba happens without the knowledge of the Castro brothers.

More recently, Martin Arostegui, writing for UPI, disclosed Cuban military and DGI connections with the Irish Republican Army (IRA) and the Marxist Revolutionary Armed Forces of Colombia (FARC), groups involved in terrorist acts and drug trafficking. Reportedly, Cuban personnel are training the FARC in “assembling bombs,” as well as “the installation of anti-aircraft missile batteries being assembled locally with imported radar and teleguided systems.” This could prove deadly for U.S. Blackhawk helicopters and C-47 phantom gunships patrolling the area in anti-drug operations in that country.

As to what will happen after Fidel is out of the picture — over the last several years, Raúl Castro has increasingly placed military officers in key positions in the Cuban Politburo, the CPC, and in other positions of power. It is believed that these men will remain loyal to him. They owe their positions of privilege to Raúl. Closeness to the younger Castro is important, not only because of the perks that go with those positions, but also because association with him offers protection against suspicion of disloyalty to or intrigue against the personal rule of the Maximum Leader.

MININT, which has been and remains in charge of surveillance (DGI; State Security) and counterintelligence, has already fallen under the direct control of the Ministry of the Armed Forces (MINFAR) and therefore under Raúl. MININT controls State-owned enterprises and factories that still operate in Cuba and the growing tourism industry, which also means that the hard cash (dollars) tourism facilities also come under the control of Raúl (Institute of Cuban and Cuban-American Studies, University of Miami, 2001). No doubt upon the death of Fidel, Raúl Castro and his close knit military will clamp down on the long dependent population and will try to retain political and economic control of the island.

Whether Raúl’s machinery of repression and his heretofore loyal military will allow him to retain control over the Cuban people, with whom he is not popular — and most importantly without the Maximum Leader — is another story.

Miguel A. Faria Jr., M.D., is editor-in-chief of the Medical Sentinel of the Association of American Physicians and Surgeons (AAPS), author of Vandals at the Gates of Medicine (1995) and Medical Warrior: Fighting Corporate Socialized Medicine (1997). He is also a contributor to NewsMax.com and a columnist for LaNuevaCuba.com. Advance copies of his book, Cuba in Revolution — Escape From a Lost Paradise, will be available in the fall 2001. Web site: https://HaciendaPublishing.com.

This article may be cited as: Faria MA. Who Is Raúl Castro? (Part II). HaciendaPublishing.com, August 22, 2001. Available from: https://haciendapublishing.com/who-is-raul-castro-part-ii/