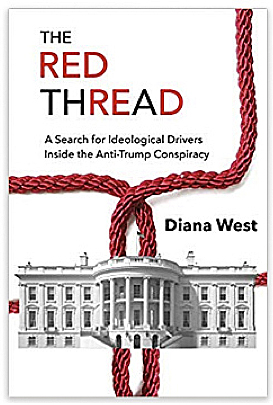 The Red Thread: A Search of Ideological Drivers Inside the Anti-Trump Conspiracy by Diana West is tremendously informative and an eye-opener that keeps you at the edge of your seat! The book explains and documents the origin and development of the anti-Trump conspiracy, as well as exposes the actual participants in the Deep State. This egregious conspiracy attempted to destroy the candidacy and then the presidency of a duly-elected American, Donald Trump — a patriotic American who was deemed a serious threat and enemy of the globalist and socialistic liberal establishment of the Deep State.

Diana West has done a stupendous job in unraveling this tortuous conspiracy, starting with the machinations of retired British MI6 agent (and “confirmed socialist”) Christopher Steele. The fake Trump-Russia (or Steele) dossier contained the fabricated the story of the Trump-Russia collusion that was bought and paid for by Hillary Clinton and the DNC via the Fusion GPS agency. Some characters are well-known, old players whom we have heard about before; others are lesser-known, public figures, but they all collaborated in one way or another as meticulously described by West with substantial documentation and exacting details.

We hear of Democrat operatives Sidney Blumenthal and Cody Shearer; Democrat fixer David Kramer and his academic brother Mark; “Russian expert for Fusion GPS” Nellie Ohr; Bill Browder, grandson of Earl Browder, head of the CPUSA and Soviet spy; and many others. The devious story of Bill Browder is very interesting and parallels that of treasonous Armand Hammer, another Soviet “unofficial contact” (agent of influence). Several of these characters pleaded the Fifth Amendment against self-incrimination rather than answer questions when summoned by Congress. We’ve heard a lot from the MSM about Trump associates — i.e.,  Republican transgressors purportedly involved in the fake story of Trump-Russia collusion — but we’ve heard very little about these shady Democrat operatives.

In addition, there were government figures, such as DOJ Bruce Ohr, husband of Nellie; Ambassador Derek Shearer, kin of Cody; former Secretary of State (earlier in 2004, candidate for U.S. president) John Kerry; “Fixer-in-Chief” at the State Department and Kerry associate, Jonathan Winer; former Director of the CIA, John Brennan; fired FBI Director, James Comey, etc. These are people who supposedly were appointed to look after the security of the United States; instead they betrayed the nation, placing their pro-communist, humanist-socialist and globalist views ahead of the nation, a nation they ostensibly served under the rule of law and the Constitution.

Diana West carefully looked into the background of these Democrat operatives, not neglecting John Brennan and James Comey. We find that in both of these devious characters, their earlier writings and careers betray their ideological motives. Ex-CIA Director Brennan admitted to voting in 1976 for Gus Hall, the boss of the CPUSA. Brennan did this as a calculated risk during a polygraph test. In his master’s thesis in college, “Red-Green” Brennan opined that socialism and distributive justice were better than capitalism and procedural justice. He also explicated that since “Democracy is a process, it may involve the violation of personal liberty and procedural justice.” So much for freedom and the rule of law.

In 1996 while in Riyadh, Brennan “may have been a target of a Saudi operation” that secretly converted him to Islam. Why do we not hear about these allegations from the MSM? Why was Brennan allowed to ascend the CIA ladder and be appointed by Obama to fill the CIA Directorship? Why wasn’t Brennan grilled for his pro-communist views during his polygraph tests? These are questions that West asks and answers, pointing out considerable evidence and persuasively explaining with rational arguments.

In the case of Comey, his chosen intellectual hero was Reinhold Niebuhr (1892-1971), an academician who was passed as an American Protestant theologian, but in reality was a secular humanist and avowed socialist who favored the communist USSR to capitalist America. His selection of mentor and hero reveals deep insights about the former FBI Director. Comey’s earlier writings in which he paraphrases and emulates Niebhur also helped explain how he reached his socialistic ideology. Comey wrote: “Justice is … enforced by power …  regulated by the principle of equality.”  Political decisions are not derived from faith or Christian politics, according to Niebuhr and Comey. Moreover, “the Christian in politics must be willing to transgress any purely Christian ethic. He must be willing to sin in the name of justice.”

In short for these progressive socialist elites, there is no fixed morality and the end justifies the means. They are willing to “sin” because in their unctuous judgment, they supersede the rule of law, the will of the American people — and the Republic they had swore to protect.

We also hear from less philosophic operatives, such as the journalist, friend of Bill [Clinton], and advisor to Hillary on the dossier, Strobe Talbott, who was implicated by Soviet defector Comrade J as an “unofficial contact” (another agent of influence) by the Soviets during the Cold War.

West follows the Red (“for communist not Republican”) thread of these individuals that goes deep from the Old Left to the New Left, as previously described by David Horowitz. The thread follows through with involvement of many of these pro-communist, progressive-socialist players with Soviet intelligence to present Democrat politics culminating with the Deep State conspiracy to destroy Trump, either nullify the election or carry out a coup to overthrow his presidency.

West argues with evidence proving that Putin and the Russians would have been better with Hillary rather than Trump as U.S. President. The whole Trump-Russia collusion was an egregious fabrication. The aid of the mainstream media (fake news), the progressive apologias of socialist academicians, and the Democrat politics of obstructionism and personal destruction, all enter the picture.

West notes and documents Democrat-Soviet collusion during the Cold War, not only by former Secretary of State John Kerry, but also by Senator Ted Kennedy. The MSM was aware of this but did not pursue it. After all, these were progressive Democrats! The media protected them and covered up for the Soviets as well. Soviet famines, the gulag, and systematic atrocities were suppressed. Instead fake news, such as that former KGB Chairman Yuri Andropov, then Soviet head of government, was a liberal politician who liked Jazz and other nonsense planted by the KGB, was reported ad nauseam.

The Steele dossier and the anti-Trump conspiracy were formulated in the same format as KGB disinformation, active measures fabricated for the destruction of candidate and later President Trump. The globalists and socialists insiders of the Deep State were hell-bent on stopping Donald Trump — an ardent anti-communist capitalist, nationalist, America-First outsider — at any cost. Again for these elitist, self-righteous, internationalists, the ends truly justify the means.

This book, flowing in clear, eloquent prose, will place current politics in perspective. Get it and read it!

This book review may be cited as: Faria MA. Unravelling the Russia Collusion Anti-Trump Conspiracy. HaciendaPublishing.com, July 1, 2019. Available from: https://haciendapublishing.com/unravelling-the-russia-collusion-anti-trump-conspiracy-by-miguel-a-faria-md/