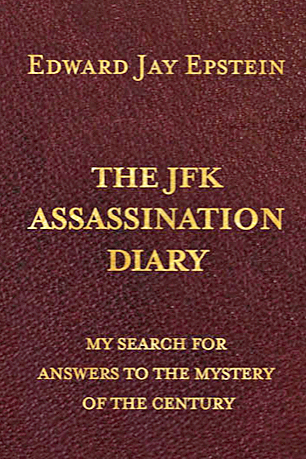 Unraveling the Mystery of the Century!

At ninety-eight pages, The JFK Assassination Diary: My Search For Answers to the Mystery of the Century by Edward Jay Epstein is a slim tome, and like most of Epstein’s books, it is worth the enthralling read and worth every bit of the price. The tome, clear and concise, is an essential narrative and puzzle-solver for all scholars of JFK and the avid readers of the disturbing assassination.

Researching his thesis in government as an undergraduate student, Epstein interviewed the who is who in the Warren Commission, including Gerald Ford, Arlen Specter, John McCloy, Allen Dulles, Chief Supreme Court Justice Warren’s senior assistants and staff lawyers. Epstein was given boxes of the original files of the Commission and FBI reports on the assassination to study and unraveled the workings of the Commission for his student thesis! This thesis he later published in a best selling book, Inquest: The Warren Commission and the Establishment of Truth (1964).

Epstein questioned Arlen Specter on the original autopsy findings (which had been filed away at the request of Robert Kennedy) as well as “the single bullet theory.” He interviewed and spent time with flamboyant New Orleans District Attorney, Jim Garrison. He befriended CIA Counterintelligence Chief James Jesus Angleton, and interviewed KGB defector, Yuri Nosenko. He publicly debated filmmaker Oliver Stone after his highly fictionalized and tendentious movie “JFK” was released in 1992.

Epstein’s research is impeccable and his astute conclusions are logical and largely correct. I will not reveal the content of his book and be a spoiler. Suffice to say, I continue to disagree, though, with Epstein as to his dismissal of the bona fides of Yuri Nosenko (whom I believe to be a genuine defector, as corroborated by the Mitrokhin Archives).(1) I also doubt the involvement of the KGB in a JFK assassination conspiracy, which is also not evident in the disclosures of the material found in the Mitrokhin Archives. I agree with Epstein’s view that Cuban involvement was a certainty, partially as Epstein describes, and as I have discussed more at length elsewhere.(2)(3)

I would be remiss if I did not mention some minor errors of facts and technical glitches in the text. For example, the pages in the text are not numbered and there are a few minor typesetting errors that do not detract from the superb narrative. As to errors of facts, on page 89, Epstein refers to Cubela as running the “Student Directorate, Castro’s youth propaganda organization.” This is a minor but significant error. Castro’s propaganda (political) organization was the Federation of University Students (i.e., Federación de Estudiantes Universitarios [FEU]), which Cubela headed as President. On the other hand, the Student Revolutionary Directorate (RD) was an underground and military organization that fought against the regime of Fulgencio Batista, a rival organization to Fidel Castro’s 26 of July Movement. Cubela was in fact also one of the leaders of the RD, a movement, which was obliterated by Fidel Castro after the triumph of the 26 of July movement. The leader of the RD was Faure Chomón.(4) On page 100, there is a typo error. Jack Children should be Jack Childs, who was the brother of Morris Childs, the hero of operation Solo, a major FBI counterintelligence operation that infiltrated the Kremlin and the Soviet leadership for decades.(5)

Nevertheless, I strongly recommend Epstein’s book with 5 stars and accolades, despite the caveat of my disagreements and the minor technical errors in the text. Read this tome for yourself and reach your own conclusions. This is an engaging little book containing some of the most accurate information available on the JFK assassination, and I categorically recommend it as a necessary instrument for deciphering and getting to the truth of the mystery of the century.

2. Faria MA. Cuban Espionage: The Saga of Florentino Aspillaga and the Assassination of JFK. HaciendaPublishing.com, December 13, 2012.

3) Faria MA. A review of Deception: The Invisible War Between the KGB & the CIA by Edward Jay Epstein, HaciendaPublishing.com, June 5, 2011.

Dr. Miguel A. Faria is the author of Cuba in Revolution: Escape from a Lost Paradise (2002) and of other books and numerous articles on politics and history, including “Stalin’s Mysterious Death” (2011), “The Political Spectrum — From the Extreme Right and Anarchism to the Extreme Left and Communism” (2011); “America, Guns and Freedom” (2012); ” Shooting Rampages, Mental Health and the Sensationalization of Violence” (2013); “Violence, Mental Illness, and the Brain — A Brief History of Psychosurgery” (2013), etc., all posted at his website HaciendaPublishing.com.

This article may be cited as: Faria MA. Unraveling the Mystery of the Century! HaciendaPublishing.com, October 29, 2013. Available from: https://haciendapublishing.com/unraveling-the-mystery-of-the-century/