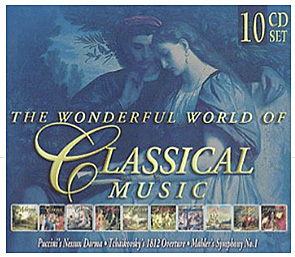 This collection is highly recommended as a Music Appreciation Course for the uninitiated as well as the connoisseur!

My favorites among this outstanding collection include:

12. Georg Fredrich Handel (1685-1759), German-born, British composer, celebrated for his oratorios, Master of Baroque. Selection: Messiah: For Unto Us a Child is Born (Great Choral Classics).

18. Frederic Chopin (1810-1849), Franco-Polish composer and pianist of the Romantic era. Settled in Paris, had a liaison with writer George Sand. Selection: Piano Sonata No. 2 in B minor Funeral March (Great Piano Classics).

24. Alfredo Catalani (1854-1893), Italian operatic composer. He is best known for his opera La Wally (1892), based on Germanic folklore or legend about a girl named Wally who steals a vulture’s egg, but later throws herself into an avalanche. The opera is rarely performed due to the difficulty of staging the death scene. Wilhelmenia Fernandez, the American soprano, more recently popularized the Aria from La Wally when she performed it in the 1981 cult movie Diva. Selection: La Wally: Aria, Act I (Great Opera Classics).

26. Richard Strauss (1864-1949), German composer/conductor (not to be confused with the line of Viennese musicians), who composed dramatic operas influenced by Wagner’s leitmotif concept. His work, Thus Spoke Zarathustra, has been consistently performed since its first performance in 1896. The opening fanfare, named “Sunrise” in the composer’s notes, became well-known after its use in Stanley Kubrick’s 1968 movie 2001: A Space Odyssey. Selection: Also Sprach Zarathustra (Great Nature Classics).

27. Igor Stravinsky (1882-1971), Russian-American composer, considered an important and one of the most influential composers of the 20th century. He was a student of Nikolai Rimsky-Korsakov. Selection: The Rite of Spring (Great Nature Classics).

Miguel A. Faria Jr. M.D. is a neurosurgeon and the author of the book, Cuba in Revolution: Escape from a Lost Paradise (2002), author of many articles on science, politics, medicine, and classical history.