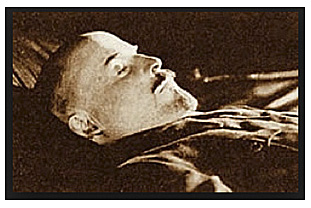 Body of an elderly man of normal build, adequately nourished. Small pigmented spots are noted on the interior aspect of the chest (acne). Obvious signs of cadaveric hypostasis are noticeable on the posterior aspect of the trunk and the extremities. A linear cicatrice 2 cm. in length is noted on the skin in the area of the anterior end of the clavicle. Another cicatrice having an irregular outline and measuring 2 x 1 cm. is located on the external surface of the left shoulder area. A round cicatrice about 1 cm. in diameter is found on the skin of the spine above the ridge of the scapula.

The outlines of the skeletal muscles are quite prominent.

In the left clavicle at the border of the lower and middle third there is a slight thickening of the bone (bone callus). Above this area in the posterior part of the deltoid muscle, a solid roundish body can be palpated. Upon incision of this area, a deformed bullet is found, enclosed in a capsule of connective tissue at the border between the subcutaneous fatty tissue and the deltoid muscle.

The cranial bones are unchanged. Upon removing the skull cover, a solid fusion of the dura mater with the inner surface of the cranium is noted, primarily along the course of the longitudinal sinus. The outer surface of the dura is dull, pale; pigmentation of a yellowish hue is noted in its left temporal and partly frontal area. The anterior part of the left hemisphere seems slightly collapsed in comparison with the corresponding part of the right hemisphere. The longitudinal sinus contains a small quantity of liquid blood. The internal surface of the dura mater is smooth, shiny-moist, easily separating from the underlying arachnoid membrane except in areas bordering the saggital suture where there are areas of fusion in the region of the Pacchionian granulations. The dura of the base of the brain is normal; the basal sinuses contain liquid blood.

Above the described areas of collapse, the arachnoid membrane is dull, whitish, in places yellowish.

In some areas overlying the fissures, including even some parts where there is no collapse, whitish regions are noted in which the arachnoid is hard and appears thickened upon section.

Vessels of the base of the brain. Both arteriae vertibrales, and also the arteria basilaris are thickened, do not collapse; their walls are hard, irregularly thickened, of a whitish and in places yellowish color. Upon section, their lumen is seen to be extremely narrowed in places down to the dimensions of a tiny slit. Identical changes are also found in branches of the arteries in question (aa. cerebri posteriores). The internal carotid arteries, and also the anterior cerebral arteries are similarly hardened, with an irregularly thickened wall and in spots greatly narrowed lumen. The left internal carotid artery in its intracranial course has a completely obliterated lumen and upon section appears merely as. a homogeneous solid whitish band. The left Sylvian (i.e. middle cerebral) artery is very thin, hardened, but upon section still shows a thin small slit.

Incision into the vermiform process of the cerebellar convolutions reveals no change of the brain tissue.

The fourth ventricle is free of any pathological contents.

Resection of the brain according to Flessing shows the brain ventricles, particularly on the left side, to be widened and containing a transparent fluid.

In the above noted areas of collapse of the brain there are areas of softening of the tissue, having a yellowish color and accompanied by formation of cyst-like structures filled with a turbid liquid. The areas of malacia involve the white as well as the gray brain matter. In other parts of the brain the tissue is moist, pale. The vascular plexus overlying the corpora quadrigemina is well irrigated with blood and there are signs of fresh hemorrhage in this area.

The positions of the organs of the abdominal cavity are regular with the exception of the cecum which lies somewhat higher than is the norm. The omentum and the mesentery are rich in fat. The diaphragm runs from the level of the fourth rib on the right hand side to the fourth intercostal space on the left. At the region of the pulmonary apex, fibrous synechiae are visible in the right pleura. The left pleura also forms synechiae with the diaphragm in its lower part. No pathological conditions are noted in the region of the heart sac; the mediastinum shows no particular changes.

Heart. Dimensions: transverse 11 cm.; longitudinal 9 cm.; thickness 7 cm. The epicardial surface is smooth and shiny; under the epicardium, mainly in the area of the left ventricle, spotty accumulations of fat are noted. The semilunar valves of the aorta are somewhat thickened at their bases. The mitral valve shows some thickenings at its margins and whitish opaque spots of the anterior cusp. The valves of the right half of the heart are without special changes. The interior of the ascending aorta shows a small number of convex yellowish plaques. The wall thickness of the left ventricle is 1¾ cm. and of the right one ½ cm. The coronary arteries gape upon section; their walls are very hard and thickened; their lumen definitely constricted.

The inner surface of the descending aorta and also the inner surfaces of the large arteries in general show numerous very prominent yellowish plaques, partly undergoing ulceration and calcification.

Lungs. The right lung is of the normal size and configuration; soft throughout, feels spongy. Resection of pulmonary tissue reveals it full of blood, a foamy liquid appears. The pulmonary apex shows a small retracted scar. The left lung is of the usual size and shape, its consistency being soft throughout. The posterior inferior part of the upper lobe has a scar reaching from the surface to a depth of 1 cm. into the pulmonary tissue. At the apex of the lung there is a small fibrous thickening of the pleura.

The spleen is slightly enlarged and moderately filled with blood upon section. The form and size of the liver are normal. The border of the left lobe is somewhat sharp. The surface is smooth. Section reveals a moderate degree of so-called grapiness. The gall bladder and the bile ducts reveal no special changes.

The stomach is empty. Its walls are collapsed. The mucosa shows clearly visible and normally arranged creases. No special conditions to be noted regarding the intestines.

The kidneys are of normal size. Their tissues are clearly identifiable and the substance of the cortex can be easily distinguished from the medullary part. The capsule comes off easily. The surface of the kidney is smooth with exception of some small areas where small depressions of the surface are present. The lumina of the renal arteries gape upon section.

The pancreas is of normal size. No special changes are noted following its section.

No special changes are noted in the pituitary gland.

The adrenals are somewhat smaller than the norm, especially the left one; the cortical substance is rich in stipples; the medulla is pigmented and brownish in color.

Anatomical Diagnosis: Generalized arteriosclerosis with pronounced degree of affection of the cerebral arteries.

Arteriosclerosis of the descending aorta.

Hypertrophy of the right ventricle of the heart.

Multiple foci of yellow cerebromalacia (based on vascular sclerosis) of the left cerebral hemisphere in a stage of resolution and of cystic change.

Fresh hemorrhage into the vascular plexus overlying the corpora quadrigemina.

Bone callus of the left clavicle.

Incapsulated bullet in the soft tissue of the left shoulder.

The basic disease of the deceased was disseminated vascular arteriosclerosis based on premature wearing out of the vessels (Abnutzungssklerose). The narrowing of the lumen of the cerebral arteries and the disturbances of the cerebral blood supply brought about focal softening of the brain tissue which can obtain all symptoms of the disease (paralysis, disturbance of speech). The immediate cause of death was: 1. The aggravation of the circulatory disturbance of the brain, and 2. Hemorrhage into the arachnoid pia mater in the area of the corpora quadrigemina.

We thank Adam Bogart, PhD., for emailing us a copy of this Autopsy Report of Vladimir Lenin.