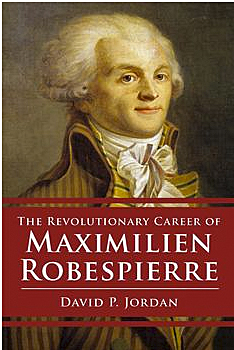 The Revolutionary Career of Maximilien Robespierre by David P. Jordan

This would have been one among the books Maximilien Robespierre would have chosen as an acceptable biography of himself, according him his rightful place in history. It is disturbing that so many readers of this book expressing their views in Amazon.com praise this idealized biography, once again reinterpreting the career of the authoritarian despot, who systematically guillotined those not sharing his sterile, cold-as-steel view of the world. Jordan’s version of Robespierre’s biography is a slanted, utopian vision of the world, according to L’Incorruptible, Robespierre, judging him by his writings rather than by his well known treacherous and sanguinary deeds and the toll they took on France from 1789-1794, particularly 1793-1794.

This is accomplished because Robespierre has been judged by the author by his lofty-sounding words and “noble” ideals expressed in his writings and his expressed intention to transform the ancien régime into the Republic of Virtue. The fact that Robespierre, the Incorruptible, the “Representative of the People,” helped demolish the ancien régime, through unspeakable violence only to bring misery and suffering and the blood and horror of the Reign of Terror, is not directly addressed.

Jordan writes: “I have not here attempted a biography of Robespierre but have written perhaps a species of biography, intellectual biography. I have laid heavy stress on his words” [Emphasis added; p. 10].

By this appraisal, Jordan admits he relies on Robespierre written words, rather than the tyrant’s personal influence or his overt or covert actions in the French Revolution. In doing so, he has written about an idealized French Revolution, which, like Plato’s Republic, is depicted the way it should have been, and not, like Aristotle observed, the world as it really was.

Jordan thus admits, “I have, as one must when dealing with evidence of a literary kind, taken Robespierre at his word.” So in effect, the Voice of Virtue of Robespierre’s collective works, Oeuvres complètes, speaks through the author to the reader — just the way Robespierre wanted to be heard down the ages of history, as opposed to what he actually did (i.e., commissions as well as omissions), intrigued, and plotted, as the center figure of the French Revolution. What Robespierre actually did or did not do is important because even though he presided over the Reign of Terror, Robespierre also contributed significantly in driving the Revolution down the path of radicalism and violence, in the preceding years (1789-1793).

Jordan, like many present day academicians with a penchant for collectivism and egalitarianism (with the concomitant and necessary authoritarianism that is necessary to achieve the “lofty” goals of a forced equality), is enamored of Robespierre, his regimented vision of the world and the leveling of society at any cost. This requires the adoption of Robespierre’s own intellectual views and the author’s revised vision of the French Revolution.

Jordan explains, “What we forget is that Robespierre was a man transformed, purified in the heat of the Revolution, which melted away the old flesh to expose the new spirit. His was a destiny rather than a life” (p. 8). Alas, it seems the author is trying to achieve the apotheosis of a tyrant!

Thus, Jordan’s book is a literary interpretation that disguises and fails to explain what actually took place; the author, intentionally or not, ends up attempting to ameliorate the excesses and justify Robespierre and his legacy of authoritarianism and terror.

Although Jordan hints at conceding a certain amount of hypocrisy on the part of Robespierre, he quickly dismisses it, as the narrative unfolds, usually quoting Robespierre’s own explanation for these shortcomings. Thus, he mentions that during the so-called “Reactionary” period – i.e., from the autumn of 1791 to the summer of 1792 – Robespierre was plagued by vacillations, “sophistry,” and “contradictions.” For example, late during this period, Robespierre called himself the Defender of the Constitution and so named his newspaper La Défenseur de la Constitution; this, in itself, could not be more hypocritical. The constitution that Robespierre was purportedly defending was the Constitution of 1791 that had established a Constitutional Monarchy for France in which the king possessed a powerful veto over the legislature (the Legislative Assembly). This constitution, which Robespierre purported to defend, he truly despised, only that he used it to wrap himself with it, seeking legalisms and protection. The fact is Robespierre, the “Representative of the People,” was cowed and trembling during the “Reactionary” period.

With the fall of Robespierre, it was the end of the Terror. Robespierre and his henchmen, his brother Augustin, St. Just, Couthon and Hanriot went to the guillotine. Le Bas shot himself to death at the Hôtel de Ville. The story is much better told by Otto Scot in Robespierre: The Voice of Reason (1974; the newer edition is Robespierre: The Fool as Revolutionary [1995]) and by Stanley Loomis, Paris in the Terror (1964; 1989). (See my reviews here in Amazon.com and order yourself copies.)

Jordan, to his credit, has written a literary biography in which he has obviously done a great deal of work. It is remarkable that he admitted, “I have asked the reader to view the French Revolution through the consciousness of Robespierre. I have presented Robespierre’s Revolution which is not identical with that as seen by others who lived it, nor with the Revolution now seen by historians” (p. 238).

Unfortunately, Jordan’s caveat is likely to be lost within the content of his book and his concerted defense of L’Incorruptible. There are much better books. Nevertheless, this book will add to the vast amount of knowledge helping us understand the mindset of those would-be leaders of men who, not content with running their own affairs, wish to impose their own warped, nightmarish vision of failed utopias, upon the rest of us. Thankfully, they don’t always succeed, at least for long!

This book review may be cited as: Faria MA. The Revolutionary Career of Maximilien Robespierre by David P. Jordan. Amazon.com, November 9, 2000. Available from: https://haciendapublishing.com/the-revolutionary-career-of-maximilien-robespierre-by-david-p-jordan/.