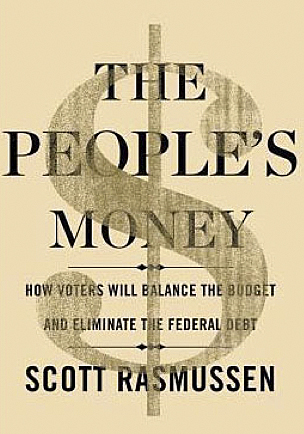 The People’s Money: How Voters Will Balance the Budget and Eliminate the Federal Debt by Scott W. Rasmussen

The Peoples’ Money: How Voters Will Balance the Budget and Eliminate the Federal Debt by Scott Rasmussen is a good book to initiate us as concerned citizens to the nuts and bolts of the process of getting the government budget balanced and the federal debt eliminated. The author, a well-known, respected pollster and regular commentator on the speaking circuit, has written about the pitiful state of American finances and proposes a blueprint about how we can correct the problems and restore fiscal sanity.

He postulates that the American people are willing to make the necessary compromises, reduce government spending, eliminate the federal deficit, etc.  — only that the politicians lie to us blaming Americans for not supporting the cuts in government spending that are necessary. I wish it was really that simple!

Mr. Rasmussen’s fiscal information, statistics, and dire warnings are right on target, but his prescription for curing the illness, and his rationale and methods for solving the economic ills of the nation are dangerous. One cannot run a government by the whim of the public opinion polls of the moment, or ignore the constitution because of fickle, momentary public opinion trends.

The American voters today are a shifty electorate, subject to the passions and whims of the moment and to media indoctrination, including the way pollsters themselves frame questions, which are leading voters down the path of feel-good socialism.

The truth, as SAT scores, academic studies, and even public opinion pollsters in the streets show, the average American is not as well-informed and civic-minded as he once was!

We need a limited government shackled by the chains of the constitution, as prescribed by Thomas Jefferson, whom the author quotes in a different context. And this needs to be done, along with restoration of strict constitutional governance, but we do not need to rule by momentary, shifty and trendy public opinion polls!

Despite the polling booth and changes in administrations, we are moving relentless toward reckless government spending and insolvency as Mr. Rasmussen enunciates, but we are also marching perilously down the path of socialism in America.

What Mr. Rasmussen also refrains from telling us in his book is that there is a serious disconnect between those who are footing the bills for most of the federal (and state) spending and those who are not. Moreover, those who are not contributing are an increasing number of voters, who do not care about balancing the budget or the federal deficit, but do have a personal stake in making sure the government continues to supply the benefits and services paid for by others. He does not even use the word “socialism,” and “wealth redistribution” is used only once in a neutral context.

This wealth redistribution percolates through all federal programs, such as Medicare, Medicaid, and a myriad of alphabet soup agencies, entitlements, and benefits paid by the 40% pulling the cart for the other 60% riding it.

So the fiscal problems today are of monumental proportions because those urging for more social spending are often those not paying the bills. And no matter how much is spent, those same citizens clamor for more. To make matters worse, the media, which have been shown to clearly possess a penchant for liberal bias by such authorities as William Rusher in the 1980s(1) and Bernard Goldberg(2,3) in the last few years, does not look the other way when the politicians try to curb government spending. Who has not heard the clamors — e.g., the politicians are going to “cut school lunches for the children,” or that the politicians plan to “cut Medicare benefits for the elderly”; well, you get my drift.

The truth is the politicians fear the liberal media, and they are very sensitive to public opinion as molded and presented by the media “progressives,” whether based on perception or reality.

And therein lies the problem: Voters who are increasingly spending other people’s money via the power of government and who are supported by the media, who believe they are correcting social or economic inequalities. Until this problem of egalitarianism and “fairness” is corrected, no economic blueprint will solve the fiscal irresponsibility dilemma in which we are mired.

As Sir Alex Fraser Tytler (University of Edinburgh [1714-1778]} succinctly stated: “A democracy cannot exist as a permanent form of government. It can only exist until the voters discover that they can vote themselves largess from the public treasury. From that moment on, the majority always votes for the candidate promising the most benefits from the public treasury, with the result that a democracy collapses over loose fiscal policy…always followed by a dictatorship.”

Dr. Miguel A. Faria is the author of Vandals at the Gates of Medicine- Historic Perspectives over the Battle for Health Care Reform (1994), a work still relevant in the coming battle over the Constitutionality of ObamaCare.

This article may be cited as: Faria MA. The People’s Money: How Voters Will Balance the Budget and Eliminate the Federal Debt by Scott W. Rasmussen. HaciendaPublishing.com, April 17, 2012. Available from: https://haciendapublishing.com/the-peoples-money-how-voters-will-balance-the-budget-and-eliminate-the-federal-debt-by-scott-w-rasmussen/.