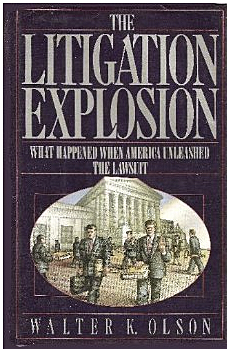 This book will remain timeless given the new legal assault onthe tobacco industry and the gun manufacturers. To find out the details and the evolution of legal concepts as it affects society, the reader should immerse himself in this momentous and extremely witty and well-written book by former Manhattan Institute scholar, Walter K. Olson. Olson’s book traces the history of legal theory and ethics, and discusses the impact of these evolutionary (and revolutionary) changes on modern American society. Olson wittily, yet scholarly, details the detrimental effects of the litigation explosion on society. The book should be prescribed reading for anyone who recognizes that he/she too may well be caught in the net of litigation – that is, everyone of us. Olson makes it amply clear that no one is immune from this societal disease and that a strong remedy is needed to cure this affliction.

As I predicted in an editorial in the April 1993 issue of the Journal of the Medical Association of Georgia, “On the Liability Crisis and the Glut of Litigators,” the rate of litigation and the adversarial legal system has intensified with the presidency of Bill Clinton, who we know has the trial lawyers as his greatest campaign finance supporters. The litigation industry’s proclivity to generate business for itself has been given a boost with his presidency, or rather co-presidency with attorney Hillary Clinton, and medical litigation has been no exception. Today, the attorney-litigators in collusion with an authoritarian public health establishment have targeted tobacco products and gun manufacturers, and have set their sights on HMOs and in the not-to-distant future, the fast food industry and nutritional products, particularly those that are considered more caloric than others and unhealthy by the coming new health police. These legal precedents are negating citizens their personal responsibility and their autonomy by blaming all their ills and afflictions on the acts of others, changing societal values in the process, and costing society billions of dollars.

This book does not deprecate honest attorneys who perform legal work necessary to adjudicate justice (e.g. criminal law), or who do the legal work necessary for the everyday business affairs of society: execute the required transactions in business deals, negotiate contracts, draw wills, carry out corporate work, serve in advisory or managerial capacity as general counsels and perform other non-trial work. What Mr. Olson denounces are those “wheel-of-fortune” and “lottery litigators” who aggressively participate in “the sue-for-profit litigation industry” for their own vested financial interest. As the author persuasively demonstrates these swashbuckling litigators are causing untold harm to the country and are unraveling the fabric of our nation.

For those who would drum up litigation, the “lawyers’ contingency fee is like the battery in the Energizer bunny.” It did not become legal in most of the United States until the 1960s. The practice is considered unethical and remains illegal in most other industrialized Western countries, because it is widely recognized that it encourages lawsuits and leads the plaintiff’s attorney to overplay their client’s hand in court.

Second, and most significantly, the author correctly asserts that we should strive nationally for adoption of the English Rule, which he calls “full two-way fee-shifting.” By this rule, the losing side in litigation pays the court costs and all attorney’s fees. This principle is not new. It is rooted firmly in Roman as well as Anglo-Saxon law. It has been and remains the rule in Great Britain, Canada, France, Germany, Switzerland, and other countries whose legal systems derive from the Anglo-Saxon common law and the Roman civil law models.

This full two-way fee-shifting is, according to Olson, “the single most important and constructive legal reform that ordinary citizens can fight for over the long term. It is memorably simple and fair, and not easily subverted once put into effect. It may also be the only reform that could render tolerable today’s procedural system of push-button litigation on demand, if that system is the one we want to keep….It’s the heavily contingent, unlikely-to-succeed wildcat litigators who would be discouraged by fee-shifting. And they are precisely the ones who should have been driven from the courthouse….By the horror with which they react to full fee-shifting, we will get a good idea of their sincerity.”

This book should be read by all Americans concerned with the litigation explosion, not only to protect our pocketbooks, but also to preserve our personal responsibilities which come with what remains of our individual liberties.

Miguel A. Faria, Jr., M.D., Editor-in-Chief of the Medical Sentinel of the Association of American Physicians and Surgeons (AAPS) and author of Medical Warrior: Fighting Corporate Socialized Medicine (1997).

This article may be cited as: Faria MA. The Litigation Explosion by Walter K. Olson. Amazon.com, December 6, 1999. Available from: https://haciendapublishing.com/the-litigation-explosion-by-walter-k-olson/.