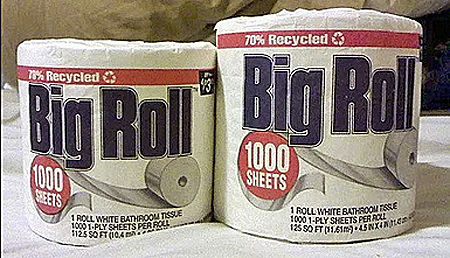 The decline and fall of toilet paper or How to assess a civilization by David C. Stolinsky, MD

There are many ways to assess a civilization. It all depends on your point of view. Some people believe we are advancing. These people point to a woman’s “freedom to choose,” more “rights” for those accused of crimes, and greater “tolerance.” Other people believe we are declining. These people point to nearly a million babies killed every year, up to the time of birth and sometimes even after. They point to increasing reluctance of the law-abiding to rely on the legal system. They point to widespread cheating in schools, in business, in government, and in relationships.

Those who believe we are declining point to the same events as those who believe we are advancing — they just see these events from a different perspective. But are there some ways to assess our civilization that most people might agree on? In an effort to find such methods, I adjourned to the bathroom, where I often do my best thinking, and came upon a possibility.

A few years ago, I’m not sure exactly when, rolls of toilet paper all shrank an inch or two in width. The rolls used to fit snugly into their holders, which had remained the same for many decades. But now the rolls fit loosely. At the same time, the paper grew thinner, so that if people weren’t careful, they discovered they were wiping themselves with their hand. This may be acceptable in some cultures, but not in ours. And this was “extra-soft, double-layered” tissue, not the bargain kind you find in public rest rooms and hotels.

The same shrinkage and thinning affected paper napkins, which used to cover a non-obese lap reasonably well. But now the paper napkins handed out in fast-food shops are barely large enough to cover the lap of a four-year-old, and certainly not thick enough to absorb the resulting spills.

But no matter how sloppy the burger or how drippy the yogurt, the clerk is instructed to hand out only one or two napkins per customer. I have now been reduced to placing a wad of paper napkins in my jacket pocket before I go to the mall. This habit also serves me well at gas stations, where often there are no paper towels to wipe my hands or clean the windshield. Obviously, the term “service station” no longer applies.

Yes, we all want to “save the planet.” But our planet is Earth, not some tiny planet inhabited by tiny beings. Smaller, thinner toilet paper and napkins will not be adequate for larger, fatter people. The lines are bound to cross. I believe they already have. Perhaps we will have to go about our job of “saving the planet” with our pants soiled, both inside and out. Whether or not we succeed in “saving the planet,” we are succeeding in losing our dignity, assuming we had any in the first place.

Inflation? We don’t have no stinkin’ inflation! See? The price per roll is unchanged.

Throughout most of American history, there were more doctors than lawyers. But in the early 1970s the lines crossed, and now there are considerably more lawyers than doctors. The next time you or a loved one needs a doctor, think about that. Often it’s easier to find a lawyer to sue the doctor than to find the doctor.

A basic law of economics, and of human nature in general, is that you get more of what you pay more for. But this law is subject to a proviso — the need for a particular occupation may be partly self-generated. There are only a few more doctors per capita now than in 1900. On one hand, doctors can do much more in the way of diagnostic tests and treatments. Medicine and surgery have advanced greatly, as reflected in a greatly increased life expectancy —especially in much lower infant mortality.

On the other hand, as people become healthier, they need fewer doctors. Hospital stays are much less frequent and much shorter than they were only a few years ago. Operations that used to require a week of hospitalization now are done on outpatients. However, short of intentionally spreading diseases or developing new plastic-surgery procedures, doctors can do little to increase demand for their services.

The reverse is true for lawyers. They can increase demand almost indefinitely. People used to do business for decades on a handshake. Now they need a lawyer to draw up a contract, which must be reviewed by the other party’s lawyer before anyone signs. People used to get married for life. Now lawyers make work for themselves with prenuptial agreements (and how to break them), divorces (and how to complicate them), child-custody disputes (and how to embitter them), and alimony and child-support demands (and how to increase them).

People used to accept that life has risks. Now they sue when anything goes wrong, or even when it doesn’t. And all these suits also require lawyers on the other side, as well as lawyers working for the insurance companies, not to mention lawyers to advise businesses how to avoid being sued by other lawyers.

All these suits add to the cost of every good and service we purchase, but no end is in sight. Laws enabling more lawsuits are made by legislators, most of whom are (surprise!) lawyers. The economist John Maynard Keynes once remarked that everyone can’t make a living by taking in everyone else’s laundry. It is equally true that everyone can’t make a living by suing everyone else. We no longer take in laundry, but if the number of lawyers continues to increase, we may still prove Keynes right by suing ourselves into poverty. America has the highest number of lawyers per capita of any nation. Is this a source of pride?

Newspapers and TV overflow with ads for attorneys:

Ads such as this, and doctors’ ads of a similar type, are what used to be expected of used-car dealers, not professionals. But the distinction between a business and a profession has become increasingly blurred. The meaning of a “calling” has been lost entirely. Ask a college student to define “calling,” and you will probably hear, “It’s what you do on the phone.”

Advertising by lawyers and doctors used to be banned by professional codes of ethics. But the courts threw out these bans, claiming that advertising would bring down costs. On the contrary, the costs of legal and medical services rose steeply, but the courts didn’t notice. Judges order something done in hopes of achieving a result, but when the result doesn’t materialize, the judges never reverse their rulings. They just go on to issue more rulings on other subjects of which they know little or nothing.

Judges fit perfectly the definition of an expert: someone who is often wrong but never in doubt. They represent the acme (or is it the acne) of the legal profession, giving orders on life-and-death matters to doctors, engineers, police officials, generals — and even the president. A judge may order a doctor how to treat (or in the case of Terri Schiavo, not to treat) a patient, and the next day order the president how to handle terrorists taken prisoner in the course of an overseas war. If there is a better example of hubris, I have yet to hear of it.

The lines cross — lawyers versus doctors, and fatter behinds versus smaller tissues. Time passes. Things change, not always for the better. There may be more scholarly or scientific methods to assess which way we are heading, but these two indices are quite revealing, don’t you think?

This article may be cited as: Stolinsky DC. The decline and fall of toilet paper or How to assess a civilization. HaciendaPublishing.com, January 7, 2016. Available from: https://haciendapublishing.com/the-decline-and-fall-of-toilet-paper-or-how-to-assess-a-civilization-by-david-c-stolinsky-md/.