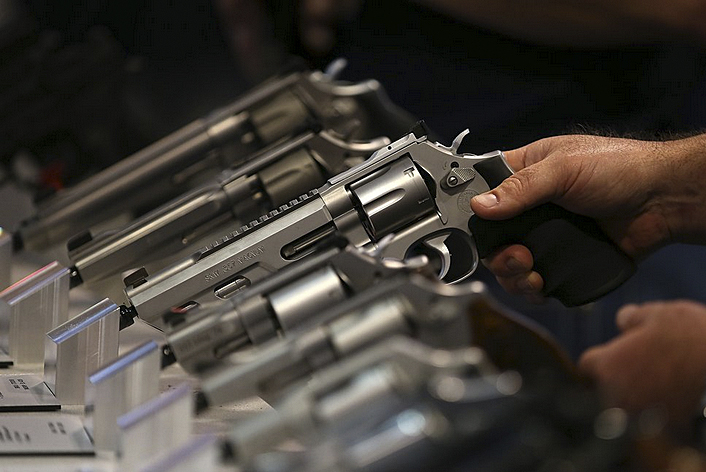 “There is a worrying trend in academic medicine which equates statistics with science, and sophistication in quantitative procedure with research excellence. The corollary of this trend is a tendency to look for answers to medical problems from people with expertise in mathematical manipulation and information technology, rather than from people with an understanding of disease and its causes.

“Epidemiology [is a] main culprit, because statistical malpractice typically occurs when complex analytical techniques are combined with large data sets. The mystique of mathematics blended with the bewildering intricacies of big numbers makes a potent cocktail. …”
­ Bruce G. Charlton, M.D.
University of Newcastle upon Tyne, 1996

You already know about AGS using the 9-11 tragedy to push its gun control agenda using the disingenuous cliché of “closing the gun show loophole.”(1)

Needless to say, AGS continues to neglect the fact that the government’s National Institute of Justice 1997 study “Homicide in Eight U.S. Cities” has shown that less than 2 percent of criminals obtain their illegally-possessed firearms from gun shows.(2,3)

Moreover, AGS has claimed it has found a link between terrorism and gun shows. The link has been shown to be fully immersed in deception, used, once again, to exploit the 9-11 tragedy to further push its gun control agenda.

The National Rifle Association (NRA) has correctly tagged AGS “an anti-gun lobbying group with no members, no gun safety programs, and now, no credibility.(4)

Enters the VPC, citing a Harvard School of Public Health study published in the February 2002 issue of the Journal of Trauma.(5) According to the VPC’s interpretation of that study, “The elevated rate of violent death among children in high gun ownership states cannot be explained by differences in state levels of poverty, education, or urbanization.”(6)

The authors of the study did not put it quite so bluntly; they knew better. Yet, according to the abstract of the study, they assert:

“A statistically significant association exists between gun availability and the rates of unintentional firearm deaths, homicides, and suicides. The elevated rates of suicide and homicide among children living in states with more guns is not entirely explained by a state’s poverty, education, or urbanization and is driven by lethal firearm violence, not by lethal nonfirearm violence.”(5)

Former U.S. president Bill Clinton once rhetorically explained that no one could prove that he had ever established administration policy based “solely” on the basis of campaign contributions, although in the case of Red China, the communist Chinese got their share of high-tech, strategic, missile-launching technology to pose a new threat to the U.S.

In the authors’ abstract, the words “not entirely” become the key to understanding the pre-ordained drift of their gun control agenda and the expected, result-oriented conclusions. The published study, indeed, is the typical, hackneyed public health, result-oriented gun research repeatedly published in the medical literature claiming that “gun availability is responsible for firearm violence.”

Thus, perhaps, we should analyze further the meaning of the words “not entirely.” What follows is a preliminary critique of the study while the primary, raw data is requested from the authors for further analysis.

According to the study, the five states with the highest gun ownership ­ Louisiana, Alabama, Mississippi, Arkansas and West Virginia ­ were more likely to have children dying from unintentional firearm injury (gun accidents), suicide (with or without firearms) and homicide than children in the five states with the lowest levels of gun ownership ­ Hawaii, Massachusetts, Rhode Island, New Jersey and Delaware.

In fact, the whole study revolves around using the phraseology “not entirely” to exclude the much more important reasons for violence with or without firearms: the levels of poverty and education, not to mention the related cultural factors and the utter breakdown of the family in those states by welfare and other government policies.(7)

I will explain, but before I do so, allow me to expound on two themes revolving around the subject of this study and make a couple of observations ­ observations that were overlooked by the public health researchers and their consorts at the VPC.

Three of the most notable mass shootings of the last several years occurred in the aforementioned states. Two of them, although they were adult, workplace shootings, occurred in Hawaii and Massachusetts, two of the states with draconian gun control laws and less “availability of firearms.”

Likewise, several mass shootings, adult workplace and children school incidents, have taken place in California, despite the stringent gun control laws and the supposedly less “availability of firearms” in that state.

The Xerox workplace incident in Honolulu, Hawaii (Nov. 2, 1999), the San Diego, Calif., Santana School shooting (March 5, 2001) and the Wakefield, Mass., incident of Dec. 26, 2000, all took place in states with very restrictive gun control laws, where guns shall have been less “available.”

School shootings, of course, can take place in states where firearms are more available to law-abiding citizens. And when they do, armed, law-abiding Americans can respond and stop the shooting before more innocent victims are robbed of their lives.

This was the case in 1998 in Pearl, Miss., a state cited in the study, when a schoolteacher used his firearm to stop a school shooting by a student. Lives were thus saved. More recently, in Virginia, two law school students overpowered and subdued a gunman using their own weapons.

The point is that, as usual, the public health researchers ignored the beneficial aspects of gun ownership and concentrated only in obtaining supporting evidence for their long-known thesis that firearm availability is responsible for violence in our society.

The fact is that only the law-abiding obey the law, criminals do not. When the government passes restrictive gun laws, those laws interfere in the lives of law-abiding citizens. Yet they do not stop criminals (or the mentally deranged) bent on breaking them.

While neither state waiting periods nor the federal Brady Law has been associated with a reduction in crime rates, adopting concealed carry gun laws cut death rates from public, multiple shootings (e.g., those that took place in schools in San Diego, Pearl, Miss., and Littleton, Colo.) by an amazing 69 percent, according to Prof. John Lott, formerly of Yale University.

Another observation virtually ignored by the authors of the study, as well as their promoters at the VPC, is the effect of television and media violence on juvenile delinquency.

It should be of interest to the reader to learn that some of the most important, breakthrough research papers on this topic first appeared in the 1970s and 1980s. The pioneering research was conducted and the paper written by Dr. Brandon Centerwall of the University of Washington School of Public Health.

Dr. Centerwall’s studies found that homicide rates in Canada were not related to easy gun availability by ordinary citizens, as he had expected, but to criminal behavior associated with watching television.

Moreover, Dr. Centerwall noted that up to half of all homicides, rapes and violent assaults in the U.S. were directly attributed to violence on television. And that was when violence on TV was nothing compared to the rampant and graphic violence depicted today in the movies and on TV.

Moreover, Dr. Centerwall showed with elegant data that reducing gun availability did not reduce Canadian homicides. Homicide rates in Vancouver, for example, were lower before the gun control laws were passed in Canada, and in fact rose after the laws were passed. The Vancouver homicide rate increased 25 percent after the institution of the 1977 Canadian gun laws.

This valuable research, though, was not made widely available and was virtually consigned to the “memory hole” of the public health establishment. Fortunately, Dr. Centerwall ‘s research pointing to the effects of television violence affecting homicide rates has been made available.(8)

In the summer of 2000, the media, including medical journalists, focused their attention on the associations of violence in television, music, video games and movies to violent behavior in children and adolescents.

To this end, a consensus statement of experts released on July 26 and sponsored by the AMA and other medical groups proclaimed, “At this time, well over 1,000 studies ­ including reports from the surgeon general’s office, the National Institute of Mental Health and numerous studies conducted by leading figures within our medical and public health organizations ­ point overwhelmingly to a causal connection between media violence and aggressive behavior in some children.”

Moreover, the report continued, “Its effects are measurable and long-lasting … prolonged viewing of media violence can lead to emotional desensitization toward violence in real life.”(8)

Why is all this background information being discussed about television violence and crime ­ virtually, life imitating art? Because, interestingly enough, the authors of the Journal of Trauma study ignored relevant and important data impacting directly on their research.

As clearly shown in this table compiled from government statistics (1994), it turns out that, among other factors, students in the “high levels of juvenile violence” states not only watch more television (24.2 percent) than those in the “low levels of juvenile violence” states (19.8 percent) but also do “less reading on their own time almost every day (39.6 percent vs. 44.2 percent).”(9)

We will be looking at the factors that Miller et al. claim were “not entirely” responsible for the high rates of unintentional firearm injury, homicide, suicide and overall violence in the mostly southern states. Incidentally, rather than using the biased, VPC shibboleths “highest” or “lowest gun ownership states,” I have used the more objective terminology, “high” and “low levels of juvenile violence” states, for the purpose of this critique.

On Feb. 28, 2002, I wrote Dr. Matthew Miller, the lead author of the study published in the Journal of Trauma, and requested that he kindly supply me with the primary, raw data which he and his associates used in reaching their conclusions.(10)

As of the time of this submission, March 11, 2002, I had not received an answer to my request. Hopefully, I will conclude with Part II of this critical article when I have had a chance to fully analyze that data. Stay tuned!

Miguel A. Faria Jr., M.D., is editor in chief of the Medical Sentinel of the Association of American Physicians and Surgeons and author of Cuba in Revolution ­Escape From a Lost Paradise (2002; https://HaciendaPublishing.com).

This article may be cited as: Faria MA. Statistical Malpractice —­ ‘Firearm Availability’ and Violence (Part I): Politics or Science? Hacienda Publishing. March 12, 2002. Available from: https://haciendapublishing.com/statistical-malpractice-firearm-availability-and-violence-part-i-politics-or-science/