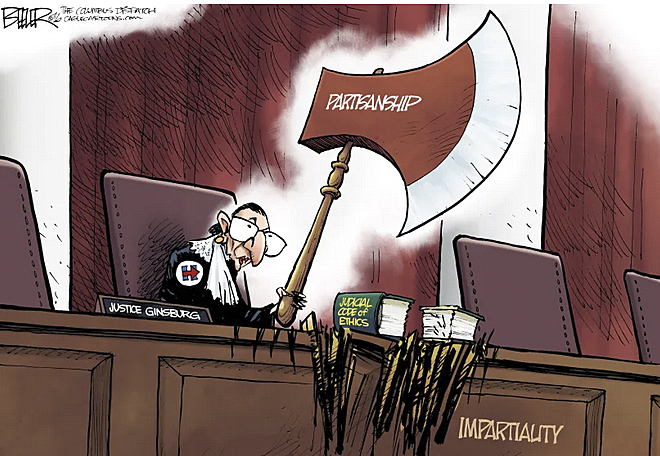 Shame on you Justice Ginsburg — Tender your resignation now!

It is bad enough for Supreme Court Justices to throw political shibboleths in private conversations or even in speeches on the lecture circuit, but it is even more egregious when they show their political bias openly in public statements to the sensationalist media and immerse themselves in disgraceful political controversies. Justice Ruth Bader Ginsburg has done just that and generated a shameful political scandal of behemoth proportions.

Justices are supposed to be above politics and political scandals, and, like Caesar’s wife, above suspicion, when it comes to political prejudices. This past Monday, Justice Ginsburg told CNN that Donald Trump “is a faker. He has no consistency about him. He says whatever comes into his head at the moment. He really has an ego.”

And this is not the first time that Justice Ginsburg had made outlandish and improper statements to the press. In a 2012 interview in Egypt on Al Hayak television, Ginsburg advised the Egyptians: “ I would not look to the U.S. Constitution, if I were drafting a constitution as a model.”  Instead she advised the Post-Arab Spring constitutionalists that they should look at South Africa “that embraces basic human rights.”

The BBC, one of the first news media to report the brewing scandal, called it a “political row,” and reported Donald Trump’s call for her resignation: “Justice Ginsburg…has embarrassed all by making very dumb political statements about me. Her mind is shot— resign!”

The issue of the need for public knowledge of the status of health and disease came up after the unexpected and sudden death of Justice Antonin Scalia on February 13, 2016. Perhaps, we should also look at the issue of advanced age and infirmity. Justice Anthony Kennedy will be 80 in July and Justice Stephen Breyer will turn 78 in August. Justice Ginsburg at age 83 is not only the oldest Justice in the Supreme Court, but she has suffered numerous serious illnesses, including colon and pancreatic cancer, anemia, and coronary artery disease that may have gradually come to affect her stamina and judgment. The Constitution (Article III, Section 1) says only, “Judges, both of the Supreme Court and the inferior courts, should hold their offices during good behaviour.” Should we consider amending the Constitution to place a limit on age and serious illnesses, considering the inappropriate remarks of Justice Ginsburg, her age and infirmities?

Earlier today Justice Ginsburg apologized for calling Trump a “faker,” but an apology is not enough. Most offensive of all statements has been her threat to leave the country, which compounded with her other political attacks, as well as her indirect defamation of the U.S. Constitution, a constitution she is sworn to judicially uphold, amounts to a disgrace.

Indeed, for a Justice of the U.S. Supreme Court, who is appointed to serve the nation without personal or political prejudices, she has revealed poor judgment as well as political bias unbecoming a federal judge. In fact, she has gone beyond the limits of decency and insulted national pride, when she further stated that she would move to New Zealand if Trump were elected to the White House!

Imagine that, a Supreme Court Justice elected for life to serve the nation, threatening to leave the country and presumably abandon her post, if a particular candidate, a federal Executive not of her liking, in this case Trump, is chosen president by the American people!

Assuming Donald Trump were to be elected president and she refused to resign — is Justice Ginsburg going to recuse herself in the interest of propriety, not to mention blind justice, from ruling on the legality and constitutionality of executive decisions and even legislative disputes involving the President of the United States? And if not, would it not be against the interest of justice if she did not do so?

It’s one thing for celebrities, such as Alec Baldwin, Cher, and Whoopi Goldberg, volatile but shallow entertainers, to threaten to leave the country if a particular candidate is elected, but it is quite another for a U.S. Supreme Court Justice to do so! This is not a matter for impeachment. This is a matter for Justice Ginsburg doing what is right to make amends for her audacity; she should step down voluntarily and resign from the Supreme Court to preserve what remains of her tainted judicial legacy.

Dr. Miguel A. Faria is a retired neurosurgeon and the author of Cuba in Revolution: Escape from a Lost Paradise. His website is HaciendaPublishing.com.

This article may be cited as: Faria MA. Shame on you Justice Ginsburg — Tender your resignation now! Haciendapub.com, July 14, 2016. Available from: https://haciendapublishing.com/shame-on-you-justice-ginsburg–tender-your-resignation-now/

Shortened versions of this article were also published in The Macon Telegraph July 13, and on GOPUSA.com on July 14, 2016.