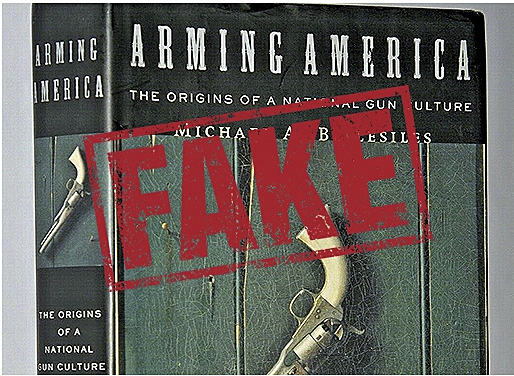 Revising American History for the Sake of “Gun Control” by Miguel A. Faria, MD

Like it or not — and many on the leftward side of the political spectrum don’t — firearms and civilian gun ownership have been part of our history and culture since before the nation’s founding and have become as American as mom and apple pie. May it ever remain so for lawful citizens. Not that my assertion based on historical reality would be accepted by many undaunted public health researchers and others dedicated to civilian disarmament.

The foes of civilian firearm ownership have a long and sordid record of revising history to fit their anti-gun narratives.

One researcher, an Emory University professor and Bancroft Prize winner, Michael A. Bellesiles, faked historical data to “prove” in his now discredited book Arming America: The Origins of a Natural Gun Culture that widespread gun ownership in early America was really a fiction.

Bellesiles contended that guns were, in fact, uncommon in the civilian population during the colonial and early periods of the Republic. Consequently, most Americans weren’t proficient with guns.

Bellesiles argued, citing non-existent probate court records, that widespread firearm use by the civilian population occurred only after the Civil War and that was only because the mass production of firearms had lowered to cost in owning one.

Only one of Bellesiles’ contentions was correct; that mass production decreased the cost of firearms while increasing their quality and accuracy. The rest of his argument was fabricated mendacity. His conclusions were wishful thinking, tailor-made for the liberal intelligentsia who opposed civilian gun ownership and received his book with great fanfare, and enthusiastically supported the great revelation he produced.

Yet Bellesiles’ conclusions, which contradicted well-known facts of American history, were preposterous for anyone with even a modicum of historical knowledge. How could early Americans survive the wilderness without possessing firearms and not be proficient in their use? How could colonists on the frontier, subject to Indian raids, protect their families? How could the colonial militia be ready at a moment’s notice not only to repel Indian raids but also to join with the British army in fighting in the French and Indian War (1756-1763), as Colonel George Washington and his militia did?

Most astounding of all, how could the celebrated event in American history we now refer to as Patriot’s Day (April 19, 1775) have taken place without the availability and familiarity with firearms? How could the minutemen, summoned by Paul Revere in his famous ride, assemble so quickly and with their muskets to fire “the shot heard around the world”? Why would American patriots prevent the British army’s attempt to disarm them and seize the arm depots at Concord, while passing by Lexington in the colony of Massachusetts? How could they have harassed the Redcoats all the way back to Boston if they were unarmed?

Bellesiles’ preposterous attempt at historical revisionism was truly audacious. Only an anti-gun “scholar” with a supreme capacity for arrogance and hubris would have even attempted this kind of fraud, but such dishonesty was only an illogical extension of the politicized “research“ that we have been exposing all along.

So, it didn’t take long for scholars to prove that Bellesiles’ “reseach” was fraudulent and his conclusions fabricated. His book a bag of lies conceived to reach the preordained conclusions that the American gun culture was actually a relatively new phenomenon, the result of a tragic civil war and an overabundance of cheap mass-produced weapons.

Bellesiles’ mendacity cost him his reputation, his coveted Bancroft Prize, and his position at Emory University, which is sadly also the alma mater for my post-doctoral neurosurgical training.

Foes of firearm ownership and the right to keep and bear arms lie often when the topic is guns. What they don’t know, they make up, whether in the media, popular culture, or academia. That’s how far the common denominator has fallen — in academics, entertainment, and in politics.

Miguel A. Faria, Jr, MD is a retired professor of Neurosurgery and  Medical History at Mercer University School of Medicine. He founded Hacienda Publishing and is Associate Editor in Chief in Neuropsychiatry and World Affairs of Surgical Neurology International. He served on the CDC’s Injury Research Grant Review Committee. This article is excerpted, updated, and edited from his book, America, Guns, and Freedom: A Journey Into Politics and the Public Health & Gun Control Movements (2019).

This article was also published on TheTruthAboutGuns.com on February 20, 2022 with the title of “The Anti-Gun Left Never Lets History Get in the Way of Its Narrative.“

This article may be cited as: Faria MA. Revising American History for the Sake of “Gun Control.” HaciendaPublishing.com, February 20, 2022. Available from: https://haciendapublishing.com/revising-american-history-for-the-sake-of-gun-control-by-miguel-a-faria-md/.