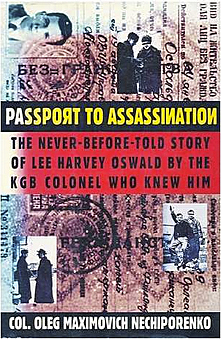 Passport to Assassination: The Never-Before-Told Story of Lee Harvey Oswald by the KGB Colonel Who Knew Him

Passport to Assassination: The Never-Before-Told Story of Lee Harvey Oswald by the KGB Colonel Who Knew Him by Oleg Nechiporenko is a disappointing book for an intriguing subject!

This is not one of the most ground-breaking books on Lee Harvey Oswald and the Kennedy assassination. In fact this is a revised book review because my orginal written several years ago was excessively harsh. In fact, another reviewer,  Mr. Hilliard of Toronto, Canada, at the time also wrote a critical review that appeared in Amazon: “Nechiporenko’s book is tedious, dull, and does not reveal anything that we do not already know in the ‘facts’ department.” This is still largely true.

Usually books by former spies reveal information of historical or intelligence interest. This book by an ex-KGB officer does not. The first part of his book about “facts” was written to show the KGB had nothing to do with Lee Harvey Oswald, as they found him unsuitable for KGB intelligence work. Nechiporenko used exculpatory language, boring, bureaucratese narrative to reveal and explain archival documents that exonerate the KGB from having had anything to do with President Kennedy’s assassination. This denial appears to be truthful according to the available information we have, including the Mitrokhin Archives. In addition, Nechiporenko also describes Oswald truthfully as a fanatic communist determined to go to Cuba. The critical time Oswald spent in the Soviet embassy in Mexico in the weeks prior to the JFK assassination is described in convincing detail, and I have come to believe Nechiporenko, as an eyewitness and a participant in the affair, is truthful in his account. This information has now been fully validated by other sources. Nevertheless, this vital account has not been well received by many of the most recalcitrant conspiracy theorists, although it seems to be correct and consistent with the course of events.

Unfortunately, Parts 2 and 3 deal with speculative, bizarre, discredited conspiracy theories, and the book rapidly deteriorates! Col. Oleg Nechiporenko’s main sources are tendentious, bent on pointing fingers at non-existent right-wing conspiracies: Jim Garrison, the flamboyant, discredited New Orleans District Attorney; Jim Marrs’ “Crossfire; “JFK,” the movie by Oliver Stone, all of whom he quotes in footnotes. But to his credit, he also read the Warren Commission and was aware of Edward J. Epstein’s book, Legend.

As a “loyal” ex-KGB officer, Oleg Nechiporenko wrote the book (with the assistance and permission of Russia’s intelligence services), it seems, to squelch any doubts as to the KGB’s involvement in the Kennedy’s assassination, as well as to point fingers elsewhere: A grand conspiracy of the CIA, FBI, anti-Castro-Cubans, the Military-Industrial complex, using Lee H. Oswald as a “patsy”… I wasn’t sure I would be able to finish Part 3 — and not finishing a book, once I start is extremely rare for me. I usually plow through to the bitter end. But I did finish the book!

If you want to more read informative, intriguing, and suspenseful books on this subject, I recommend, 1) Legend by Edward J. Epstein (1978), which as written from the “right” side of the political spectrum, and 2) Oswald’s Tale (1995) by Norman Mailer (from the left side of politics). The most authoritative book is also the most enthralling on the subject: Case Closed — Lee Harvey Oswald and the Assassination of JFK by Gerald Posner. The most recent new material is contained in Castro’s Secrets — The CIA and Cuba’s Intelligence Machine (2012).

Nechiporenko’s book does have illustrations, particularly of its author and an index, which compensate to some degree for the serious shortcomings in the book as I have already mentioned. Although there is some valid, firsthand information in Part 1, I am not able to recommend this book for general readers because of the extensive, speculative disinformation in Parts 2 and 3, written obviously to pander to the many conspiracy theorists of the left, as well as to further (needlessly) exonerate the Soviets, including Nechiporenko himself by pointing fingers elsewhere, and to serve Nechiporenko’s persistently unrepentant,  communist ideology.

This article may be cited as: Faria MA. Passport to Assassination: The Never-Before-Told Story of Lee Harvey Oswald by the KGB Colonel Who Knew Him. HaciendaPublishing.com, January 4, 2012. Available from: https://haciendapublishing.com/passport-to-assassination-the-never-before-told-story-of-lee-harvey-oswald-by-the-kgb-colonel-who-knew-him/.