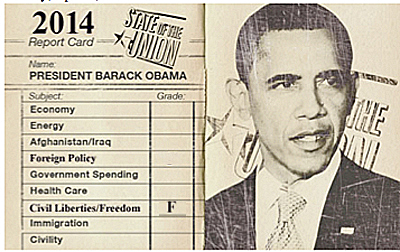 A week or so ago we discussed Obama’s Mid-term Report Card on foreign policy. It was the opinion of most readers of GOPUSA.com that the sitting President received a solid “F, ” failing grade. Today, we look at his job of protecting the civil liberties and personal freedom of Americans; in other words, his observance of the Bill of Rights and constitutional rights. Once again, it is not a pretty picture, but in all fairness, Obama is not solely at fault here. The Democratic Party, which he heads with Nancy Pelosi in the U.S. House of Representatives and Harry Reid in the U.S. Senate — and more than a few accommodating Republicans, particularly in the Senate — are probably as much to blame for the erosion of freedom in this country and President Obama’s consequent report card grade in this area.

Promulgation of Socialism at the Expense of Economic Freedom

Profligate government spending (with record budget deficits and the  astronomical increase in the national debt) has taken place with loss of economic freedom, increased taxation, and welfarism — all hallmarks of socialism and authoritarianism. This should count in the area of loss of civil liberties because citizens are entitled to the fruits of their labor and taxation should be minimal to run a constitutional government in which all citizens pay their fair share. Today nearly 50 percent of Americans pay no federal taxes, while the other 50 percent pay 97 percent, and the top 25 percent pay 86 percent of all taxes. This form of income wealth-redistribution should certainly fall under loss of economic freedom, and should also be discussed under domestic socialism.

As to further empower government at the expense of the liquidity of American entrepreneurs and taxpayers, in 2012, Obama recruited 15,000 new IRS agents to enforce compliance provisions in ObamaCare. This is reminiscent of Thomas Jefferson’s complaint in the Declaration of Independence of the swarms of Officers sent by King George and the British Parliament to sap out our substance. Wealth redistribution and government largesse continue to keep those mired in the liberal plantation, as well as to entrap more Americans and enroll them into the folds of government dependency.

Attempt at Circumventing the Second Amendment with Unlawful Gun Control

It is no secret that Obama and his allies in the Senate have attempted to use the UN, the UN Small Arms Treaty, and the treaty power under the U.S. Constitution to circumvent the Second Amendment. The U.S. Senate, led by conservative Republican senators, has done its duty and blocked this attempted usurpation of power at the expense of the right to keep and bear arms. This UN treaty was a backdoor attempt to bring about massive restrictions on U.S gun rights (e.g., registration of all and banning of certain firearms, licensure, mandatory destruction of certain guns and ammunition, etc.) relying on the abuse of the treaty power of the U.S Constitution.

The UN Small Arms Treaty was not the only scheme used to attempt to restrict the constitutional right to keep and bear arms and bring about gun control. The Justice Department used the Bureau of Alcohol, Tobacco, and Firearms (ATF) to conduct the infamous “Fast and Furious Operation” to sell guns to Mexican drug lords, and then to use the excuse of the increase in gun violence across the border to bring about gun control in America by yet another route.

Infringement Upon Freedom of the Press and the Electronic Media

Earlier this year in February 2014 , the Federal Communications Commission (FCC), currying favor with the Obama White House, also attempted to pressure media organizations into covering certain politically correct stories, study perceived bias in media coverage, and plainly immerse itself into newsrooms across the country. According to the Wall Street Journal, the purpose of the FCC wading into the newsrooms was to “ferret out information from television and radio broadcasters about ‘the process by which stories are selected’ and how often stations cover ‘critical information needs,’ along with ‘perceived station bias’ and ‘perceived responsiveness to underserved populations.’ “

This FCC attempt at infringing on the electronic press ultimately failed in response to mounting criticism. Last year, Obama also responded to equally mounting criticism of the Justice Department’s seizure of news reporters’ phone records. In May 2013, Fox News reported: “Not only did the department secretly obtain two months of phone records from the Associated Press, but it seized phone records from several Fox News lines — and labeled one correspondent a criminal ‘co-conspirator’ in its successful effort to seize his personal emails.” Obama once again had to backpedal, claiming he was “troubled” and ordered Eric Holder “to review guidelines” in response to the controversy. Following all of these shenanigans, Americans must wonder about the Obama administration’s sincerity and adherence to the freedom of the press most liberals revere (at least when it is in their interest to do so).

Americans have the right of privacy as well as those guaranteed in the Fourth Amendment. We must recognize the necessity to protect and preserve our national security but we must balance it with the need to also preserve individual freedom and personal privacy. We have the U.S. Constitution as a guide; for example, the Fourth Amendment reads: “The right of the people to be secure in their persons, houses, papers, and effects, against unreasonable searches and seizures, shall not be violated….” If we were to tilt slightly one way or the other, we must tilt the balance in the direction of preserving personal freedom and privacy. The alternative is government tyranny.

Domestic surveillance in the form of the NSA wiretapping of citizens smacks of a police state, and needs to be curtailed, but not dismantled completely, as it is necessary against foreign enemies.

In the case of Edward Snowden, frankly, I believe he committed treason — by his own admission divulging national security secrets to the world, secrets that could harm the U.S. and endanger Americans throughout the world. Snowden then shamefully sought and obtained sanctuary in a foreign country, a country which has not been too keen to preserve the civil liberties of its own citizens! Nevertheless, eavesdropping on private conversations and wiretapping are not constitutional prerogatives the federal government can use with impunity against American citizens, particularly in their own country.

Obama has wanted to have it both ways, sending mixed signals, denying government violations of citizen civil liberties, doing little to defend the actions of the NSA, and yet in July 2012, Obama quietly signed an Executive Order allowing the White House to control private communications in the country in the name of national security. There is no doubt he has been aware of the NSA activities but he has made no serious effort to clarify the issue. Perhaps a better explanation is that Obama is afflicted with troublesome ambiguity about America’s friends and foes. The American middle class seems to be Obama’s punching bag, while America’s foreign adversaries, such as Iran and Russia, are treated with kid gloves.

Infringement Upon Freedom of Speech and Intimidation of Political Opponents

Let’s also not forget Obama supported and orchestrated (all the while denying it) the infamous Section 1021 of the National Defense Authorization Act (NDAA), mandating detention of U.S. citizens as suspects by the military, increasing government oversight of the Internet, and other policies that undermine the personal freedom and privacy of Americans.

Years ago during the administration of President Bill Clinton and the corrupt reign of his Attorney General, Janet Reno, I wrote an article entitled, “Are We the Enemy?” It seems in the last two decades, when Democrat presidents are in office, the American middle class becomes the enemy. For the Clinton administration, it was the nefarious “militia” and those who refused to be shaken down, for ostensibly not wanting to contribute “their fair share.” For Obama, the enemy seems to be “suspected Americans,” who continue “to cling to guns and religion.” These “suspected Americans” are then subject to spying by the NSA and possible detention by the powers granted by the NDAA.

Another penchant of liberal Democrat presidents is that of using the Internal Revenue Service (IRS) against political opponents. This was used by the Clinton administration to intimidate Republicans and conservatives, and now the Obama administration is doing the same. Tea Party activists, the distinguished academic Dinesh D’Souza, the eminent neurosurgeon Dr. Ben Carson, and many other individuals or political groups in the opposite side of the political spectrum — have all been subjected to this treatment in attempts to silence their voices or to punish them for their political opinions. Like Janet Reno before him, Attorney General Eric Holder’s Department of Justice has not been too keen in protecting the civil liberties of the opposition or to enforce “equal protection under the law.”

In conclusion, the Obama presidency has done little to protect the American people and much to advance collectivism, ignoring Thomas Jefferson’s admonition (when he wrote to E. Carrington in 1788), “The natural progress of things is for liberty to yield and government to gain ground.” Thus, we as Americans are ending up with less liberty and more oppressive government. The president should be graded accordingly by the readers of GOPUSA in Obama’s Mid-term (Spring 2014) Report Card on the subject of personal freedom!

Note: As before, this early mid-term report card is obviously incomplete, but it can be added to and amended as needed by the alert and vigilant readers of GOPUSA by adding comments at the end of this article about other Obama infractions in personal freedom that I may not have mentioned or neglected to bring forth. Hopefully, we will also have an Obama Report Card on domestic issues soon!

The photographs used to illustrate this commentary came from a variety of sources and do not appear in the GOPUSA.com article.