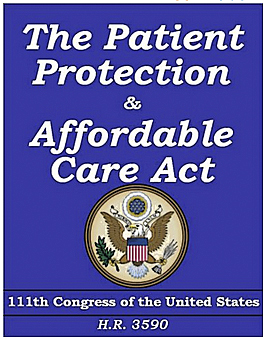 ObamaCare — Another step toward corporate socialized medicine in the U.S.

The Patient Protection and Affordable Care Act (2010), more commonly referred to as ObamaCare, has become one of the most controversial pieces of legislation passed by the Democrat-controlled, 111th U.S. Congress during President Obama’s administration.

Despite significant political opposition and poll-after-poll evincing the American people’s strong dissatisfaction with a health care plan that was correctly seen as further socializing American medicine, ObamaCare [Figure 1] was passed by the two houses of the U.S. Congress and signed into law by the president on March 23, 2010.

One stated goal of the plan is ostensibly to “expand access to insurance for nearly 30 million Americans.” And to accomplish this ”reform,” the Obama administration has introduced the elements of compulsion — and more ominously, unconstitutional powers.

But perhaps the most egregious section of ObamaCare is to force uninsured Americans to purchase medical insurance. Noncompliance with this “reform” will trigger heavy fines imposed by the federal government as a penalty. This is referred to as the health insurance mandate, and it is quite different from National Health Insurance as in Canada (2,3,11), National Health Service as in Great Britain (6), or socialized medicine in France, Germany, and Japan.(12,16)  Thus, I make a relative distinction between the Obama administration’s plan for health care as corporate socialized medicine (i.e., public-private, corporativist partnerships) and the fully socialized medicine as in most European countries.(7-10)

The price of socialized medicine in every country in which it has been implemented is the usurpation of liberty, the erosion of individual autonomy, the gradual loss of the freedom to choose — working in parallel with the rationing of medical services and technology because the raison d’être of socialism is to control the population by depriving the people of freedom and keeping them subservient and dependent on the State.

The free enterprise system in the United States has traditionally relied on free choice in a free market place, whether we are talking about buying a home, an automobile, computers — or medical care. Government compulsion and social engineering are not well received by free marketeers and individualists in our society.

Small steps, incremental “reforms,” have taken place in American medicine via increased rules and regulations regarding utilization and rationing of services, coverage, and payments to physicians, etc. But further large-scale attempts to socialize American medicine have been repeatedly defeated since 1965, when Medicare (i.e., health care for the elderly) and Medicaid (i.e., health care for the indigent) were instituted.(4,5,9) A good example of this rejection of socialized medicine was the failed attempt by President Bill Clinton to revamp the U.S. health care system in 1993-1994. The Health Security Act of 1993 was a grandiose effort to further socialized American medicine in a corporativist direction,(8-10) and was dubbed “HillaryCare” because the effort was led by former First Lady Hillary Clinton [Figure 2], who serves today as President Obama’s Secretary of State.

If There Was So Much Opposition to ObamaCare, How Did It Get Through Congress?

The Patient Protection and Affordable Care Act was introduced in the U.S. Congress in September 2009 when the Democrat Party still had majorities in both Houses of the American Congress. Despite those majorities, the Republican Party (GOP; “Grand Old Party”) was able to introduce several amendments and mount significant opposition to the legislation.

ObamaCare passed in the House of Representatives on October 8, 2009. The Senate then took up consideration of the bill and passed it “with amendment” on December 24, 2009.

According to the U.S. Constitution, when a bill that has already been passed by one house of congress is altered or has amendments added to it by the other house, then the bill must return to the originating house to be re-voted on and passed again with those changes or amendments. Because the Senate version of the ObamaCare bill passed “with amendment,” the bill had to go back to the House of Representatives to be reconsidered and re-voted on.

Likewise, if the House made any further changes or added any new amendments, the bill would then bounce back to the Senate for a re-vote. This process may seem unnecessarily cumbersome to foreigners, but the American Founding Fathers in their wisdom devised this method so that thoughtful consideration could be given to the making and passage of laws, and thus, hopefully preserve our constitutional republic.

However, the legislative shenanigans used by the Speaker of the House of Representatives, Nancy Pelosi (D-CA), and her counterpart in the U.S. Senate, Majority Leader Harry Reid (D-NV), to get the amended ObamaCare legislation finally through congress turned that process upside down. Even the Washington Post, not usually considered a “conservative” publication, astoundingly reported that Speaker Pelosi was willing to do anything to ram the bill through Congress in 2010.(13)

Time was of the essence because 2010 was also a mid-term election year in the United States. Given the growing voter dissatisfaction with the Obama administration, the slow economic recovery, and the mounting opposition to this bill, the makeup of one or both houses of congress could potentially change in early 2011. This political consideration added great urgency to the need to get ObamaCare passed once and for all and signed into law before any of the newly elected congressional members were sworn in.

So, Here Is What Transpired:

In 1974, Congress created a special methodology for balancing the budget, whereby the U.S. Senate could reduce the escalating budget deficit with a simple majority vote (i.e., 51 votes), rather than requiring the usual 60 votes that are needed to stop a filibuster. Under this Senate rule, the expediting process was called “reconciliation,” but it was only to be used for balancing the budget.

First, President Obama and his Democrat congressional leaders, Pelosi and Reid, attempted to change the rules to effect passage of this legislation at any price. They used budget “reconciliation” rules to bypass the planned GOP Senate filibuster that would normally have allowed the Republicans to defeat the legislation with 41 Senate votes. (The 41-vote possibility became a potential reality when Massachusetts elected a Republican, Scott Brown, to the U.S. Senate on January 19, 2010.)

Second, the Democrat congressional leaders invoked a convoluted concept of “procedural rules,” to make sure one way or the other President Obama could get this cherished piece of legislation through Congress (Figure 4).

The Washington Post article expounded the convoluted methodology as follows:

And that convoluted way of thinking did not even include Speaker Pelosi’s “most revealing” comment expressed during an interview on Fox News on March 9, 2010: “We have to pass the health care bill so that you can find out what is in it.”(15)

So, to make the story brief, the socialist members in the U.S. Congress were willing to do anything to pass and have signed into law what Vladimir Lenin deemed “the keystone in the arch of socialism” — government control of medical care!

The ObamaCare legislation again passed in U.S. House of Representatives on March 21, 2010 by a tight vote of 219-212, with 34 Democrats and all 178 Republicans voting against the bill! President Obama signed it into law two days later (Figure 5).

The fact that the legislation was quickly repealed in a largely symbolic gesture by the newly elected House in a 245-189 vote that January 2011 tells how unpopular the law was and remains. President Obama was happy to take credit for ObamaCare when he thought the American people would approve of it with time; but in the intervening years that has not happened. Therefore, many of President Obama’s followers are now distancing themselves from the law they helped create!

The U.S. Constitution, unlike the constitutions in other countries or other forms of government, limits the power of the federal government to specifically enumerated powers. Powers that are not specifically granted by the constitution are not authorized. Additionally, the first Ten Amendments to the U.S. Constitution, enshrined as the Bill of Rights, even forbid Congress from passing laws restricting individual freedom. For example, the First Amendment reads, “Congress shall make no law respecting an establishment of religion, or prohibiting the free exercise thereof; or abridging the freedom of speech, or of the press; or the right of the people peaceably to assemble, and to petition the Government for a redress of grievances.” The Second Amendment forbids the government from disarming law-abiding citizens, etc.

It has been stated that the “Welfare Clause” in the Preamble to the U.S. Constitution authorizes Congress to distribute entitlements and to redistribute wealth in the form of socialism. But in discussing this clause, Thomas Jefferson wrote, “a distinct substantive power, to do any act which might tend to the general welfare, is to render all the enumerations [of their specific constitutional powers] useless, and to make their power unlimited.”

And James Madison, the “Father of the U.S. Constitution,” in a letter to fellow patriot Edmund Pendleton dated January 21, 1792, wrote: “[If] Congress can do whatever in their discretion can be done by money, and will promote the General Welfare, the Government is no longer a limited one, possessing enumerated powers, but an indefinite one, subject to particular exceptions.” In other words, there is no authorization in the U.S. Constitution for the implementation of socialism in America.

Likewise, our constitution does not authorize the federal government to take over the U.S. health care system. To legally justify the implementation of ObamaCare, particularly the section that forces American citizens to buy health care coverage, congressional democrats and the president have used the (interstate) commerce clause of the constitution (that empowers congress to regulate the interstate commerce among the individual states of the nation).

Again, this “broad construction” (interpretation) of the constitution is tantamount to a usurpation of power that would erase the limits of authority set for the federal government by the framers of our constitution. Nor have specific contravening amendments been passed to legally alter those constitutional limits.

The limits have been exceeded only by the judicial activism of court rulings, based on the two aforementioned broad interpretations of the “General Welfare” and “Commerce” clauses. The intention of the Founders was never for congress or a complicit activist Supreme Court to use commerce and trade between the states to wantonly approve unconstitutional federal legislation.

As a result, a majority of the states acting individually, as well as numerous civic and professional organizations, have filed lawsuits in federal court challenging the constitutionality of ObamaCare.(1) The U.S. Supreme Court (Figure 6) has agreed to review the lawsuits in March 2012 “as part of the three days of public oral arguments scheduled for March 26-28. There, lawyers for the Obama administration and a coalition of 26 states and private groups will separately plead their case on the health care law’s legal limits.”(14)

Let’s hope reason and constitutionality prevail, and that at least part, if not all, of the most egregious sections of ObamaCare are declared unconstitutional and repealed by the U.S. Supreme Court.

Dr. Miguel A. Faria is a former Clinical Professor of Surgery (Neurosurgery, ret.) and Adjunct Professor of Medical History (ret.) Mercer University School of Medicine; Member Editorial Board of Surgical Neurology International (2011-present); Recipient of the Americanism Medal from the Nathaniel Macon Chapter of the Daughters of the American Revolution (DAR) 1998; Ex member of the Injury Research Grant Review Committee of the Centers for Disease Control and Prevention (CDC) 2002-05; Founder and Editor-in-Chief of the Medical Sentinel (1996-2002); Editor Emeritus, the Association of American Physicians and Surgeons (AAPS); Author, Vandals at the Gates of Medicine (1995), Medical Warrior: Fighting Corporate Socialized Medicine (1997), and Cuba in Revolution: Escape From a Lost Paradise (2002).

This article may be cited as: Faria MA. ObamaCare — Another step toward corporate socialized medicine in the U.S. Surgical Neurology International 2012 3(1):71-71. Available from: http://surgicalneurologyint.com/surgicalint_articles/obamacare-another-s…

An edited version of this article was published in GOPUSA.com on March 20, 2012.