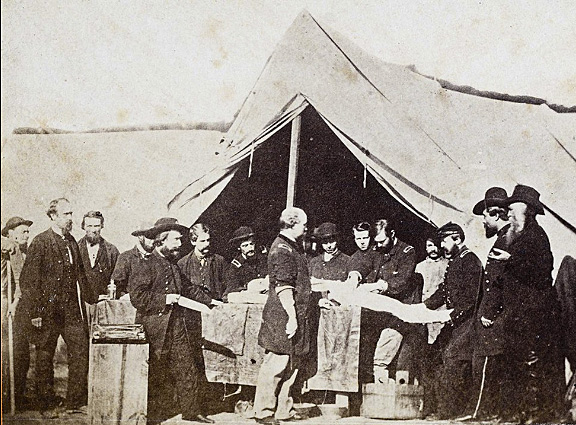 Medical Politics During the Civil War

The Civil War’s immediate impact was felt mostly in America. It ended slavery, preserved the union, and in time reaffirmed the natural rights of man first proclaimed distinctly by the English physician-philosopher, John Locke (1632-1704). Locke is perhaps the foremost proponent of individual rights in the history of Anglo-American jurisprudence. He wrote that all human beings were equal and free to pursue “life, health, liberty and possessions.” He influenced our Founding Fathers immensely:

When in the Course of human events, it becomes necessary for one people to dissolve the political bands which have connected them with another, and to assume among the powers of the earth, the separate and equal station to which the Laws of Nature and of Nature’s God entitle them…We hold these truths to be self-evident, that all men are created equal, that they are endowed by their Creator with certain unalienable Rights, that among these are Life, Liberty and the pursuit of Happiness. That to secure these rights, Governments are instituted among Men, deriving their just powers from the consent of the governed….

The shot fired at Fort Sumter at 4:30 a.m. on April 12, 1861, meant that the time of reckoning had finally arrived, and the account owed to the inherent natural rights of man that the Founding Fathers knew would have to be settled sooner or later — was to be finally paid in full with the precious blood of American brethren, Northerners and Southerners.

Although General George B. McClellan (1826-1885), “the Little Napoleon,” has been given little credit for his accomplishments during the American Civil War, the fact of the matter is that he reorganized and built the Army of the Potomac into a massive and mighty fighting force. He also allowed the tremendous reorganization of the military medical corps, transforming it into a veritable first-class military medical care system, following the footsteps of Napoleon’s greatest surgeon, Dominique-Jean (Baron) Larrey (1766-1842), under the leadership of 1st Lieutenant William Alexander Hammond (1828-1900). Hammond was recommended to General McClellan by the Civilian Sanitary Commission, which was impressed with the efficiency and organization with which he served as Army Assistant Surgeon just prior to the Civil War. Hammond was thus appointed Surgeon General on April 25, 1862, and his invaluable associate, Jonathan Letterman, M.D. (1824-1872), was appointed Medical Director of the Army of the Potomac on July 4, 1862. The two men supported by General McClellan developed the first ambulance unit, field supply systems, full hospitals and corps inspectors. This efficient ambulance system functioned in the tradition of the celebrated ambulance volante, the “flying ambulances” of Baron Larrey, to expedite transportation of the wounded and facilitate medical treatment of wounded soldiers.(1)

And the difference was dramatic. After the First Battle of Bull Run (July 18, 1861), the wounded were left on the bloody battlefield for days without medical attention. This was not to be the case after the battles of Antietam, Sharpsburg and Fredericksburg, bloody as these battles were for both sides especially the Union forces. Dr. Hammond’s reforms were invaluable and were only impeded by the jealousy and rivalry of the Secretary of War Edwin M. Stanton, who has been charged with deliberately suppressing Hammond’s projects.(2) As a result, Dr. Hammond was unjustly dismissed (August 1863) and Dr. Letterman resigned (November 1864) — leaving, nevertheless, a reorganized, efficient, and effective medical corps. After his dismissal, Hammond was practically destitute and in debt, having devoted most of his career to military service. Hammond left for New York where he went on to become a pioneer in the study of nervous and mental diseases. He organized the American Neurological Association, and, along with Dr. S. Weir Mitchell, elevated the emergent field of neurology to the level of a specialty in U.S. medicine. Hammond wrote A Treatise on Diseases of the Nervous System (1871), which remains a neurology classic.

In 1878, the Congressional Military Affairs Committee exonerated Hammond, and U.S. President Rutherford B. Hayes (1877-1881) restored him to the rank of Brigadier General, retired in 1879. Hammond’s legacy is a cornucopia of contributions: His monumental Medical and Surgical History of the War completed years later improved medical military standards; impetus for the completion of the military library, medical museum, and Army Medical School — not to mention his work in neurology that culminated in the founding of the U.S. Army Hospital of Diseases of the Nervous System.

Letterman, his trusted and able assistant, left his own individual and notable contributions to military medicine, including his book, Medical Recollections of the Army of the Potomac (1866).

In the South, the field experiences of Dr. Samuel Preston Moore of Charleston, South Carolina, who headed the Confederate Medical Department and who published several volumes on military surgery, were legendary. Dr. John Julian Chism, South Carolina’s leading surgeon, declared that the major causes of morbidity and mortality in the Confederacy in the latter part of the war were due to exposure, fatigue, scarce food, foul water, and poor sanitation. Dr. Chism advocated cleansing and primary closure of wounds to promote wound health.(3) The infection of wounds was the leading cause of mortality in wounded soldiers as well as operative surgery during the Civil War.

The Union delivered the mortal blow to the Confederacy when the transport systems were interrupted and manpower and medical supplies became scarce or non-existent. Medical care and sanitation in southern hospitals became deplorable. Yet, despite all of this suffering and death, northern and southern doctors continued to perform their duty in the service of their respective countries.

Additional Reading on the Civil War

Miguel A. Faria, Jr., M.D. is an Associate Editor in Chief and World Affairs Editor of Surgical Neurology International (SNI). He is Clinical Professor of Surgery (Neurosurgery, ret.) and Adjunct Professor of Medical History (ret.), Mercer University School of Medicine. Dr. Faria was a member of the Injury Research Grant Review Committee of the Centers for Disease Control and Prevention (CDC; 2002-05). He is the author of Vandals at the Gates of Medicine (1995); Medical Warrior: Fighting Corporate Socialized Medicine (1997); and Cuba in Revolution: Escape From a Lost Paradise (2002). His website is: https://haciendapublishing.com.

This article may be cited as: Faria MA. Medical politics during the Civil War. HaciendaPublishing.com, February 20, 2016. Available from: https://haciendapublishing.com/medical-politics-during-the-civil-war/