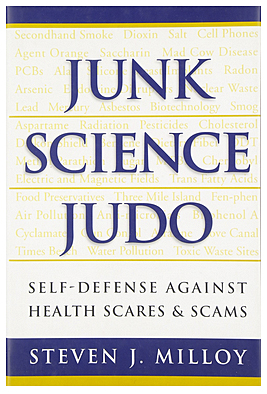 There are three kinds of lies — lies, damned lies, and statistics.
Mark Twain

Junk science is the abuse of science by health scare con artists. It is fraud perpetrated to advance a special interest, or more likely, a political agenda. Junk science hurts us all, causing a significant negative impact on the quality of our life. For example, during the early 1990s a massive cholera outbreak in Latin America caused 10,000 deaths as a result of countries refusing to use chlorine to disinfect water supplies because of the labeling of chlorine as a carcinogen by the United States Environmental Protection Agency (EPA).(1) Likewise, millions of people die every year because DDT cannot be used against the mosquitos that cause malaria.

Steven J. Milloy, a scholar at the Cato Institute, in his instructive book Junk Science Judo reveals who the junksters are, how they operate and how to fight them. As he shows, “…all’s fair in love, war — and junk science.”(2) The dishonest junksters place their agendas ahead of the facts. They’re out for themselves and they don’t care about science or about your welfare. They routinely cheat and use deception by using faulty data and analysis.

The media nearly always play a key role in these health scams. They trumpet junk science and have breached the line between news and entertainment. Most viewers accept the news as truth, whereas the news really is just another TV show striving for ratings and responsible to the financial bottom line. After all, Peter Jennings, Tom Brokaw and Dan Rather compete for 30 million viewers daily.(3)

The scientific method originated from advances in the sixteenth century. Early thinkers such as Copernicus, Paracelsus and Vesalius departed from dogma and led us to the Renaissance and the Scientific Revolution. Sir Francis Bacon in 1620 popularized and promoted what later became the scientific method.(4) A hypothesis, if confirmed, is elevated to a theory which, if confirmed, is elevated to a law. Under the scientific method, the burden of proof is on the party advancing the hypothesis, not on the reader. In fact, “proving the negative” is a logical impossibility.(5) Since junk scientists usually can’t prove anything, they use the precautionary principle — which means taking precautions against the unproven threat, “better safe than sorry.”

Setting a human exposure level to a chemical on the basis of a lab animal experiment involves several major assumptions and is certainly a leap of faith. In the 1970s, a flood of laws was enacted mandating the establishment of human exposure levels to potentially hazardous substances.(6) The EPA chose to use default assumptions where the standards were arbitrarily set much lower than was justified by scientific knowledge.

Many scams and scares are carefully documented in the book. For example, in 1975 research showed a cancer-causing effect of polychlorinated biphenyls (PCBs) in rats. The ensuing panic led to the 1976 federal law banning their production. In 1999, the same researcher found no association with human cancer. But the federal law remains in force.(7)

In a 1979 New England Journal of Medicine (NEJM) article, Herbert Needleman of Harvard Medical School claimed that low-level lead exposure caused lower IQs in children. Subsequently, an EPA panel found no association, and a University of Pittsburgh panel found “deliberate misrepresentation” by Needleman. It turns out that there is no measurable association between lead exposure and IQ.(8)

In 1986, “consumer” activist Ralph Nader promoted the Alar panic. The Phil Donahue Show and 60 Minutes were involved, and the Natural Resources Defense Council immediately realized a large increase in revenue. Never mind that the doses of Alar given to mice equated to a human drinking 19,000 quarts of apple juice every day for life.(9)

Perhaps the most tragic example of junk science was the cancer scare fraud perpetrated by Rachel Carson about the insecticide DDT in her 1962 book, Silent Spring. As a result, in 1972 the EPA banned DDT. The EPA administrator at this time was a member of the radical Environmental Defense Fund and based the ban solely on politics, not on science. The judge who had presided over seven months of hearings concluded that DDT was not a carcinogen to man and did not harm fresh water fish, birds or other wildlife.(10) Yet today, millions of people worldwide die every year because of the infamous ban.

Another area of junk science is the use of statistics to prove cause-and-effect relationships. As Bruce G. Charlton, M.D. has shown, this trend in academic medicine looks for answers to medical problems from experts in mathematical manipulation rather than from researchers who understand the disease. Statistics, which is concerned with correlations, can be applied to any problem but is not sufficient for hypothesis testing, which is the cardinal function of scientific research. This use of statistical malpractice bridges the gap in the transition from curiosity-led science to medical research which is driven by the bottom line of health policy and management.(11)

The primary reason for today’s use of junk science in preeminent medical journals such as the NEJM and JAMA is in part the liberal philosophy of the editors involved. Another reason is because in managed care, the flow of medical information to Americans has shifted from their physicians in the past to the news media today. Milloy suggests that editorial support for publishing an article, which was based only on scientific merit in the past, today also is driven by publicity and sensationalism.(12)

As the author points out, the following alleged associations never have been proven: cell phones and brain cancer; coffee and pancreatic cancer; coffee and heart disease; birth defects and exposure to many chemicals or to the popular anti-nausea drug Bendectin; pelvic infections and IUDs such as the Dalkon Shield; medical illness and silicone breast implants; and heart valve lesions and fen-phen.(13) In more than one instance, these allegations have led to the bankruptcy of a major, beneficial company.

Milloy also documents that cancer clusters occur by chance, that statistics are not science, that statistical correlations are not biological explanations, that the use of pesticides does not equal exposure to them, that exposure is not toxicity, that DDT does not cause cancer in man or harm birds, that Alar on apples — in spite of Ralph Nadar’s opinion — does not cause cancer, that dioxin is not a carcinogen (nor, in spite of CBS anchor Dan Rather’s 2000 report, does it cause diabetes). The “infamous” Love Canal was never shown to have any adverse health effects and Three Mile Island was not a nuclear disaster, although it did end the prospect of cheap and clean electric power in this country.(14) Finally, mice are not men, and basing public policy on poisoned animals without human experimentation is not rational.(15)

The people who profit from promoting junk science are highly motivated, well organized, and well financed. One of the ways to fight them is to learn what junk science is and how it operates. Another way is to require public disclosure of study data, as was proposed in 1999 by Dr. Miguel A. Faria, Jr., editor emeritus of the Medical Sentinel. The failure of any author to disclose this data should lead to suspicion about the reliability of the study since, as Milloy points out, scrutiny is a part of the scientific process.

Junk science always has existed – alchemy, astrology, and haruspicy (predicting the future by examining the livers of animals) were its early forms.(16) But its persistence today, when added to our culture of politically-correct medicine (the politicization of public health, and of our medical and nursing professions)(17) to our snitch culture (the destruction of our legal system)(18) and to our culture of death (the destruction of our traditional medical ethics),(19) is an alarming situation which bodes ill for our future.

Junk Science Judo is a wonderfully effective weapon to use in the meantime. By reading the book, you will earn your black belt for debunking junk science.

Dr. Arnett is associate editor of the Medical Sentinel, a medical ethicist, and a practicing pulmonologist in Elkins, West Virginia.